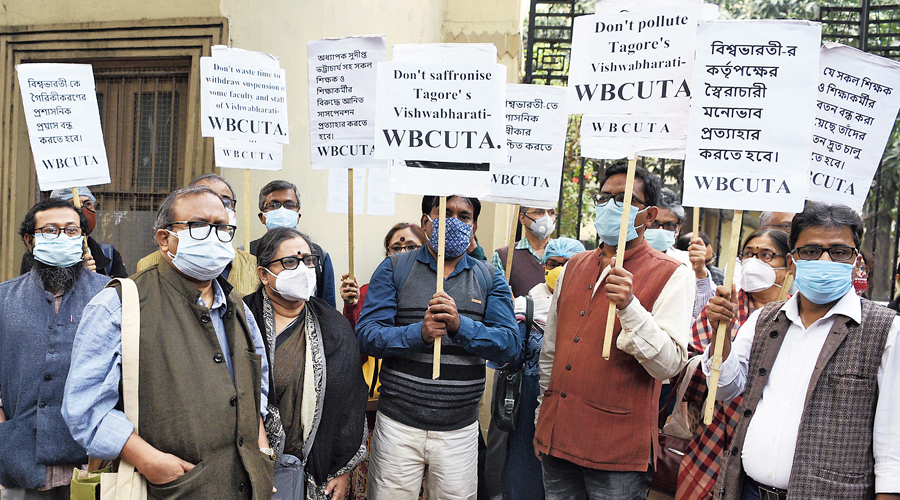 Teachers protest in front of Visva-Bharati’s office in Beckbagan on Wednesday.
Picture by Gautam Bose
Subhankar Chowdhury   |   Calcutta   |   Published 14.01.21, 02:27 AM

The Visva-Bharati authorities are keen to silence dissent and the suspension of economics teacher Sudipta Bhattacharyya bears testimony to that, said a group of teachers who assembled in front of the university’s publishing department office in Calcutta.

The perception on the Santiniketan campus is that Bhattacharyya has been penalised for the role he played in revealing how vice-chancel-lor Bidyut Chakrabarty had insulted Nobel laureate Amartya Sen.

The teachers, from various colleges and universities, alleged that the Visva-Bharati administration was trying to destroy the atmosphere of free thinking on the campus. They assembled under the banner “Right to Save Education Forum”.

Subhanil Chowdhury, a teacher of economics at the Institute of Development Studies, Kolkata, said the suspension of Bhattacharya — the president of Visva-Bharati Faculty Association — was not an isolated incident but part of a larger ploy to launch a sustained attack on institutes of higher learning so critical thinking can be nipped in the bud.

“I remember about a year back we, teachers, had organised a protest march on College Street against an assault on JNU teacher Sucharita Sengupta by members of the (RSS student wing) ABVP. They assaulted JNU students’ union president Aishe Ghosh as well. No one has been arrested till date. But here at Visva-Bharati, a teacher was suspended because he dared to raise some uncomfortable questions. The message is loud and clear — critical thinking will be nipped in the bud through sheer intimidation,” said Chowdhury.

Another teacher explained the necessity to curb critical thinking. “If you are not allowed to think critically, you will never try to find out whether the farm bills are good or bad. You will just give your consent to whatever a person or a dispensation in the country says. To do that, it is crucial the centres of critical thinking are silenced,” the teacher said.

A letter issued by Visva-Bharati said Bhattacharyya, who did his MPhil and PhD from JNU, was suspended because the university’s executive council had found him guilty of “misconduct by mass circulating a complaint and derogatory/defamatory/baseless remarks against a fellow employee and providing the copies of the same to high dignitaries by email”.

Teachers at the gathering in Beckbagan said Bhattacharyya became a target after lodging a complaint with the Prime Minister, who is Visva-Bharati’s chancellor, and President Ram Nath Kovind, who is the university’s visitor, about the appointment of the principal of one of the schools.

“Not only Sudipto Bhattacharyya, several teachers and employees have been suspended during the tenure of this VC.  The Visva-Bharati administration has created an atmosphere where no one will dare to speak against the insult meted out to Nobel laureate Amartya Sen, allegations of lack of transparency in appointments,” said Keshab Bhattacharya, the general secretary of the West Bengal College and University Teachers’ Association.

According to many on the campus, the authorities decided to go after Bhattacharya after the teachers’ association brought to the fore how VC Chakraborty had made some allegedly baseless claims about a purported telephone conversation with Amartya Sen, which the Nobel laureate later described as a “completely imagined conversation’’.