Scars left behind in the previous years 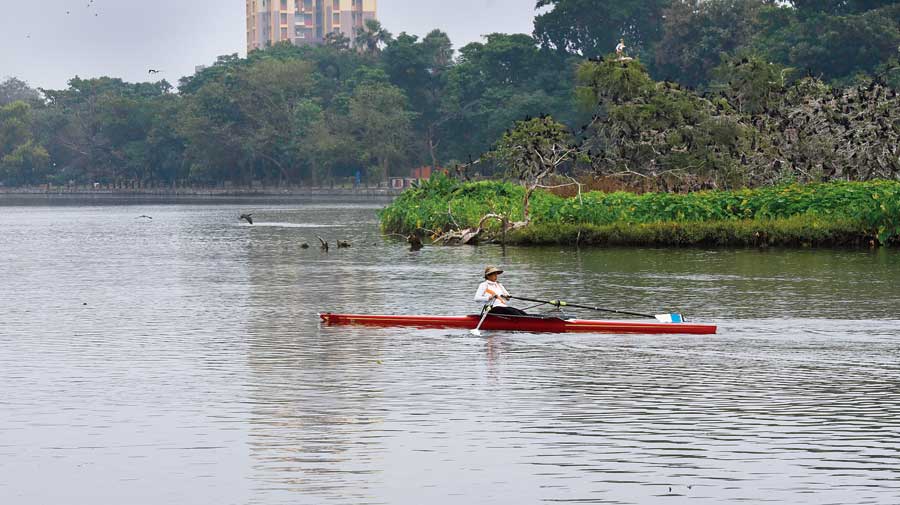 The impact of Chhath Puja rituals on the birds, animals, trees and the overall environment at Rabindra Sarobar in previous years is evidence enough why the puja should not be allowed on the banks of the water body, Sarobar regulars said.

Chhath Puja will be held over Friday and Saturday.

Scientists explained that the noise and emission from firecrackers, blaring music, pouring of oil and ghee and throwing of flowers into the water affect the birds, aquatic animals and the many other species that inhabit the 192-acre Rabindra Sarobar complex.

The place is home to three species of turtles, Common Toads, Bullfrogs, Cricket Frogs, Skittering Frogs, squirrels, about 60 species of butterflies, about 30 species of dragonflies and snakes.

There is a high court bar on loud celebrations this year. Last year, too, there was a bar on loud firecrackers, but it was flouted with impunity.

The National Green Tribunal has banned all pujas, picnics and other social events on the ecologically sensitive Sarobar premises. The Supreme Court will hear on Thursday a plea from the Calcutta Metropolitan Development Authority (CMDA), a Bengal government agency, to allow Chhath rituals on the Sarobar premises.

Worshippers burst firecrackers and play loud music during the rituals, which are performed at dusk and the next dawn. This is exactly when birds forage, said naturalist Arjan Basu Roy, founder of NGO Nature Mates.

“More than 100 bird species have been recorded at the Sarobar this year. Several Painted Storks, a threatened Indian species not seen at the Sarobar for many years, have been spotted. Noise from firecrackers will drive them away,” Basu Roy said. “Chhath Puja is performed at a time when birds go out for food. So the disturbance will make them feel more threatened.”

A birdwatcher said that in previous years birds would disappear from the Sarobar immediately after Chhath. “While some birds return, many migrants do not,” the birdwatcher said.

Worshippers also throw flowers into the water. “Flowers need oxygen to decompose. They consume the oxygen dissolved in the water,” Basu said.

On the one hand, the oil and the ghee prevent oxygen from mixing with the water and on the other, decomposing flowers consume dissolved oxygen. “The twin effects are very harmful for aquatic animals,” Basu said.

A dead Indian Flapshell Turtle was found floating at the Sarobar on the morning after Chhath Puja last year, said Sudip Ghosh, a daily visitor to the Sarobar. Naturalists said turtles are known to breed around this time of the year and lay their eggs on the shallow edges of the water body.

Basu Roy said Rabindra Sarobar had a good number of turtles, including Indian Roofed Turtles and Indian Tent Turtles. “Devotees enter the water to offer their prayers. This creates a natural conflict with the turtles breeding on the edges,” he said.

Thousands of people gathering in the Sarobar compound at the same time results in the facilities inside getting overwhelmed for a while. Ghosh had seen worshippers relieving themselves behind bushes last year.

“The number of publictoilets on the premises are far from enough compared with the turnout,” he said.

A naturalist said that it was foolish to expect that a religious festival, which takes the shape of a carnival, would be a disciplined affair.

Ghosh said he had seen worshippers breaking bamboo fencing surrounding some patches of gardens to go inside. Many newly planted trees get trampled in the process.

People also feast in the lawns. The disposable cutlery is often thrown into the water.

When firecrackers are burst, they emit smoke and chemicals. The toxic smoke can trigger respiratory distress in humans if they inhale it.

“The chemicals released by firecrackers settle down on the land and the water in the immediate vicinity.

These are harmful substances that enter the food chain of the organisms living there,” said Anumita Roy Chowdhury, the executive director of Delhi-based Centre for Science and Environment.

Chhath Puja should be allowed keeping in mind the Covid norms and the judgment of the court…. The government should observe the policy of justice for all and appeasement to none…. Law should be equal for all.

(Basu made some other comments that are not relevant to the protection of open spaces and  hence, have not been included here.)

We will abide by the court’s order, but at the same time we have to respect religious sentiments.

The government should comply with the order of the National Green Tribunal and make alternative arrangements for Chhath Puja. I do not believe that Chhath Puja devotees do not care about nature, about the environment. This is a ploy by Mamata Banerjee to give an impression that she loves Chhath Puja. This is being done to get votes.

We are saying that the government should implement the court’s order. We do not want Rabindra Sarobar to get polluted. But the government has gone to court, to the Supreme Court. Naturally they should abide by what the court says.

What Calcuttans have to say

Rituals that affect the biodiversity of any water body should not be allowed. I oppose the idea of performing Chhath Puja at Rabindra Sarobar. Why do we need to tamper with a natural water body? We have done many wrongs in the past. Why can’t we rectify our mistakes and take a more scientific approach?

I have seen dead birds and turtles at the Sarobar after Chhath Puja. I suspect they died because of pollution caused by the celebrations. In previous years, worshippers burst firecrackers, lit fire for yajnas and played loud music. After many years, a few Painted Storks have come to the Sarobar. What if they are forced to flee?

Sumita Banerjee,
activist who has been fighting for protection of the Sarobar

Rabindra Sarobar is home to hundreds of birds. The Chhath rituals can scare them away. Thirty minutes of loud music and firecrackers are enough to do the damage. It is true the present state government has done a lot to improve the Sarobar, but I do not understand why they are so keen on allowing Chhath there.

I had seen last year dead fish and a turtle floating in the water after Chhath Puja. The oil and the ghee poured into the water affect aquatic animals. Chhath Puja should not be allowed at the Sarobar keeping in mind the rich biodiversity of the place.

Reema Das,
resident of the area, who recently finished her BSc in geography