Calcuttans perform rituals at home or alternative sites this time 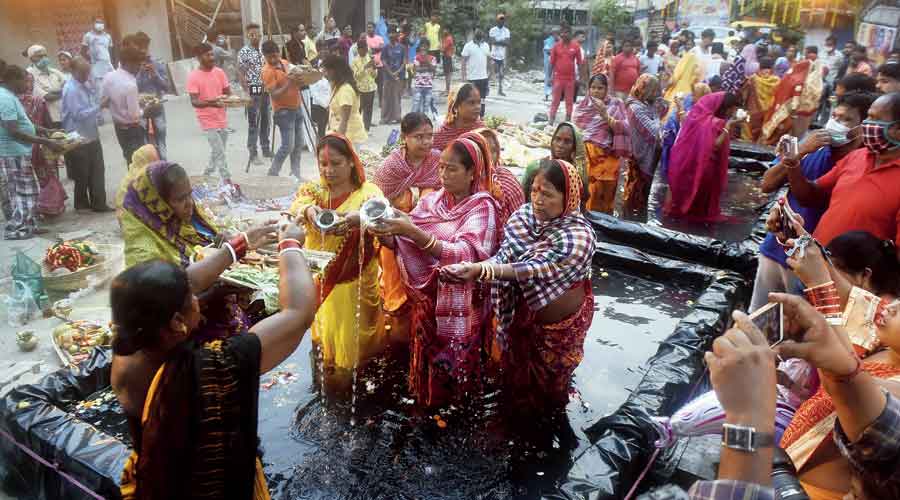 Calcuttans showed on Friday that Chhath Puja could be celebrated without defiling Rabindra Sarobar and Subhas Sarobar, as devotees who used to visit these two places performed the rituals at home or alternative sites this time.

Barring a handful of people who had gone to the gates of Rabindra Sarobar on Friday morning, no Chhath Puja devotee turned up at either of the Sarobars. The National Green Tribunal (NGT) and Calcutta High Court had issued directives on Chhath Puja, which included a ban on the rituals at these two places.

The state government took steps to ensure that the orders of the NGT and the high court were complied with.

Police personnel were posted at most gates of the two lakes, especially the ones that are used more.

A senior Calcutta police officer said 60 cops had been deployed around Subhas Sarobar and a little more than that around Rabindra Sarobar. The police had counselled Chhath worshippers at Kurigram slum, opposite Subhas Sarobar, to not visit the lake, said an officer of Phoolbagan police station.

On Friday, none of them tried to come towards Subhas Sarobar.

Subhas Datta, an environment activist whose petition against allowing football matches under floodlights at the Rabindra Sarobar stadium led to a series of developments and a ban on all pujas on the banks of the south Calcutta water body, said he was happy.

“There are two major factors behind the success in implementing the NGT’s ban. The Supreme Court’s decision to uphold the ban imposed by NGT by not issuing an interim order to allow Chhath Puja at the Sarobar had a psychological impact on people. Worshippers realised that it would not be right to violate a ban upheld by the highest court of the country,” he said.

“Secondly, the state administration showed its intent to implement the NGT’s ban, which was missing in previous years. This could be achieved after years of struggle. I am happy.”

The Supreme Court on Thursday declined to interfere with the directives passed by Calcutta High Court and the NGT banning Chhath rituals at Rabindra Sarobar and Subhas Sarobar and imposing restrictions on congregation of people for the festival.

The bench of Justices U.U. Lalit, Vineet Saran and S. Ravindra Bhat declined to entertain appeals against the earlier directions and said they were well-reasoned and there was no need to modify the orders passed on those directions.

The Calcutta Metropolitan Development Authority (CMDA), the custodian of the two Sarobars, had pleaded for an interim order to allow Chhath rituals at Rabindra Sarobar.

Policemen on guard at Subhas Sarobar on Friday
Bishwarup Dutta

Last year, a group of worshippers broke the locks on some gates of Rabindra Sarobar and entered the compound to perform the rituals, while the police looked the other way.

Deepak Thakur, a devotee who went to Rabindra Sarobar in the morning to find out whether the rituals could be performed there, later took his family to a water body in Golf Green for the puja. Another devotee, a resident of Lake Gardens, said he had built a temporary pool on the terrace of their apartment for the rituals.

Bir Bahadur Singh, a BJP leader in the Tollygunge-Rashbehari-Lake Gardens belt who claimed on Thursday that people wanted to perform the rituals at Rabindra Sarobar, said a large police presence was the reason why it did not happen.

“The police made it clear that they would not allow anyone to go inside, which is why people went to other places. But they wanted to perform the rituals at the Sarobar,” he said on Friday.

An official of the CMDA said the footfall at the temporary ghats they had built as alternative puja venues was more than double compared with last year. “Double the number of devotees visited ghats in Anandapur and at the Jodhpur Park lake than last year. There was a large turnout at the ghats built at a water body near Bengal Lamp in Jadavpur,” the official said.

Metro visited the Jodhpur Park lake, where the CMDA had built five wooden platforms for devotees to perform the rituals. A life-saving boat was doing the rounds. Bio-toilets and changing rooms were set up.

Sanja Jha, who performed the rituals at Rabindra Sarobar last year, was at the Jodhpur Park lake on Friday. He, however, complained that the water body was dirty. “It does not feel good to perform rituals in dirty water,” he said.