At Uniworld City in New Town, separate inflatable pools were provided to each family offering puja 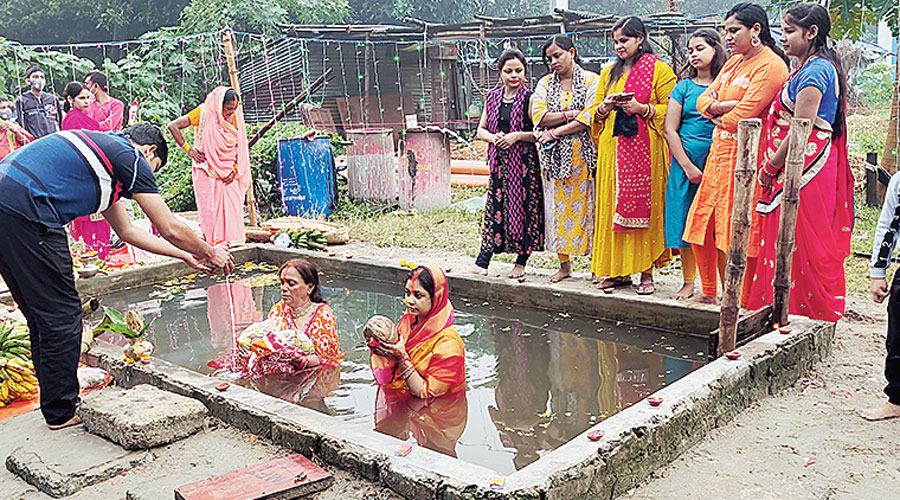 With the pandemic raging and the high court also taking a serious stand regarding maintenance of Covid protocol, Chhath puja went the Durga puja and Diwali way to be a much restrained affair this year.

In such a scenario, some housing complexes made their own arrangements to worship the sun god within their own precincts.

Around 15 families take part in Chhath puja in the complex. “We have a WhatsApp group. Since 2016, we are celebrating together,” said Pritesh Kumar, a resident.

In 2016 and 2017, they went to Upsana Ghat to offer puja. “But since it was so crowded, in 2018 we thought of doing this in one of the fountains in our complex. Its wall was raised from half feet to three feet, the water outlet was sealed and more water was pumped in,” Kumar recalled.

But this time, no two families were  allowed to get into the same waterbody. “We ordered 15 inflatable tubs online. The whole area was done up with lamps and incense sticks. There was even a dholak playing to accentuate the festive mood,” he added.

Shashi Bhushan Singh’s mother came all the way from Jharkhand to celebrate Chhath with her daughter’s family. “She expects a surprise regarding our arrangements every time she comes here for this occasion,” smiled Singh.

Two soops or trays of offerings
Sourced by the correspondent

At Baisakhi Abasan, in neighbouring Salt Lake, residents had expanded a water tank that had been built temporarily to soak bricks at a construction site. “I had been eyeing that tub ever since Chhath was drawing near,” smiled Shambhu Nath Jha, a resident who took the initiative to increase the size of the tank so that the vratis (those undertaking the vrat) would stay suitable distanced.

In other years, Jha travels to Sarada Ghat, in Bagbazar. “But it is very crowded and parking is a headache. We cannot even get space to place our dala of offerings on the bank,” he said.

The area near the tank was illuminated with bulbs and halogen lamps, and a music system played devotional songs. “The atmosphere was exactly like that on the river bank in other years.” To make the arrangement fool-proof for every believer, he added the 10 litres of holy Ganga water he had carried back from Hardwar in March to the tank.

Rain had threatened to play spoilsport on the final morning, November 21. “But thankfully, the shower stopped at 5.40am, with sunrise another 15 minutes away,” recalled Jha.

Both groups in Salt Lake and New Town are thinking of continuing with the practice even if there is no infection threat next year.