Nabarun De, who is survived by his wife, daughter and son, suffered a cardiac arrest 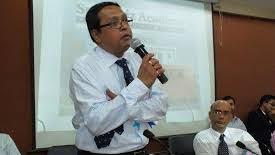 Central Modern School principal Nabarun De, who was an executive committee member of the ICSE council for close to a decade, died early on Saturday at his Salt Lake home. He was 55.

De suffered a cardiac arrest. He is survived by his wife, daughter and son.

He took over the reins of the Central Modern School, Baranagar, as principal in 2005 after the death of his father.

The executive committee is the decision-making body of the Council for the Indian School Certificate Examinations (CISCE).

“He was one of the five members of the executive committee and the only representative from Bengal. He played a pivotal role in taking decisions with regard to the council,” said Sujoy Biswas, national president of the Association of Schools for the Indian School Certificate Examinations.

On Saturday, teachers, staff, former students and parents went to the school to pay their tributes.

“He had granted over 20 per cent fee waiver to some parents in the initial days of the pandemic. Many of them came today,” said vice principal Sangeeta Basu.