Nidhi Sosa Kurian, 33, is stopping by farmlands, fishing villages, temples and markets — wherever she can interact with other women 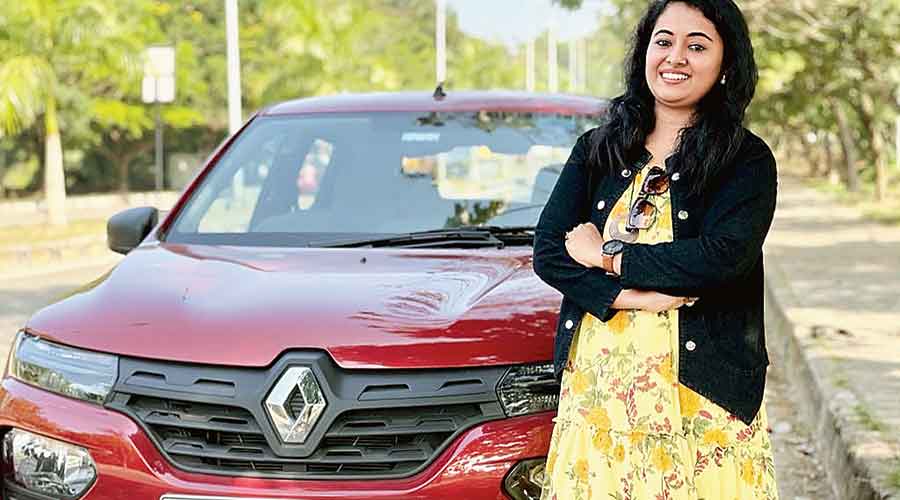 A woman from Kerala is touring the country in a car to gauge how safe India is for women.

Nidhi Sosa Kurian, 33, is stopping by farmlands, fishing villages, temples and markets — wherever she can interact with other women. Emerging out of the informal meetings are many stories of grit, determination and perseverance which Kurian hopes to retell the world in the future.

Kurian left her hometown, Kochi, on February 7 in a Renault KWID. She has already covered close to 3,700km, driving across places like Puducherry, Chennai, Vijayawada, Visakhapatnam, Puri and Bhubaneswar before entering Calcutta on February 20. She intends to complete her 25,000km journey in 100 days.

Kurian with a group of women in a mustard field off a highway in Odisha. The women packed food for Kurian after treating her to a sumptuous lunch

Kurian starts driving early and tries to reach a destination before evening. She spends nights at youth hostels, sometimes at hotels booked via an online aggregator. In Calcutta, she is living with her relatives in Ekbalpore.

Much of her journey centres around “exploring a place and its women”, ranging from a woman idol maker in Kumartuli to an artist in Odisha whose canvas is the coconut shell.

“There are so many stories that are worth telling. I have met so many fascinating women,” said Kurian, the creative head of a movie production house.

Kurian at a farmland near Santiniketan

In Andhra Pradesh, she spent time with fisher-women who “toil hard from dawn to dusk”.

“After collecting fish from a harbour, they bring the catch home to dry it under the sun. They are also the ones who sell it in the market,” said Kurian.

Days before entering Calcutta, she encountered a group of women at a mustard field off a highway in Odisha. The women, who were carrying lunch for their men tilling the farmlands, had invited Kurian for lunch. “They even packed me some food; complete strangers but full of warmth and hospitality,” said Kurian.

She had also stopped by a village of artists painting on coconut shells where “every house is like a mini handicraft gallery”. One of the artists was a woman, the only earning member of her family.

An “aged woman” who runs a small sweet shop outside Puri’s Jagannath temple has also left a lasting impression on Kurian. “Her husband is dead. She lives alone and works hard for a living. But her appetite for life is amazing,” said Kurian.

Kurian has a fairly lengthy stop in Calcutta, though this is her third visit to the city. She has already visited Kumartuli. On Wednesday, she drove to Santiniketan.

Kurien carries basic kitchen equipment, including a 5kg cylinder, in the boot of her car. She usually cooks a Spartan meal of rice and dal or some curry.

“I am not on a food trip but in Calcutta, I have made an exception. The street food here is the best and I will sample some,” said Kurien.

She will leave Calcutta this weekend, heading to the Northeast. Himachal Pradesh, Kashmir, Punjab, Delhi and Rajasthan are the next few stops. Kanyakumari is going to be the last destination.