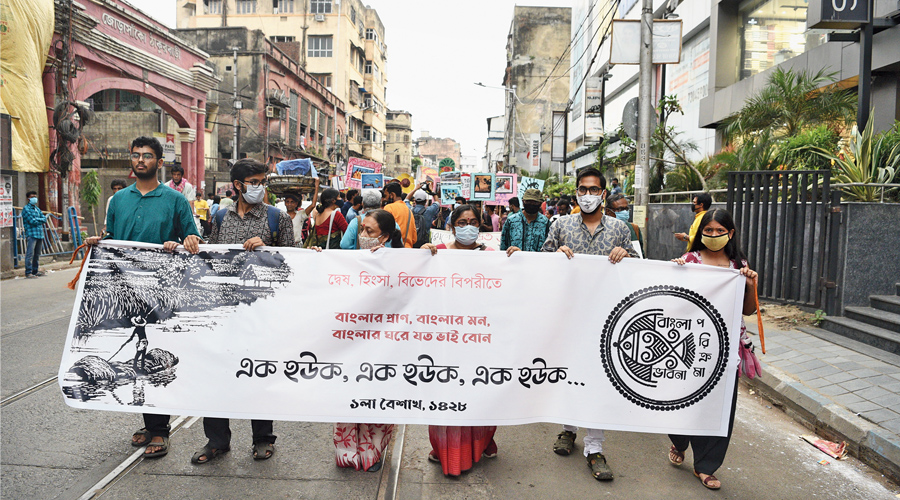 In Bengal, the word Ram first brings to one’s mind Rammohan and not Lord Ram. The “Ishwar” people of Bengal are familiar with is Ishwarchandra Vidyasagar. The Sonar Bangla that people in Bengal dream of is the Sonar Bangla that Rabindranath Tagore wrote about in the song that is now the national anthem of Bangladesh.

On the first day of Bengali New Year, scores of Calcuttans assembled outside Jorasanko Thakurbari, the birthplace of Rabindranath Tagore, to walk in a rally till College Street, known for its culture of debate, dissent and learning.

The choice of the start and end points was intentional, said organisers. It was meant to harp on what is at the core of Bengal’s society — a tradition of liberalism, acceptance of diversity and standing up against hatred.

Poushali Chakraborty, who finished her MSc in biotechnology from Jadavpur University this year, was among the participants. “I thought it was more important to join this rally than spend a holiday at home because the basic values of Bengal are under threat,” she said.

Poushali was also angry at the attempt to give the impression by a set of people that they were going to rescue Bengal.

“Some people are saying they will create a Sonar Bangla, as if there is nothing in Bengal and they will do everything for us. They sound like they are going to be the protectors of Bengali culture,” she said.

“One of their leaders said they will form anti-Romeo squads to protect women. This statement itself is an insult to the women’s struggle for years, an insult to all those women who fought hard and earned their own rights. Who are they to protect the women of Bengal?”

Anshumita Sengupta, an HR professional, had come from Nagerbazar in Dum Dum. “The day I heard about this rally, I decided to attend it. We the people of this state have to preserve our culture and fight to protect it. If we sit idly, we will lose our traditions and culture,” she said.

“The British had tried to cage Bengalis into a mould of clerks, but they failed. Just see the icons whose images we are carrying with us today. It is not possible to have everyone’s picture. But among the few we are carrying are scientists, writers, thinkers, feminists, social reformers, entrepreneurs and so many,” said an organiser.

“The new invaders are thinking that they will be able to build the narrative of Hindi-Hindu-Hindustan in Bengal. But Bengal is diverse. It has never accepted any domination. It will not accept this time, too.”

The rally went past a few places that have become iconic because of their association with people who represent the true spirit of Bengal. It crossed Swami Vivenkananda’s birth place and Vidyasagar College, which was founded by Ishwar Chandra Vidyasagar.

The participants were mostly in traditional Bengali attire. Organisers said Bengal’s culture did not mean Bengali culture. Bengal has always welcomed foreign cultures and traditions, and even imbibed some of them in Bengali traditions.

But the same people have always resisted anything imposed on them by force, or any domination from outside, they said.

“Look at our favourite foods, the most popular dresses. So many of these are taken from other cultures but have become a part of Bengal’s culture. Bengal as a place has always accepted people speaking various languages, belonging to different religions. That is Bengal and there is now an attempt to tamper with that tradition,” said Amlan Hazra, one of the organisers. “By Ram, we mean Rammohan. Our Iswar is Ishwar Chandra Vidyasagar.”

“Who knows if the BJP is elected to power they will say that singing Amar Sonar Bangla is anti-national, because it is the national anthem of a country that has a majority Muslim population. They will ban any performance of the song. This is a real threat. To stop that from happening we have to be united,” said a participant.