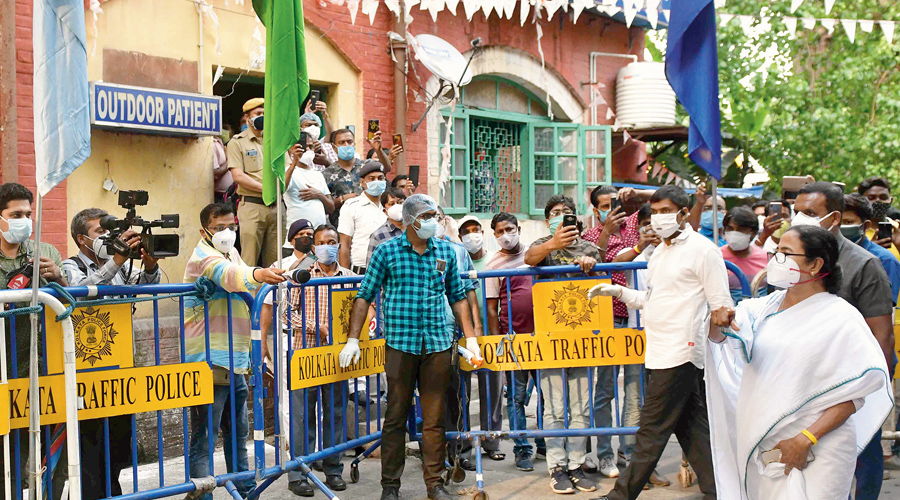 The Calcutta police hospital will soon be turned into a 300-bed Covid hospital in a tie-up with Medica Superspecialty Hospital, chief minister Mamata Banerjee has announced.

Mamata visited the hospital on Wednesday, soon after taking oath at the state’s chief minister, and announced that a Covid hospital will be set up in the Calcutta police hospital building as early as possible.

“We will have 300 beds for Covid treatment. This is a big hospital. Medica will do the set-up,” Mamata said, stepping out of the police hospital on Beninandan Street off Elgin Road in south Calcutta.

A few days ago, the Calcutta police hospital had started administering vaccines to police personnel and families of the police force.

Earlier, there were five Covid beds in the hospital exclusively for the treatment of police personnel, sources said.

Till now, over 4,000 police personnel in the city have been infected with the coronavirus, of whom close to 30 died.

With the new set-up, the hospital will be thrown open to the public.

Alok Roy, the chairman of Medica Superspecialty Hospital, said all 300 beds would be available to both police and non-police personnel.

“It would be run completely by Medica. There would be 50 oxygen-supported beds and a facility to treat moderate to serious patients,” Roy said.

Admission to the hospital will be done through Medica Superspecialty Hospital, like their private set-up, sources said.

The state government has offered several of its facilities in Calcutta to big private hospitals to set up Covid treatment centres.

Medica has set up a 200-bed Covid hospital at Kishore Bharati Stadium in Santoshpur under the same public-private-partnership model.