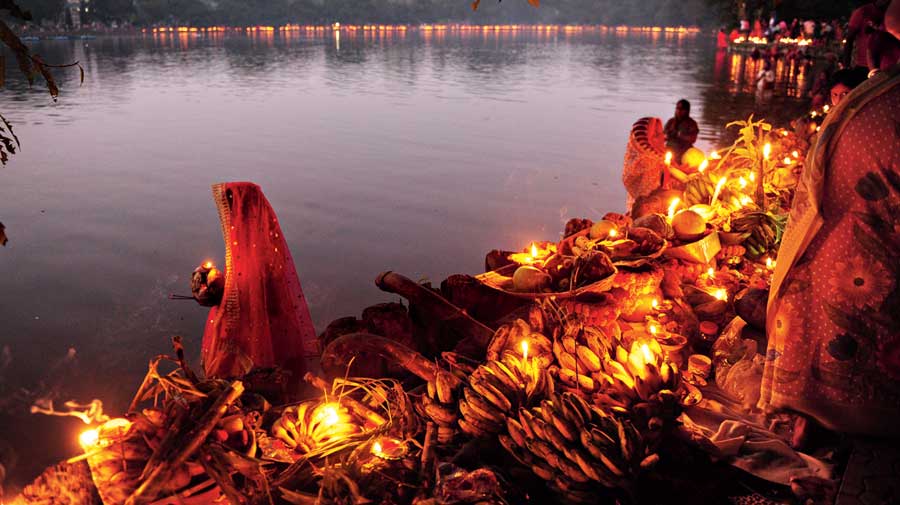 Two persons per family will be allowed to perform Chhath Puja rituals on November 20, the high court said on Tuesday.

The division bench of Justice Sanjib Banerjee and Justice Arijit Banerjee directed the Calcutta Municipal Corporation (CMC) and the Calcutta Metropolitan Development Authority (CMDA) to ensure elaborate publicity to inform Chhath worshippers about the cap in the city.

As for the rest of the state, the respective district authorities have to undertake the publicity drive.

The order said the vehicles that would ferry worshippers must not be covered. “Persons intending to travel to a water body should come in vehicles maintaining Covid protocol and without jostling with each other to get a toehold in the vehicle,” the order also said.

Wearing masks will be mandatory at all stages.

“Even when a vehicle… comes to a water body… all persons should not be permitted to alight or go to the water body,” the order said.

The bench was hearing a public interest litigation by Ajay Kumar Das seeking a court order on maintaining the pandemic protocols during the upcoming festivals.

In the previous hearing on November 5, the court had asked the Bengal government to “ensure that there is no use or display or bursting of firecrackers at all” during Kali Puja, Diwali, Chhath Puja, Jagaddhatri Puja and Guru Nanak’s birthday celebrations.

The two lakes still remain off limits for Chhath worshippers. The high court curbs are for festivities elsewhere.

At the November 5 hearing, when the high court was laying down the Diwali and Kali Puja norms, it did not take up Chhath because the matter was supposed to have been heard in the Supreme Court before Tuesday’s hearing. But the top court has yet to take up the matter.

The NGT order will stand for now, unless the Supreme Court decides otherwise, the division bench said on Tuesday.

More than 150 ghats in the city will be ready for Chhath Puja rituals on November 20, CMC and CMDA officials have said.

The bench said the government would have to strictly implement the November 5 directives banning the sale and use of firecrackers during the upcoming festivals.

The bench said it would make the director general of the state police and the Calcutta police commissioner responsible for any violation of the directives but relented after an assurance from the advocate general, Kishore Datta.

“Please keep trust in the state administration. The order of the court will be complied with. The state will take all measures to implement the order,” said Datta.

The bench asked both the top cops to file a compliance report a week after the reopening of the court after the Puja vacation. The vacation ends on November 17.

A senior official of the state administration said the government had already started working on implementing the court’s directives.

Advocate-general Datta told Metro: “Please keep faith in the state administration. The state will take all necessary measures to implement the order. Just like for Durga Puja.”

The high court said the “state should consider whether it may be in the best interest of all to suspend the operation of local trains on November 14 and November 15 and on the day of Jagaddhatri Puja or to manage the running of trains in such manner that people do not find it convenient to come to the city… or travel to other places of interest.”

The state is “left free to make appropriate arrangements with the railways”.