Some of the aircraft parking bays were flooded, forcing passengers getting off planes to wade through water to board buses on their way to the terminal 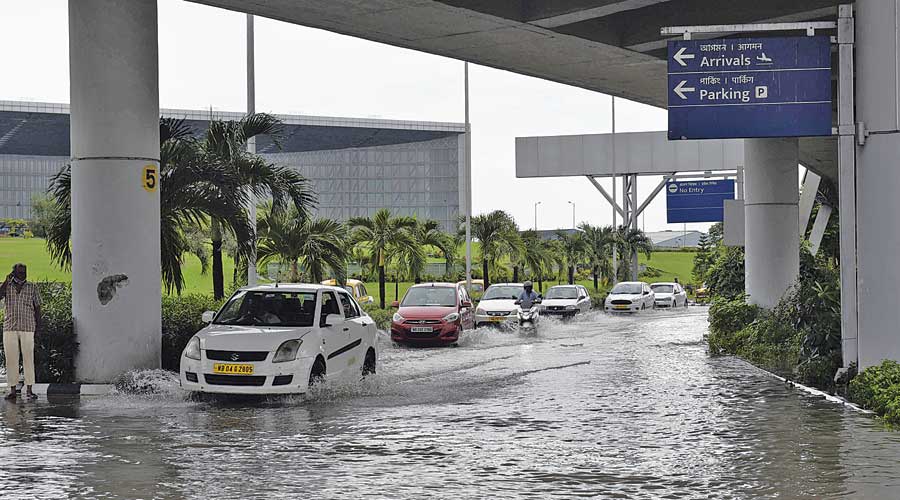 The city airport went under water for hours after a spell of heavy rain on Friday morning.

Some of the aircraft parking bays were flooded, forcing passengers getting off planes to wade through water to board buses on their way to the terminal, airport officials said.

Toilets in the arrival area of the terminal could not be used because of backflow of water. Outside, too, the approach road to the terminal was flooded, causing traffic snarls.

An official who has been working at the airport for many years said the facility was no stranger to waterlogging during the monsoon or after a spell of heavy rain but the situation had rarely been so bad.

Water finally receded in the afternoon.

“Passengers of aircraft which were parked near the terminal building had no problem in boarding or getting off as they could access aerobridges. But those who had to take a coach to reach the terminal or the aircraft had to wade through water,” said an official of an airline.

A flooded aircraft parking bay at the airport
Airport sources

A south Calcutta resident who had gone to the airport to receive a relative said the parking booth was flooded. “There was a long queue as vehicles were moving slowly. Many arrival passengers were inconvenienced because they could not use the washrooms.”

Airport officials blamed Metro construction and lack of proper pumping system of municipalities surrounding the airport for the waterlogging.

“We have asked the Metro authorities to install more pumps. They should pump the water out of the airport premises,” said airport director C. Pattabhi.

A Metro official said no drains were blocked because of Metro work. "We have

diverted all utilities. The airport authorities would not have handed us the site had we not done so,” the official said.

An official of Dum Dum Municipality, which is in charge of areas around the airport, said they were aware that rainwater was accumulating in the airport compound as well as the roads leading to it.

“We tried to pump out some of the water that had accumulated on the road leading to the airport from gate 2.5 (on Jessore Road) but could do little as VIP Road was getting flooded,” the official said.

Another official said: “We could not do much because the drains around the airport had got clogged by construction materials that accumu-lated because of the Metro work.”

Harinder Singh, the chairperson of Dum Dum Municipality's board of administrators, said they were not responsible for maintenance of the airport premises.

“We tried to drain out as much water as we could from Jessore Road, which leads to the airport. There was not much water there. We know there was water inside the airport but that is not under our jurisdiction. It is maintained by the Airports Authority of India (AAI),” said Singh.

Traffic headed to the airport through VIP Road in the morning was badly hit because the Haldiram’s and Chinar Park crossings were under knee-deep water.