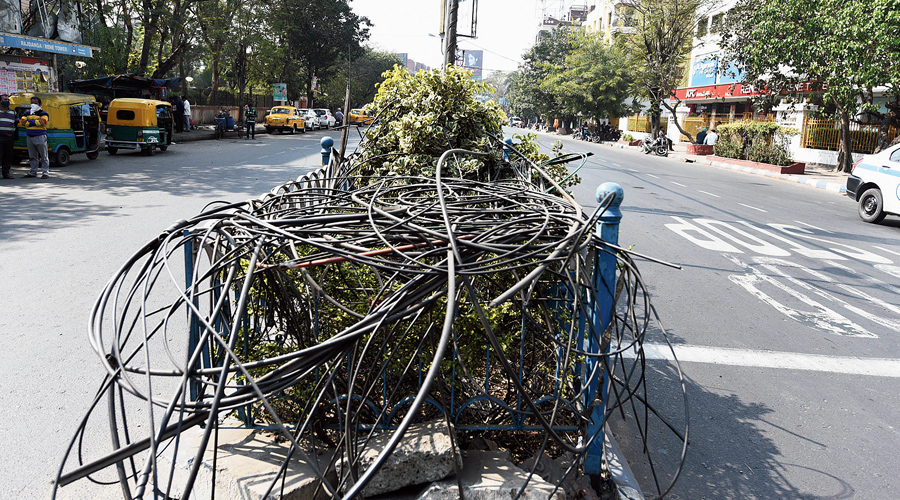 A drive to remove defunct overhead cables between the Ruby crossing and Gariahat has shifted the mess to the ground. The snipped cables are now blocking pavements and hanging dangerously on roadside railings and median dividers.

An association of cable TV operators and broadband service providers has been clearing the jungle of overhead cables by removing the ones not in use. The work began about a month back and has covered over 3.5km. Nearly 300km of dead cables have been removed from the stretch, a cable operator said.

The new problem that has emerged is that some of the cables have not been removed from the pavements and median dividers where they were kept after being snipped.

The Telegraph saw bundles of cables on median dividers for nearly a kilometre, both to the east and west of Acropolis Mall. Some of the cables have also started spilling on the roads.

At the Siemens crossing, more than 10 cables were lying on the pavement on the southern side. In the same place, the lid of an underground drain is missing. The two problems together force pedestrians to walk on the road instead of the footpath. 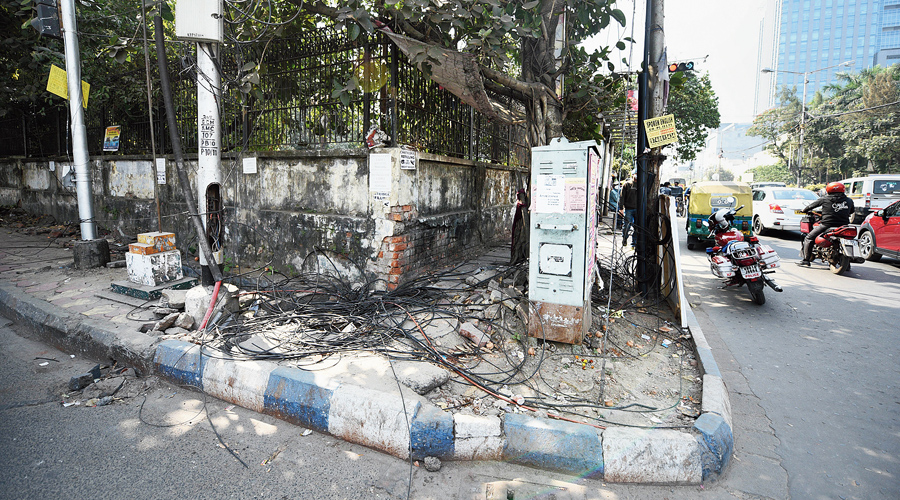 An autorickshaw driver said the cables had been lying there for days.

“We are forced to walk on the road though it is a busy crossing and vehicles come from all sides. The footpath is blocked by cables near the crossing. A little away from the footpath, the lid over the drain is missing. Where do we walk?” asked a pedestrian.

On the Ballygunge bridge, the workers removing the cables put the bundles on the pavement or tied them to the iron railings. But many of the cables had fallen on the carriageway or were hanging dangerously from the railings.

“The way these cables are hanging, they can get entangled with the wheels of a two-wheeler, a car or a bus and lead to an accident,” said a motorcyclist.

A senior CMC official said the civic body had removed a bulk of the cables. “We have removed the snipped cables from the stretch. There could be some places where cables are still lying. We will remove them soon,” said the official.

Tapash Das, the joint convener of the All Bengal Cable Television and Broadband Operators United Forum, said a bulk of the cables had been removed. “We had kept the cables on the footpath and they were removed by the CMC. Only in a few locations they are yet to be removed,” he said.

Das said several cable operators met Firhad Hakim, the chairperson of the CMC’s board of administrators, on December 21. Hakim asked them to remove the dead cables from the stretch between Ruby and Gariahat as a pilot project.

The CMC is providing logistics to the cable operators who have deployed their staff to remove the wires. A senior engineer of the CMC’s electricity department said they had given two hydraulic ladders for the workers to reach the point where the cables are tied to a pole and snip the defunct ones.