The findings of a preliminary investigation by automobile experts suggest a puncture in a front tyre led to the 8.30am accident 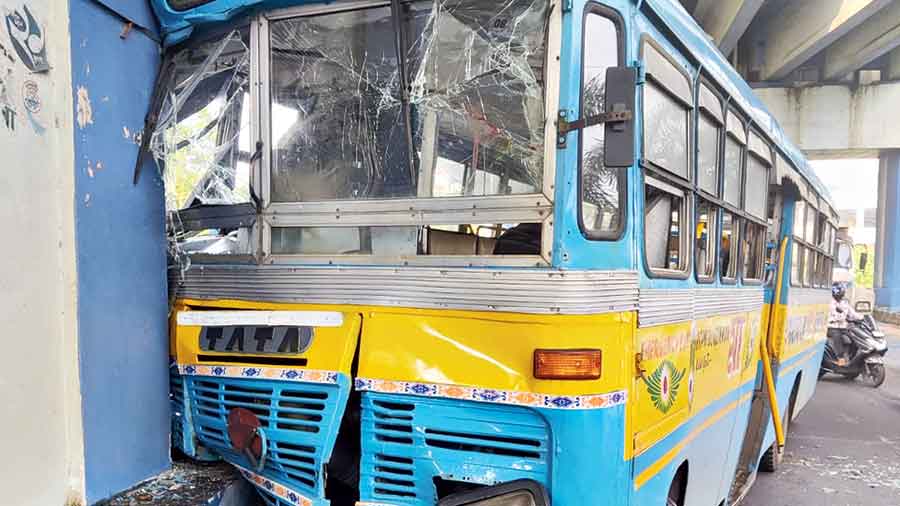 At least 12 passengers were injured after a bus crashed into a pillar of the Parama flyover minutes before it was to take a left turn at the Science City crossing on EM Bypass on Wednesday morning.

The findings of a preliminary investigation by automobile experts suggest a puncture in a front tyre led to the 8.30am accident, police said.

“One of the front tyres of the bus got punctured, after which the vehicle seems to have lost balance. It then crashed into one of the pillars of the flyover,” said an officer of the traffic department.

The injured passengers were taken to the Calcutta National Medical College and Hospital, from where they were discharged after treatment.

The accident has once again turned the focus on the menace of speeding in Calcutta.

An officer of Pragati Maidan police station said that from the way the bus had rammed into the pillar it was apparent that it was moving at a high speed. The driver apparently found it difficult to control the vehicle because of the flat.

“The accident could have been averted had the bus been moving at a slower pace,” the officer said.

The bus on route KB-21, which plies between Ganganagar in North 24-Parganas and Bantala, was heading towards EM Bypass from Park Circus when the accident happened.

A case of rash and negligent driving under Section 279 of the Indian Penal Code has been registered against the driver.

The bus has been seized but the driver fled the spot.

According to statistics, buses — run by the government or privately owned — are one of the major contributors of road accidents in the city.

The tendency to pick up and drop passengers in the middle of the road, reckless driving and the tendency to race with buses on the same route are some of the major causes of accidents in the city, the police said.

Often, passengers are injured as buses start moving while they are getting on or off.