There is no guideline yet from the Centre about preparing the list of prospective recipients who do not belong to either category, says official 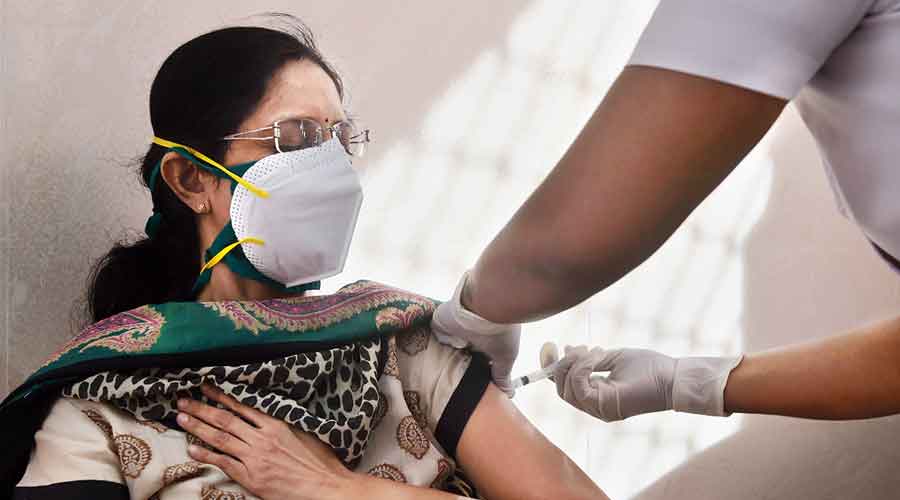 Some Calcutta Municipal Corporation clinics have kept a book where people above 50 can “register” their names for receiving Covid-19 vaccine doses, though there is no clarity whether such “registration” will be considered valid when inoculation of the general population starts.

Also, there is no clarity yet when vaccination of the general population against Covid-19 will begin. Currently, health and frontline workers are being administered doses.

An official of the state health department said they had not asked the CMC to register the names of citizens who are neither healthcare workers nor frontline workers. “There is no guideline yet from the Centre about preparing the list of prospective recipients who do not belong to either category. The CMC is doing it on its own,” said the official.

There has been no public campaign by the civic body to inform people that such a registration is under way. In some places, councillors have sent WhatsApp messages to select people, many of whom have queued up and enrolled their names hoping that it would make them eligible for a Covid vaccine.

The ones who have registered their names have not been given any receipt. Nor have they got any text message from the civic body confirming the registration.

The exercise, purportedly to help people, has triggered confusion among many, especially the elderly. Many elderly, who had rarely stepped out since the pandemic started, have visited clinics and stood in queues to enrol their names so that they do not miss out on vaccination. It also shows how desperate a section of the population is to get vaccinated against Covid.

CMC sources said they knew of two wards where the registration was being done actively — Ward 82 in Chetla, where outgoing mayor Firhad Hakim is the ward coordinator, and Ward 68 in Ballygunge.

In Hakim’s ward, more than 1,300 people have registered their names, a CMC official said. Long queues are forming in front of the ward health clinic on most days for registration.

Hakim told The Telegraph the CMC was keeping the names to ensure there was no delay when inoculation of the general population against Covid starts.

“If the state government tells us they are going to start the inoculation of the general public, we can start with these names. People are voluntarily registering their names. It can be expected that they will not shy away from taking vaccines and we will not lose any day in vaccinating common people,” said Hakim.

He added there was no guarantee that the people who had enrolled their names at civic clinics would be given priority over others.

“Others too can come and get doses when we will start administering vaccines to the general public. It is not that those who are registering their names now will be given priority,” Hakim said.

Sudarshana Mukherjee, the coordinator of Ward 68, said she had started registering names as she had been flooded with enquiries from senior citizens about the likely inoculation schedule of the general public.

“I am keeping the names of senior citizens ready. I do not know if these names will be considered when the general public will be vaccinated. If each ward is asked to send names of people above 50, I can send these names,” Mukherjee said.

The Covid-19 Vaccine Operational Guidelines, issued by the Centre, mentions that “the latest electoral roll for Lok Sabha and Legislative Assembly election will be used to identify population aged 50 years or more”.

The guidelines also state that the administration of Covid-19 vaccines will be prioritised among three groups. Health-care workers and frontline workers comprise the first two groups and their vaccination is under way.

People above 50 and those below 50 but suffering from comorbidities form the third group.

The vaccination of people over 50 will begin after March 6, the Centre signalled on Tuesday.

A resident of Ballygunge said he received a WhatsApp message from a neighbour mentioning that persons registering their names must provide their PAN or Aadhaar number. “My wife went to the CMC health clinic and registered her name,” said the resident.

Among the Calcuttans who have received similar WhatsApp messages, many are averse to taking the risk of standing in a queue during the pandemic to get their names registered. They wondered why CMC officials are not visiting houses and registering names.

“The government has all details about citizens. There is a voters’ list, people have Aadhaar cards and PAN cards. It will not be difficult for the government to find out who are the people above 50,” said a man who has crossed 60.

CMC doctors said they had not received any order from the civic authorities or the state health department about registration of names. They said they were not sure how the registration being done at CMC clinics would be of any help when inoculation of the general public would begin.

“We have only been told by our seniors that the chairperson of the board of admi-nistrators of the CMC (Firhad Hakim) has instructed that ward health clinics start registering names of people above 50,” said an official of CMC’s health department, which runs the ward health clinics.