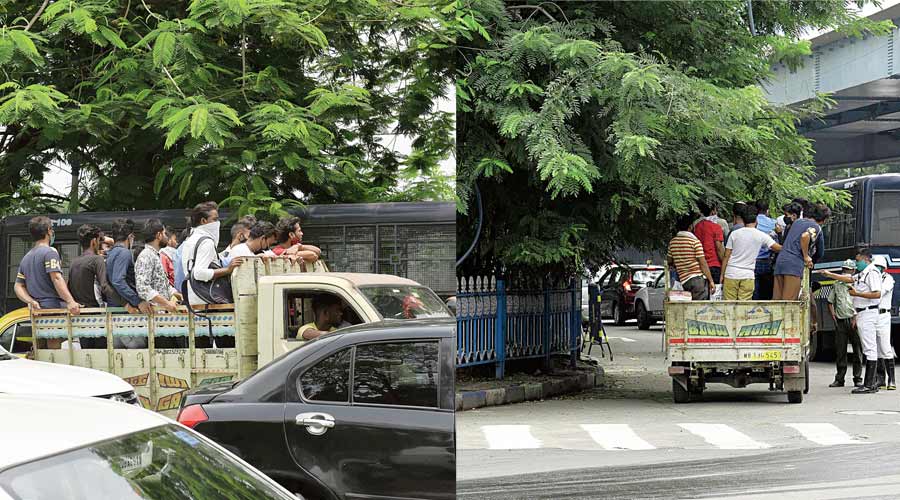 A pick-up van packed with people had stopped at the traffic signal on Outram Road, at its intersection with Chowringhee Road, around 11am on Wednesday. The moment the signal turned green and the vehicle turned left, two traffic policemen came running and signalled the driver to stop. The vehicle was ferrying people headed for work towards Esplanade. The cops told the passengers off for travelling in an “unauthorised” vehicle. “Please find another way to go to work,” one of the cops told them. In the absence of public transport, many commuters hop on any vehicle they come across after paying a “fare” to the driver. On Wednesday, these people were forced to walk the last stretch in the absence of an alternative.
Pictures by Bishwarup Dutta
Debraj Mitra   |   Calcutta   |   Published 24.06.21, 02:12 AM

Close to 1,000 people, most of them daily commuters in the Sealdah South suburban section, squatted on railway tracks and platforms at Sonarpur for over four hours on Wednesday morning.

They had two demands — resumption of local trains as early as possible and they be allowed to board the staff special trains till the services resume.

The suburban railway services have been suspended since May 6 to check the second wave of Covid-19. The special trains are meant for railway staff and other essential service providers designated by the state government.

A city doctor said the resumption of local trains risked an increase in the number of cases, especially since many passengers from suburbs were still not vaccinated. “If possible, the full fleet should be run to avoid overcrowding to the extent possible,” said the doctor.

Wednesday morning’s protest was not an isolated one, said railway officials. The special trains are running packed and Railway Protection Force personnel are having a tough time keeping “unauthorised passengers” off them, they said.

“Unauthorised passengers” refer to the large number of people who used to come from southern and northern suburbs on local trains every day to the city to work as masons, plumbers, vegetable sellers, daily wage earners, domestic help and hawkers.

The agitation started around 7.30am at Sonarpur station on Wednesday. A Sealdah-bound special train from Canning was stuck for hours as were several other special trains at stations like Diamond Harbour and Baruipur.

The blockade was lifted a little before noon after the RPF and GRP personnel persuaded the protesters to submit their demands in writing so that they could be forwarded to the respective authorities in the railways and the state government.

“I would have joined the agitation if I was there,” said Bina Dhara, a resident of Khurigachhi, around 6km from Sonarpur station. Dhara, who worked as a domestic help in four houses at Jodhpur Park, used to travel to Dhakuria from Sonarpur.

She lost all four jobs after the train services were suspended. A mother of a teenage girl, Dhara now works at a couple of homes in Sonarpur town.

“I used to earn Rs 9,500 in Calcutta. Here, I get only Rs 4,500. My husband is ailing and he does not earn anything. Our livelihood is dependent on local trains,” said Dhara.

Before the pandemic, the Howrah and Sealdah divisions, which saw around 400 and 900 daily local trains, respectively, accounted for a passenger volume of close to 30 lakh daily.

Now, around 80 and 250 special trains run every day in the Howrah and Sealdah suburban sections, respectively, said officials.

The Sealdah South suburban section has been witnessing the maximum number of skirmishes between people demanding to get on special trains and men in uniform stopping them.

“Stations like Diamond Harbour, Canning, Baruipur and Sonarpur used to have thousands of daily passengers to Sealdah. These are the places where there is the maximum rush to get on a train,” said an RPF officer in the Sealdah section.“We are allowing only people with monthly passes issued by the state government. Stopped from boarding the trains, there is a common refrain — please provide us with livelihood opportunities then. We don’t know what to say,” said the officer.

An official in the Howrah division said the situation was similar on the Howrah-Burdwan and Howrah-Bandel stretches.

Prakash Dey, a Bandel resident who works at a pharmacy on Brabourne Road, has got a pass that allows him to board a train to Howrah every day.  “It is saddening to see people like me not being allowed on trains. They are trying hard to earn a livelihood,” he said.

An official in the Bengal administration said “overcrowded local trains were fertile grounds for a surge in Covid cases”.

“We had stopped the trains to check the spread of the virus. Now that the numbers have come down, we will review the situation and take a call on the next step,” he said.