For the past two months, the crew has been trying out one of the most artistic forms of textile printing 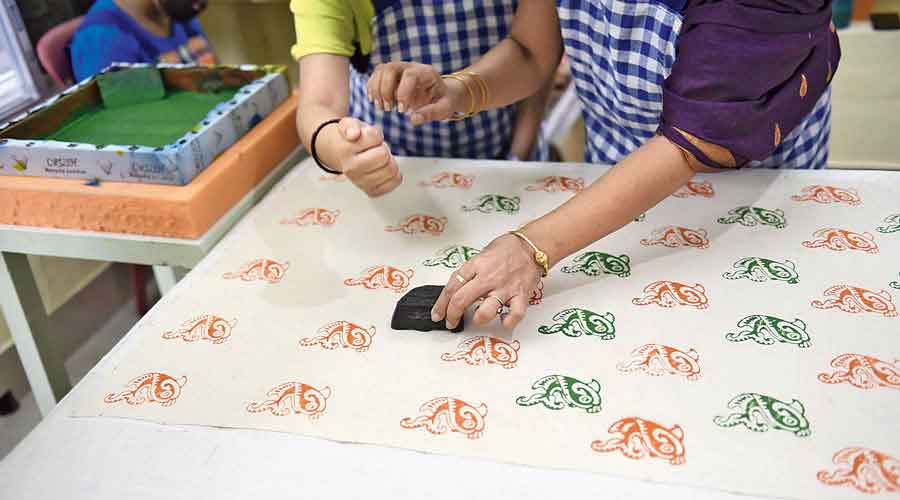 On the ground floor of a house on the southern fringes of Calcutta, a group of people has been making tote bags, doormats and cushion covers for sale for the past four months.

Women from economically impoverished families, trained in stitching fabric, are part of the production unit. As are some people with intellectual disabilities like autism and Down syndrome, for whom the unit is a renewed shot at mainstream life.

Many people with cognitive impairments had been part of some skill training or other as part of their rehabilitation efforts. But the pandemic abruptly halted everything and confined them inside their homes once again. Teaching them social integration took years, said trainers and parents. Just when they made some progress, the pandemic forced social distancing on them.

Since a March launch, the unit, called The Charkha, has been making over 500 bags every month. The buyers include a handful of boutiques. E-commerce sites also account for a significant section of the unit’s sales volume. 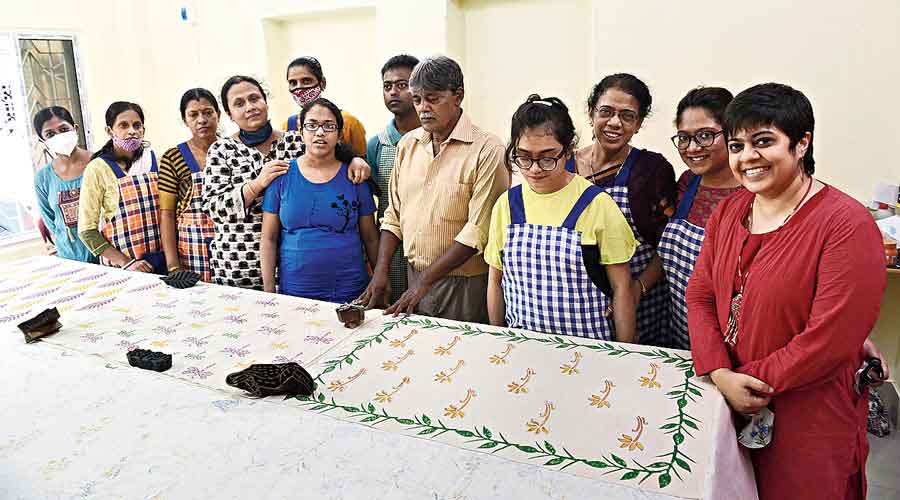 The team during a block printing session at the Thakurpukur unit.
Bishwarup Dutta

For the past two months, the crew has been trying out one of the most artistic forms of textile printing. A pattern carved out of a wooden block, lends the name of the form — block printing.

The block is then covered with dye and pressed firmly onto a fabric before being struck firmly so that it leaves an imprint on the cloth. The distressed look created by block printing is hard to replicate with a machine.

“We have been producing over 300m of block-printed fabric every month, in addition to a wide range of bags, doormats, cushion covers and other home décor stuff. We have barely started but so far, the response of buyers has been encouraging,” said Amrita Roy Chowdhury, the founder of Transcendent Knowledge Society.

Her NGO, which is behind The Charkha project, works for economic and social rehabilitation of differently abled people.

The production unit operates out of the ground-floor of a two-storey house, a five-minute walk from the 3A Bus Stand in Thakurpukur on Diamond Harbour Road.

One of the participants at the unit is Aishika Banik, 15, who suffers from autism as well as visual impairment. She is a student of a school run by the Transcendent Knowledge Society in the Karunamoyee area of Tollygunge.

Before the pandemic, she had a fixed routine and seemed to enjoy it. She went to the school and interacted with other students. She was being trained in vegetable printing at the school.

But the Covid-19 curbs changed everything.

“Her sleep pattern has changed. She refuses to leave bed before noon. Earlier, she had an incentive to leave the bed — to go to school or some other learning session. But if I try to wake her up in the morning now, she says there is nothing to do after getting up,” said Srabani, her mother.

Shivangini Santra, 25, who also suffers from cognitive impairments, has learnt stitching for two years before being a part of The Charkha. “She was missing out big time on being part of a team because of the pandemic. She loves being engaged,” said her elder sister Shivoli, who is also associated with the project along with her mother, Aditi. The unit runs from the ground floor of the Santra home.

On July 28, when this newspaper visited the unit, Shivangini and Aishika were pressing a wooden block against a fabric. They were helped by other women in the group.

“People with intellectual disabilities are good at repetitive work. The use of colours has a therapeutic effect on them,” said Roy Chowdhury.

A cafe on Lake Road run by young people with intellectual disabilities was forced to shut down last year because of the pandemic. Roy Chowdhury plans to include some people who worked there in The Charkha.

“We will also bring in some acid attack survivors and transgenders in the near future,” she said.

The NGO has hired professionals for training the group. “Block printing is a dying art. If the art helps in improving the lives of these people and they help in keeping the form alive, it is a win-win situation,” said Muhammad Rafiq, the chief trainer.