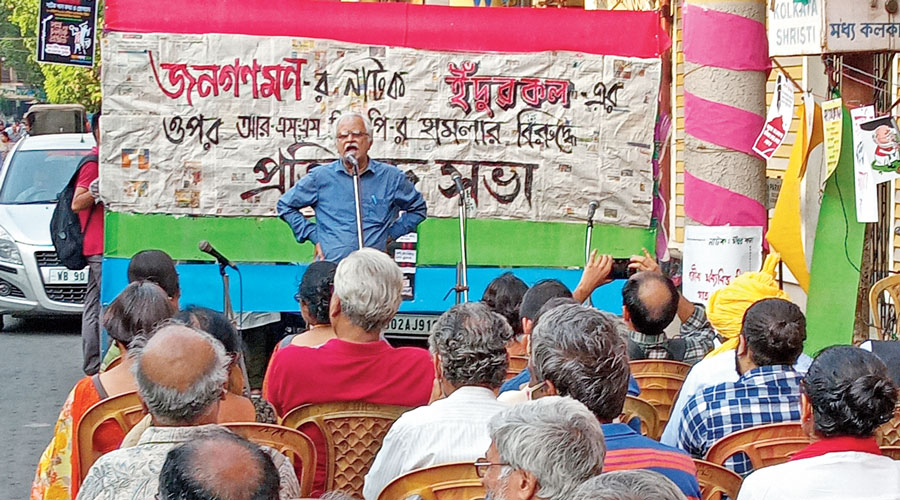 Parties in power have often resorted to culture policing in Bengal but the BJP could be far more dangerous given the evidence they have presented when they are still in the opposition, an activist said at a demonstration in the College Street area on Tuesday.

A play about the “dangers of fascism” was stopped midway, allegedly by BJP supporters, at Basanti in South 24-Parganas on March 27. The members of the group staging the play, who were allegedly attacked, had organised a protest meet in the College Street area on Tuesday.

“In the past, both CPM and Trinamul as ruling parties have resorted to culture censorship,” said Kushal Debnath, the convener of the “No Vote to BJP” campaign, one of the guest speakers at the meeting. “The BJP trying such strongarm tactics before coming to power is a sign of naked fascist aggression.”

A ruling party trying to muzzle free voice and a party in the opposition, with three MLAs in the 294-member Assembly, daring to do it are different, said several speakers on Tuesday.

“These people want to compartmentalise everything. They think ‘we are politicians, we will run the country’. You are the culture clan. Your job is to sing and dance. Don’t get involved in matters of the country,” said Soumitra Basu, a former professor of philosophy at Jadavpur University.

The same mentality was behind the saffron ecosystem’s attack on Nobel laureate Amartya Sen for his unfavourable comments on the Narendra Modi regime, said Basu.

Subhankar Das Sharma of Janaganamana, the cultural organisation which was allegedly attacked at Basanti, said the group had staged over 80 shows of the play across south Bengal since August last year. Written against the backdrop of the Modi government’s citizenship matrix, the play is titled Idurkol (Mouse Trap).

The play begins with the following lines that translate to: “They are fooling people, training us to live alone, stoking riots between communities, jailing the protesters.”

Many young people have come up with songs protesting the BJP regime’s majoritarian politics in general and the citizenship matrix in particular. Many of them have been brutally trolled and threatened, at times by prominent leaders of the BJP.

Bengal is not unfamiliar with culture censorship. During the Left regime, plays like Poshu Khamar (based on George Orwell’s Animal Farm) and Winkle Twinkle had allegedly been stopped from being staged.

Multiple speakers said on Tuesday that Trinamul hoodlums had also stopped musical performances that were part of political campaigns in districts as recently as 2018.

To resist the attack on free speech is to take the message to the interiors of Bengal, said Debasish Majumdar, who runs a theatre group. “We have to take the plays beyond the Academy (of Fine Arts), to villages,” said Majumdar.

Tuesday’s stage was set up near the Paramount sherbet shop. Lines of bookstores dot the busy road. Young participants sat on the pavement and seniors on chairs in front of the dais.

A group of musicians recited poetry and sang songs of protest between speeches.

The talking point at the farmers’ demonstrations on Delhi borders is the Bengal polls, a protester from Tikri, a protest site on the border of the national capital, said on Tuesday. 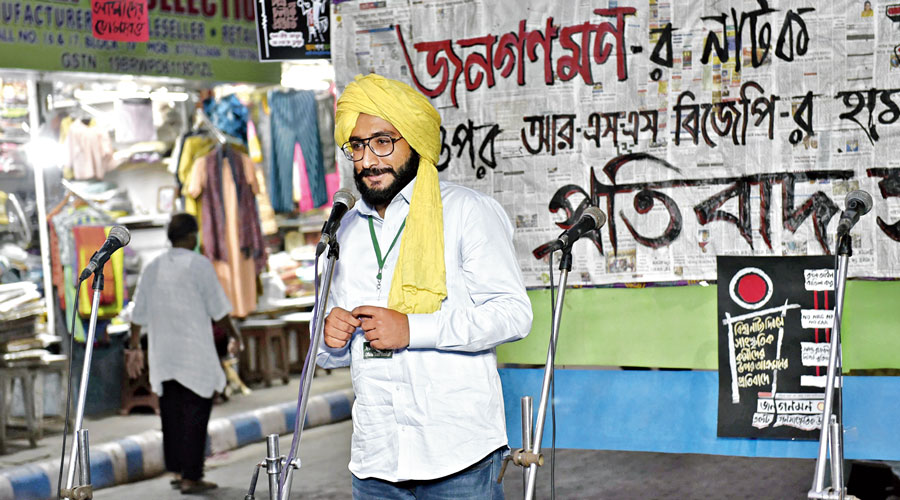 Anup Singh of the Kisan Social Army speaks at the programme on Tuesday.
Bishwarup Dutta

“The people at Tikri and Singhu are watching news channels. Whenever a pro-BJP channel speaks in favour of the BJP, they switch off the TV,” said Anup Singh of the Kisan Social Army, which handles the social media operations of the Sanyukta Kisan Morcha.

A six-member delegation, including Singh, is in Calcutta to lend support to the “No Vote to BJP” campaign. “The land of Bhagat Singh is pinning hopes on the land of Bose. A BJP defeat will be a big shot in the arm for us,” said Singh.