She spoke about the Hathras horror — gang rape, murder of Dalit teen, alleged bid to protect the accused, attempt to silence the victim’s family and burning of her body without the family’s consent 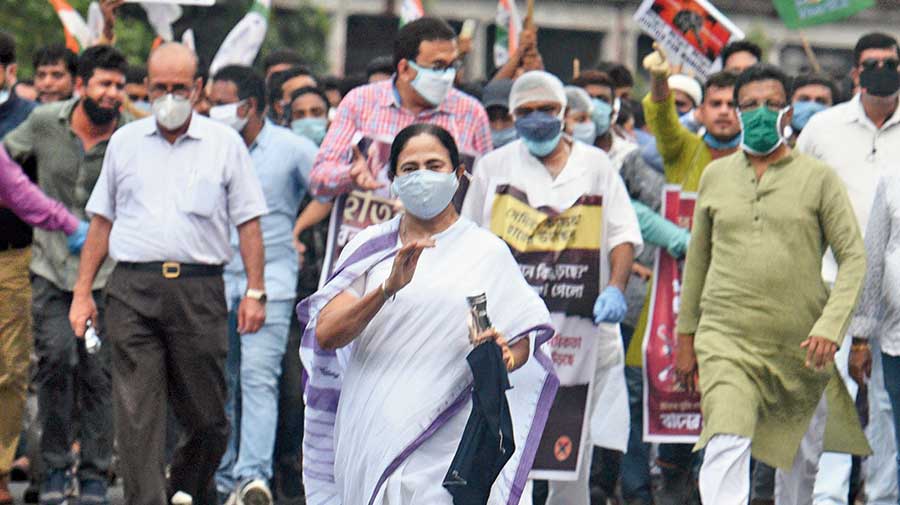 Mamata Banerjee leads the march in Calcutta on Saturday to protest the atrocity on the Dalit girl in Hathras in Uttar Pradesh.
Pradip Sanyal
Devadeep Purohit   |   Calcutta   |   Published 04.10.20, 01:55 AM

Mamata Banerjee on Saturday identified the BJP as “the biggest pandemic” that had “finished the country”, leading a protest in the city against the Hathras horror and broadening the scope of her attack by referring to a plethora of other problems such as the migrant crisis, economic doom, “throttling of democracy” and the hounding of Dalits and minorities.

During her 30-minute address to the gathering at the base of the Gandhi statue after completing a 2.5km protest march from Birla Planetarium, the Bengal chief minister spoke at length about the Hathras atrocities — the gang rape and murder of the Dalit teen, the alleged bid to protect the accused, the attempts to silence the victim’s family and the burning of her body without her family’s consent.

“The BJP is the biggest pandemic; they have finished the country,” Mamata said, also referring to the farm laws that the Centre had steamrolled through despite protests by farmers and the Opposition, and the disinvestment of public sector units.

This was the first time the Trinamul Congress chief had hit the streets after the Covid-19 restrictions came into force on March 25.

Through her political career, Mamata has successfully laced long walks with her politics of protest, with most of these marches having either started or ended at the Gandhi statue on the Maidan or at the Gandhi Bhavan in Beleghata.

Speaking from a small dais erected next to the statue on Saturday, the chief minister said: “I felt like running to UP. My heart today is in Hathras. I had sent my representatives to Hathras yesterday (Friday), but they were stopped 1km from the village. No courtesy was extended to them, and women members of the delegation were assaulted.”

She added: “They used the police to prevent us from meeting the victim’s family.… They may be successful tomorrow or the day after, but we will surely get the chance one day. And don’t forget, the Dailt girl is our daughter.”

Mamata said she could not speak to the victim’s family as their phones had been taken away by the Uttar Pradesh administration.

“That’s why I have come here…. We come to this place for celebrations or for protests,” she said, explaining her choice of venue a day after the 151st birth anniversary of the Father of the Nation.

Mamata repeatedly stressed that she had been forced to organise the protest despite the pandemic because of the Hathras tragedy, which she said had exposed the atrocities the BJP had been inflicting on people, especially Dalits and minorities.

“Has anyone got justice?” Mamata asked, referring to the Delhi riots, the encounter killings in Uttar Pradesh and the attacks on minorities in various BJP-ruled states.

“This is a phase of darkness in the country, but we will come out of it and that’s why we all have torches in our hands,” she added as all the participants flashed lights.

“When elections come, Pakistan comes, Pulwama happens or war-mongering starts. After election, they start selling — rail, coal, BSNL or whatever they can,” Mamata said.

Although the central theme of the protest was the Hathras monstrosity, Mamata broadened the programme’s ambit to address concerns over the Centre’s policies that were “spelling doom” for the poor and the deprived sections.

The pandemic-induced lockdown, its impact on migrant labourers and the economy at large and the BJP-led government’s failure to resuscitate the economy also featured in her speech.

“We were lectured about what to do over Covid…. But what are they doing? So many people lost their jobs; migrant workers, small-scale industries are crying. They did nothing,” Mamata said.

She flagged the “throttling of democracy” under BJP rule and accused the Centre of trying to terrorise media organisations. “This is not the government of the people, for the people, by the people…. This is a government of dictatorship,” Mamata said.

The Trinamul chief willy-nilly admitted that the Opposition parties remained fragmented and that the saffron camp was very much in control across the country, but ended her address on an optimistic note. “It is becoming like one nation, one political party. We are moving towards a presidential form of governance…. Opposition parties are not allowed to speak,” she said.

“We will keep fighting and we will win. We will show that the BJP is not the future of this country, it’s temporary,” Mamata added.

As Bengal gears up for elections in seven months, Trinamul sources said Mamata would try to energise her campaign by taking advantage of the “anti-BJP mood” in the aftermath of what had happened in Hathras.

“The incident has triggered an anti-BJP mood, which Didi is using to launch a multi-pronged attack on the BJP…. This will help us build campaign momentum for the Bengal polls,” said a source close to Mamata.

The chief minister has instructed Trinamul workers to hold protests by involving Dalits, minorities, Scheduled Castes and Scheduled Tribes in all 341 blocks of Bengal till October 17.

That Mamata had set her sights on the poll narrative became clear when she chose to respond to the BJP’s allegation that she practised the “politics of minority appeasement”.

The fault dear Brutus is in our cars: Kailash Vijayvargiya on Yogi Adityanath's Uttar Pradesh and the Hathras rape case