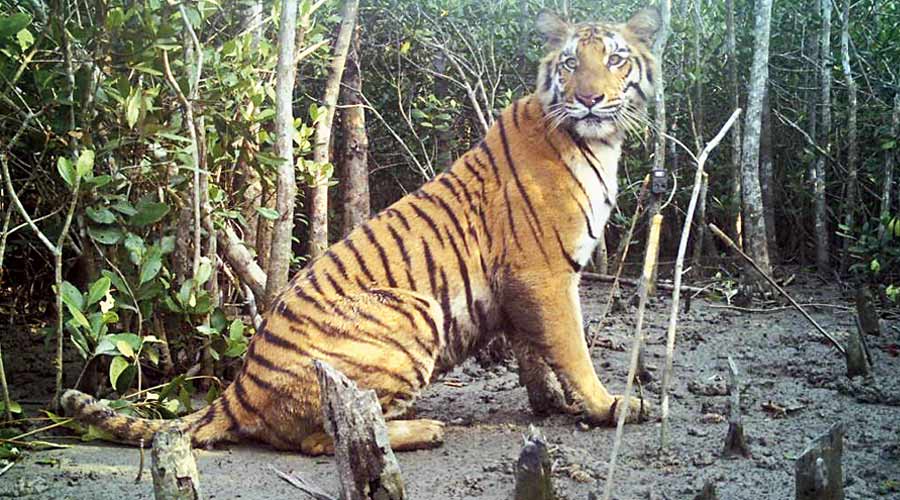 Two cyclones in successive years have failed to dislodge the Bengal tiger from its terrain, suggests a study.

Experts pointed out that the numbers in the study are a proof of the famed adaptability of the Bengal tiger, which counts as home the Sunderbans, one of the most difficult terrains on the planet.

The 2020-21 census shared by the Bengal administration on Wednesday, on the eve of the International Tiger Day, counted at least 96 tigers in the Indian territory of the Sunderbans. The 2019-20 census had also counted as many big cats in the Indian terrain of the mangrove delta.

The state conducts a tiger census every year. The national census happens once every four years.

While forest officials welcomed what they called a “stable population despite natural odds”, some of them warned that the increase in human dependence on forests because of the pandemic was a threat to a thriving tiger population.

“Cyclone Amphan had left an unparalleled trail of destruction in 2020. This year, Cyclone Yaas triggered massive inundation of low-lying areas. But the tiger count has not gone down. This is a testament to the adaptability of the Sunderbans tiger,” said V.K. Yadav, the chief wildlife warden of Bengal.

Image of tiger captured by hidden cameras in the Sunderbans.

The Sunderbans tigers are extremely tough because they have to survive in the inhospitable terrain. In the past two years, one tiger had to be captured from a fringe village because it was straying into human habitat. At least two tigers have died because of “natural causes”, according to the forest department.

The latest number excluded cubs under the age of one year.

“The Sunderbans tigers are among the toughest and most adaptable predators on the planet. They might have moved to relatively higher land during or before the storm or figured another way to survive. They can sense natural calamities,” said Tapas Das, the field director of the Sunderbans Tiger Reserve.

The tigers also survived a depletion in their prey base because the two cyclones are believed to have killed many herbivore animals, said another official.

The latest census found 74 tigers in the STR area and 22 in the South 24-Parganas region.

A total of 1,307 camera trap units were installed at 726 locations for the census, said an official.

The 2018 tiger census had pegged the number of big cats in the Sunderbans at 88, a dozen more than the findings of the last national count in 2014.

A section of forest officials and wildlife activists pointed out that while it was a relief that the tiger population was stable, the picture was far from rosy.

“More and more people in the Sunderbans are turning to the forests for livelihood because the pandemic has robbed them of their income. The people are illegally entering the forest creeks to catch crabs and fish, risking their lives. The intrusion has led to a spurt in human-wildlife conflict,” said a wildlife activist.

Over 25 people have died in tiger attacks since March 2020, according to the forest department.

“Tigers are extremely secretive animals. They avoid breeding if they sense human presence in their habitat. If the instances of people entering the forests do not come down, it will be detrimental for the breeding of tigers,” said a veteran forest official.