Religious leaders come together to celebrate host of of festivals

Taking part in one another’s celebrations is the true culture of Bengal and must be preserved, say organisers 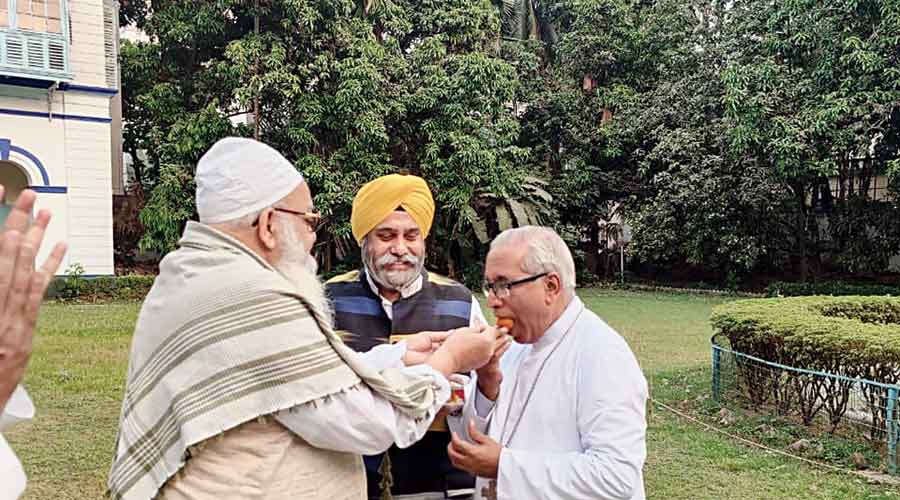 Maulana Qari Fazlur Rahman (left) and Archbishop of Calcutta Reverend Thomas D’Souza (right) offer sweets to each other as Satnam Singh Ahluwalia, the general secretary of Gurdwara Behala, looks on at the interfaith meet on Sunday
Telegraph picture
Debraj Mitra   |   Calcutta   |   Published 30.03.21, 02:05 AM

Leaders of different religious communities greeted and fed each other sweets to celebrate a host of festivals together at the Archbishop’s House in the city on Sunday.

This year, Holi and Hola Mohalla, a Sikh festival, coincided with Shab-e-Barat and Palm Sunday. The United Interfaith Foundation India had organised a multi-religious celebration to spread the message of inclusiveness, peace and harmony.

Taking part in one another’s celebrations is the true culture of Bengal and must be preserved, the organisers said.

The participants included the Archbishop of Calcutta, Reverend Thomas D’Souza; Maulana Qari Fazlur Rahman, one of the senior-most maulanas in Bengal; and Satnam Singh Ahluwalia, general secretary of Gurdwara Behala.

Swami Achyutananda Puri, secretary of the International Vedanta Society, could not attend because of Holi-related programmes but sent a message of solidarity, saying: “Togetherness is the essence of our culture. We will continue to live together, come what may.”

Archbishop D’Souza, president of the United Interfaith Foundation, said: “The celebration of various festivals of different religions makes us aware of the presence of the divine in our midst and also inspires us to share the joy of that presence with all our brothers and sisters.”

Maulana Rahman, who leads the namaz at Red Road during Id every year, said Bengal had always been known for “harmony between Hindus, Muslims, Sikhs, Christians and everyone else”.

“But there is a conspiracy to disturb this peaceful co-existence. Outsiders are trying to spread hatred to stoke communal tension. But they will not be successful,” he said. 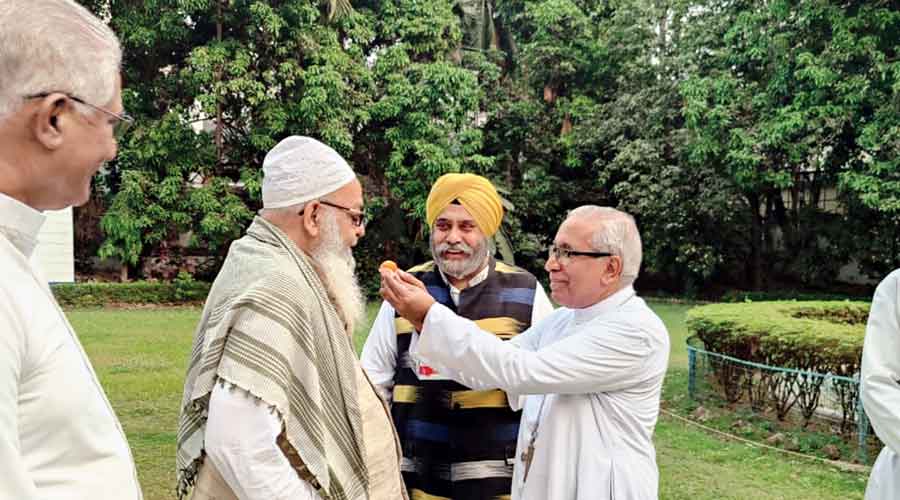 A statement from the foundation said: “The festival of Shab-e-Barat is celebrated with pomp and enthusiasm as Allah writes the destinies of all men and women for the coming year by taking into account the deeds they committed in the past, whereas Palm Sunday commemorates Jesus’s triumphal entry into Jerusalem, an event mentioned in each of the four canonical gospels; at the end all these festivals bring us together, irrespective of our differences and beliefs.”

The statement added that the interfaith meeting had been organised to deliver the message of inclusiveness at a time “unrest and divide is spreading, and the pandemic has deeply affected people”.

Foundation spokesperson Ahluwalia said: “Celebrating festivals together irrespective of religion and caste has been the culture of Bengal. We must preserve that culture. There is an attempt to pit one religion against another and spread divisiveness. But we must resist the attempt.”

The foundation, which has representatives from all faiths, had donated dry rations to thousands during the lockdown.