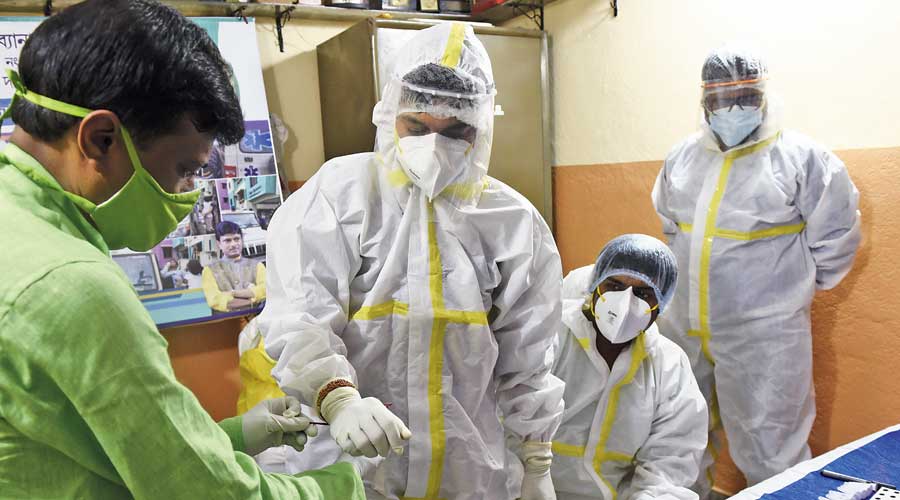 A Patuli resident ties a rakhi on a health worker on the occasion of Raksha Bandhan on Monday at a rapid antigen test centre in the area.
Sanat Kr Sinha
Kinsuk Basu   |   Calcutta   |   Published 04.08.20, 01:16 AM

People with negative antigen test results at fever clinics in medical colleges and hospitals need not immediately go for an RT-PCR test unless they have other symptoms, the state health department has said.

At a recent meeting with officials of medical colleges and hospitals across Calcutta, members of the Covid protocol committee said doctors at fever clinics should look for at least two clear symptoms of Covid infection: cough and breathing trouble or loss of appetite and smell apart from fever.

The person can be considered as a non-Covid-patient in this season of flu, the committee members have said.

The Indian Council of Medical Research (ICMR), which has approved antigen tests for Covid identification, has said a person whose antigen test results are negative should go for an RT-PCR test.

The past week saw antigen tests being conducted across medical colleges and hospitals in Calcutta and in some in the districts. Health department officials have observed senior officials at fever clinics recommending RT-PCR tests at random.

“We have told senior doctors at these fever clinics not to blindly advise RT-PCR tests to those testing negative in antigen tests,” a health department official said. “The ICMR guideline is fine. But there has to be an application of mind.”

Antigen test kits have been sent to School of Tropical Medicine Calcutta and to two hospitals, including Beleghata ID Hospital and MR Bangur Hospital.

There have been several instances of patients getting their fever treatment delayed by at least four days because they are waiting for their RT-PCR test results, which turn out to be negative, an official at Swasthya Bhavan said.

“We have written to the ICMR saying there should be a change in the guideline for retests. Let a patient, who has tested negative in antigen tests, be retested after three days and not immediately. The total viral load will show up by this time and the antigen tests can prove conclusive,” a health department official said. “The ICMR is still to respond.”