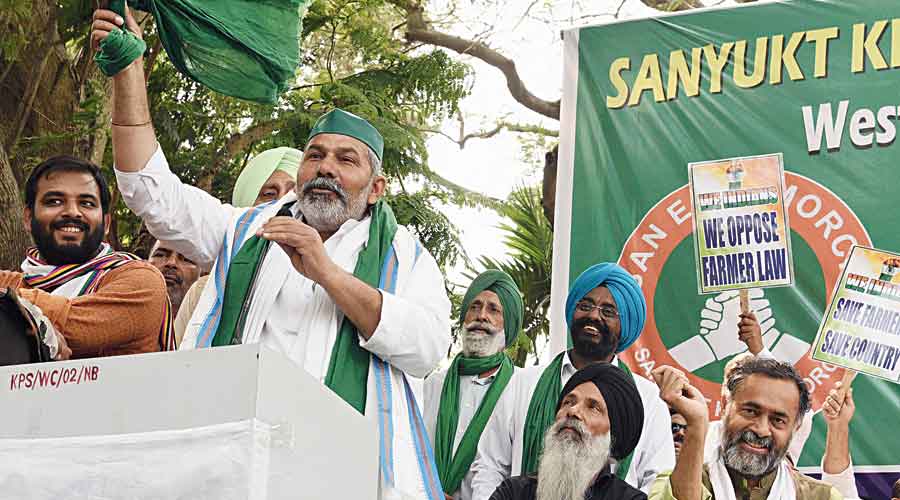 Rakesh Tikait, one of the leaders of the farmers’ movement, on Saturday urged Bengal’s farmers to demand a law on the minimum support price when BJP representatives come to them seeking a fistful of rice.

The Bharatiya Kisan Union (BKU) leader was referring to the BJP’s farmer outreach programme in Bengal, “Ek mutthi chawal sangrah (Collection of a fistful of rice)”, which party president J.P. Nadda had launched in January.

Tikait told a kisan mahapanchayat in Nandigram on Saturday afternoon that BJP representatives were coming to canvass votes on the pretext of seeking a fistful of rice, and the farmers should ask them: “Where is the law on the MSP?”

“I told the farmers in Nandigram they should ask anyone who comes for a fistful of rice to their doors: Where is the law on the MSP?” Tikait told this newspaper over the phone.

Participants in the mahapanchayat organised by the Samyukta Kisan Morcha in Calcutta on Saturday.
Picture by Gautam Bose

“They are coming not to seek a fistful of rice but to seek votes. Make the (MSP) law and we farmers will give you one quintal of rice.”

One of the points on which the Samyukta Kisan Morcha — an umbrella body leading the farmers’ protest — is agitating is the absence of a law guaranteeing the MSP to farmers, apart from its demand for the repeal of the three new farm laws.

Tikait said one reason he addressed the meeting was Nandigram’s place in the history of farmers’ struggle. An anti-land-acquisition movement in Nandigram had helped end the Left’s 34-year rule in Bengal and lifted Mamata Banerjee to power in 2011.

Tikait had earlier made a similar appeal at another kisan mahapanchayat in Calcutta after arriving in the city on Saturday morning.

He explained why SKM leaders had fanned out across the country to urge people to oppose the BJP.

“The government has not met us since January 22. We waited thinking they would meet but they didn’t. So we thought we’d go to the nation,” he said.

Tikait took a dig at the Centre, which has pushed virtually all its heavyweight ministers into the poll campaign in Bengal.

“The government did not meet us but all the leaders are here. So we thought we would go to Bengal to meet the leaders. We are here today,” he said.

The crowd at the Calcutta mahapanchayat, held on open ground beside the Gandhi statue at the intersection of Mayo Road and Dufferin Road, included many women and young people.

Tikait took off the green scarf from around his neck and urged the gathering to repeat his act. He then twirled the scarf in the air and members of the crowd followed him.

“Green is the colour of agriculture. Tikait said we should keep the BJP away from us this way,” a man in the crowd said.

Several of those who attended the meeting in Calcutta later headed to Nandigram in buses and cars arranged for them.

At the Gandhi statue in Calcutta, another farmer leader urged the Bengal voter to vote for the candidate with the best chance of defeating the BJP in their constituency.
Gurnam Singh Chaduni said Bengal’s voters could save the nation by just pressing the right button on polling day.

“If Mamata’s candidates are strong, vote in their favour. Vote for anyone who is strong but do not vote for the BJP. My Bengali brothers and sisters, a lot is at stake. You can save the country by pressing the right button.”

All the farmer leaders have repeatedly said they are not asking people to vote for any particular political party.

Chaduni was scathing about the politicians who have defected to the BJP ahead of the polls. “They did not get tickets (from their previous parties). These people are hungry for power. Drive them out of your villages. They have no desire to work for the people,” he said.