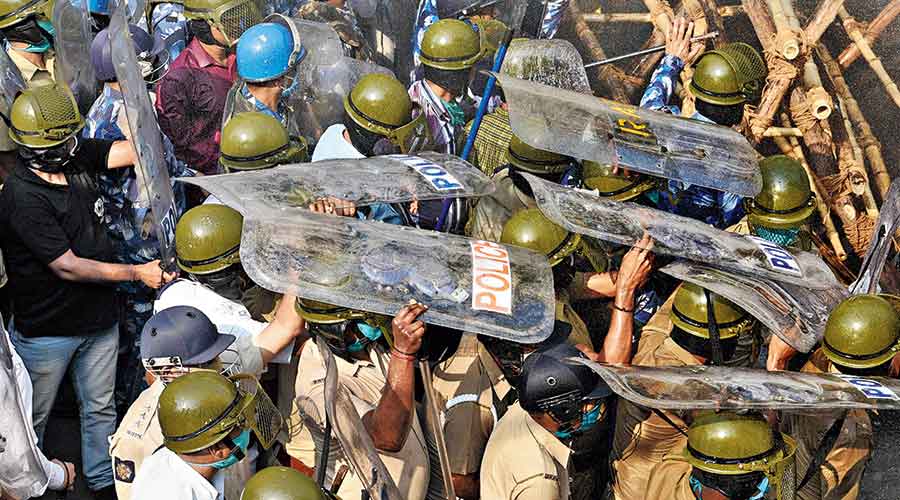 Thousands of students who are set to return to school after almost a year went to sleep with uncertainty as Left parties have called a 12-hour bandh on Friday.

The state government has allowed schools, which have been shut since March last year as a precaution against Covid, to reopen for Classes IX to XII from February 12.

Parents are anxious that going to school on Day 1 after resumption of in-person classes might be hampered if the bandh disrupts transport.

Suman Das, a resident of Piyali in South 24-Parganas, is a Class XII student at Katjunagar Swarnamoyee Vidyapith in Jadavpur. “We take a train from Piyali to Jadavpur. We are not sure whether we can allow him to go tomorrow because train services might be disrupted,” said mother Pratima Das.

Asked about the bandh, education minister Partha Chatterjee said the government would go ahead with its decision to reopen schools on Friday.

“Everybody wanted schools to reopen. What will happen to the students who will appear in Madhyamik and higher secondary exams? If they (those who have called the bandh) take any decision without paying attention to these issues, what can we do? We will go ahead with our plan,” he said.

Schools are sticking to their reopening schedule.

“We will keep the school open and also continue with online classes. Those students who will come to school will have on-campus classes and those who cannot can attend online classes. We leave it to parents to decide whether they can send their wards to school or not,” said Sunita Sen, the principal of The BSS School.

Many parents said they would accompany their children to school fearing trouble.

“I will drop my daughter in the morning and pick her up in the afternoon. I do not want her to be alone because there might be disturbance on the road,” said S. Mukherjee, who lives in Panchasayar.

Amita Prasad, the director of Indus Valley World School, expressed the hope that the bandh would not impact public transport. “Friday is the first day of school after so many months and we are eager to welcome the students back. Many senior students travel on their own and depend on public transport,” said Prasad.

“Many of our students come from places far away from Jadavpur. They rely on public transport. How will they come to school? Guardians are worried,” said Parimal Bhattacharya, the headmaster of Jadavpur Vidyapith.

“The guardians are calling us to find out what they will do. We are clueless, too. An elaborate plan to restart school has suffered a jolt,” said Subhabrata Mukherjee, the headmaster of Sanskrit Collegiate School.