Justice weeps, what more do I say? 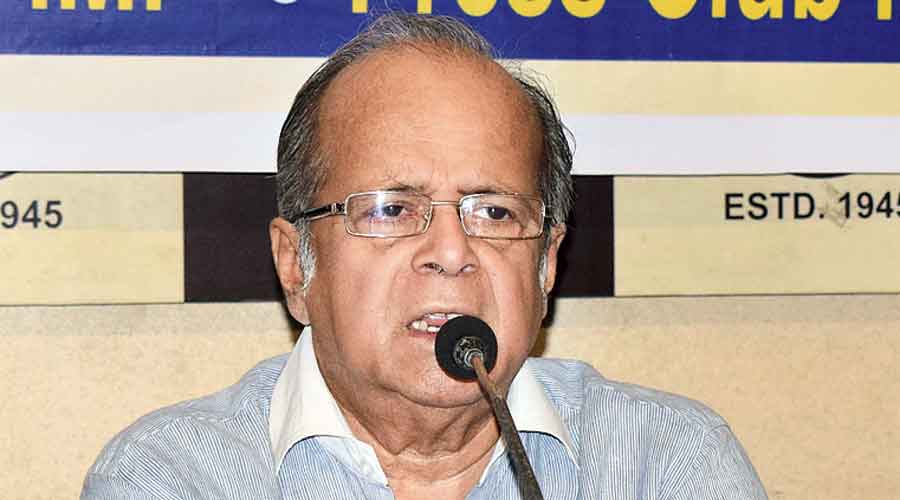 “It saddens me deeply to see the truth of that saying by Tagore even today. I feel so bad, hearing of this judgment… words fail me,” Justice Ganguly, 73, told The Telegraph. The verse was from the 1932 poem Proshno, written in protest against Mahatma Gandhi’s arrest.

“Ki bolbo bolun toh? Ei niye ar ki bolbo ami? Aajkeyr dineyr ja poristhiti, etai hoytoh protyashito. Jani na (What do I say, tell me. What more do I say about this? The situation today, maybe this is what is to be expected. I don’t know),” the retired judge said.

Reminding the nation that the Supreme Court had described (in 1994) the demolition of the mosque as “an act of national shame”, Justice Ganguly said it was “clear” that there was “elaborate planning” with “support from a political party”.

The following are excerpts from Justice Ganguly’s comments on Wednesday:

“From whatever I have heard so far, the judge (of the CBI special court in Lucknow) has said there was no pre-planning. But prior to this, there were several judgments by the Supreme Court.

“In that judgment, the Supreme Court — the then central government had issued a white paper over the demolition of Babri Masjid — had quoted from that white paper. A contradiction of that, I haven’t read anywhere since.

“Reading that, it is clear that there was elaborate planning. Who did that planning I cannot say. But that there was support from a political party, it was clearly stated, and was quoted in the Supreme Court’s judgment.

“The Supreme Court said that it was ‘a great pity that a constitutionally elected government could not discharge its duties in a matter of this sensitiveness and magnitude’. Commitments to the court and Constitution, pledges to Parliament and the people, were simply cast aside. Therein lay the failure, therein the betrayal.”

(Ismail Faruqui’s petition had challenged the validity of the Acquisition of Certain Area at Ayodhya Act, 1993, by which the Centre acquired 67.703 acres of land in and around Babri Masjid. A five-judge bench, in a majority judgment of 1994, upheld the acquisition.)

“Also, in 2017, Justice Rohinton F. Nariman’s judgment had said that this trial court where the CBI was conducting its inquiry, to expedite it… there too the Supreme Court had stated in no uncertain terms that the Babri Masjid demolition had ‘shaken the secular fabric of the Constitution’.

“Then the other, eventual judgment (November 9 last year), on the basis of which the foundation stone-laying ceremony took place there (Ayodhya). Even in that judgment, the demolition of Babri Masjid was denounced categorically.

“There too the Supreme Court stated that the act was against the law. It stated: ‘The destruction of the mosque and the obliteration of the Islamic structure was an egregious violation of the rule of law.’

(In its 2019 judgment, the Supreme Court unanimously awarded the disputed site in Ayodhya to Ram Lalla Virajman (infant Ram) and empowered the Centre to build a temple there but ruled that the demolition of Babri Masjid was “an egregious violation of the rule of law”. Justice Ganguly, who had delivered the 2012 verdict in the 2G spectrum allocation case that was celebrated by the BJP, then in the Opposition, had on November 9 last year said he was “very disturbed” with the Supreme Court’s Ayodhya judgment.)

“So, in the light of all those Supreme Court judgments, it is amply clear that the incident was condemnable and criminal. So, since it was a criminal incident, some people must have committed the crime. It did not take place on its own. What happened, happened before the eyes of tens of thousands in daylight. It was telecast globally and published in newspapers too, the act of demolition. There was no game of hide-and-seek.

“The concept of the rule of law, in the light of all this, seems but an insignificant, hollow noise now.”