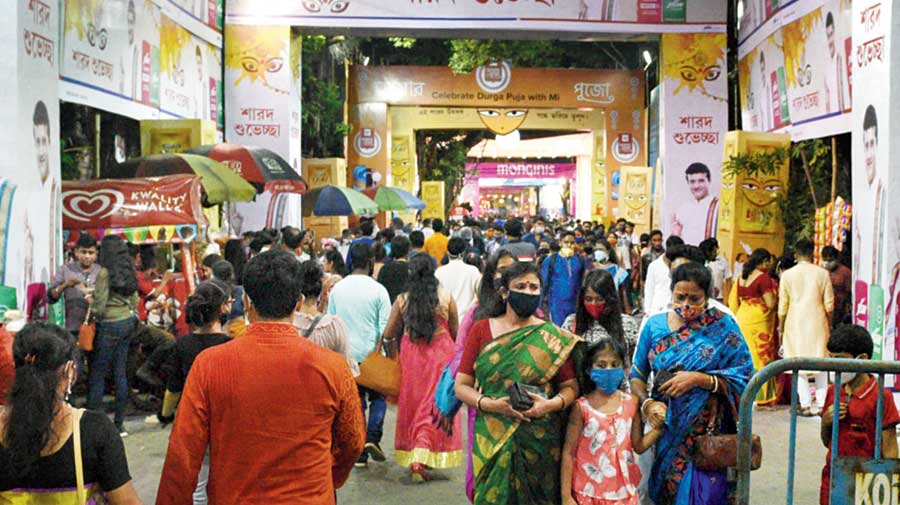 Bright sunshine during the day and clear skies in the evening ensured more people were on the roads on Ashtami on Saturday than on Saptami.

But it was nowhere close to the Ashtami crowd of previous years. 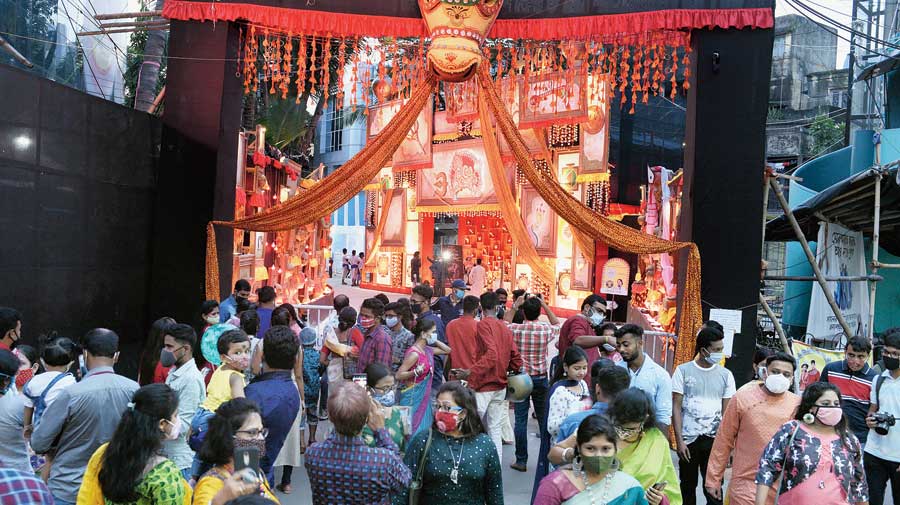 Most big-ticket pujas in north and south Calcutta saw a high turnout, the crowd comprising mostly young people. Senior citizens stayed away from pandals and chose the confines of their homes rather than taking the risk of getting infected with the coronavirus by stepping out.

“There was a slight rise in the number of people compared to Saptami,” Amalendu Sarkar of Ballygunge Durga Puja Samity, the organisers of the puja at Maddox Square, said. “But those who did come didn’t even pause after watching the idol, forget lounging in the park.” 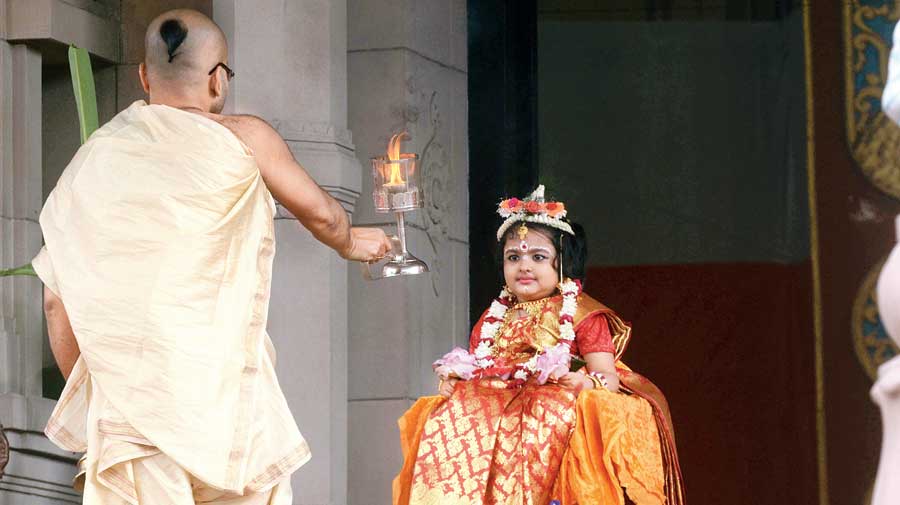 Police said cops were not trying to keep a count on people in pandals because the turnout was “a far cry from previous years”.

“The surge of visitors in every hour was missing this time. Only those who have two-wheelers or cars tried to visit some pandals,” an officer in Lalbazar said. “Even that is negligible compared to what we are used to managing on Ashtami evenings.”

For most people, adda sessions were restricted to homes on Ashtami, the day when Kumari Puja is held at Belur Math, the global headquarters of the Ramakrishna Math and the Ramakrishna Mission.

On Saturday, “Uma”, as the kumari has been named this year, was worshipped in a small pandal on the western balcony of the main temple in Belur Math.

Usually, monks bring the girl child and place her on a chair before worshipping her. This year, the child’s relatives were asked to bring her to the chair. The monks sat on chairs far away on a lawn. The compound wore a deserted look with no visitors from outside being allowed in because of the pandemic.

Close to 100,000 people visit the Math every year on the occasion of Kumari Puja, a senior monk said.

In most parts of Calcutta, people started trickling into the pandal areas from evening. Almost everyone had their faces covered with masks and many were seen with sanitiser bottles.

The crowd at Suruchi in New Alipore and Tridhara along Rashbehari Avenue in the south or Hatibagan Sarbajonin in the north watched the idols from a distance. Some, though, paused for a quick “selfie session” in some of the pandals.

“The number of visitors increased in the evening compared to the past few days,” Sandip Chakrabarty of Badamtala Asharh Sangha said. “Since ours is a drive-in and drive-out pandal, probably people didn’t find it a challenge.”

At FD Block in Salt Lake, a steady stream of people with their faces covered with masks could be seen walking and some clicking photographs of the Jungle Book-themed pandal and some taking selfies with Mowgli from across the barricades.

“This is the first time we have stepped out during Durga Puja. Although the threat of Covid is there, we decided to step out as we could not stay cooped up in our house… we had to enjoy the festivities. We haven’t taken off our masks and we have brought hand sanitiser bottles with us,” Ganguly said.

Visitors to the pandal could get a clear view of the goddess from far away.

Banibrata Banerjee, a member of the puja committee, said the number of visitors was more than that of Friday.

“On Ashtami, we had people coming from late afternoon. The number went up as evening set in,” Banerjee said.

In AK Block, pandal-hoppers were spotted clicking photographs outside the pandal.

“We are a bit sad because we could not enter most of the pandals we visited. So, we decided to take some photographs and have dinner at a restaurant,” Anandi Chatterjee, who tried visiting the Sreebhumi puja pandal but could not because of police barricades, said.

The pandal of Dum Dum Park Tarun Sangha Club had a few visitors during the day. Many who had stepped out in the evening could not enter the pandal because of barricades.

“We could not properly see the interiors of the pandal because of the barricades. This year is very different and we are happy to be out,” Sandeep Jha, who works in a Sector V company, said.