The camp was organised by Young Indians, the youth wing of the Confederation of Indian Industry 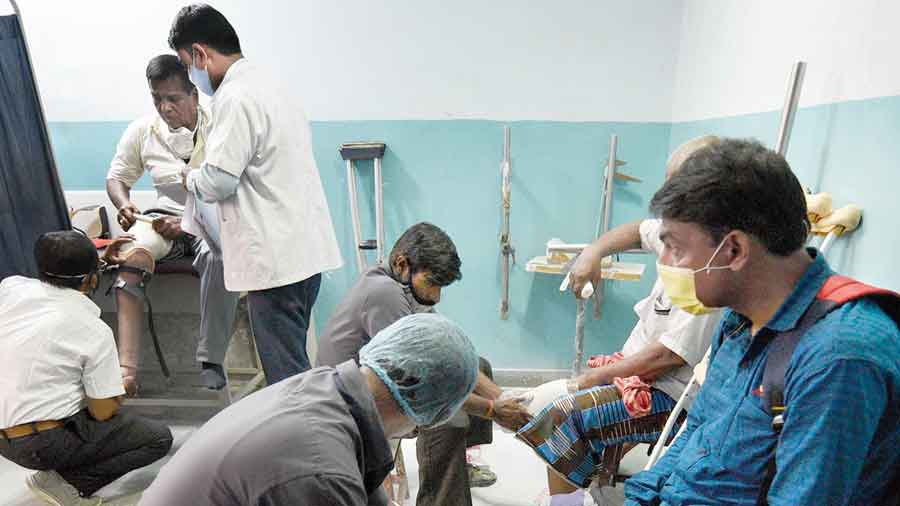 Scores of people without limbs got prosthetic legs and Covid-19 vaccines at a camp organised by young entrepreneurs on Sunday.

Around 150 people attended the camp at Ekbalpore. Over 70 people got artificial limbs. Each beneficiary, along with a family member, also got the first dose of Covishield.

The camp was organised by Young Indians, the youth wing of the Confederation of Indian Industry (CII).

The recipients included people with deformed limbs since birth. Some had to get a part of, or the entire limb, amputated after an accident or gangrene.

One of them was Susmita Chakraborty, 27. Her right leg is around 7.5 inch shorter than the left. She was born with the disorder.

“My parents deserted me because of the disorder when I was barely three-and-a-half years old,” said Chakraborty, who lives with her maternal grandmother at Kanchrapara in North 24-Parganas, 50km from Calcutta.

Her parents live in Siliguri with her younger sister. Her grandmother is a retired railway employee and her pension sustains the family of two.

Despite her physical condition, Chakraborty aspires to become a dancer. She does not have any formal training but has participated in reality shows. So far, a caliper (a metal support) held her right leg.

On Sunday, she got a prosthetic leg as well as a Covid shot. The upper portion of the limb is made of plastic. The appendage or the foot portion is made of rubber for flexibility.

“This is like a new lease of life. The limb will help me chase my dream of becoming a dancer,” said Chakraborty.

The Covid vaccination drive has not made sufficient inroads into India’s vast population of differently abled people, said rights activists.

“There are many free vaccination camps organised by the government as well as NGOs. But because of mobility challenges, it is difficult for many differently abled people to make it to the camps. So far, the state has failed them,” said a rights activist who did not want to be named because she works with the government on several projects.

“We believe in making the country self-reliant and bring the underprivileged into mainstream society. We have set ourselves a target of providing 10,000 artificial limbs in two years. We have already covered over 900. The vaccination drive is an added effort because of the pandemic,” said Arpit Dhandhania, the chairperson of the Calcutta chapter of Young Indians.

Most of the beneficiaries on Sunday came from economically backward sections.

The organisation had associated with Mahavir Seva Sadan, an NGO, for the drive to provide artificial limbs. The NGO is behind Jaipur Foot, the renowned brand of affordable prosthetic limbs.

“Every Sunday, a group of differently abled people come to the Sadan’s office at Ekbalpore to give measurements for the tailormade limbs. Next Sunday, the group gets the limbs,” said Sohan Raj Singhvi of the Sadan.

“In the recent past, our Covid task force has already set up an oxygen support system, donated ambulances for patient transfer and already provided more than 15,000 vaccine doses through various camps. We will continue the limb distribution and the vaccination drive together for two more Sundays,” said Vaibhav Soni, the co-chairman of the Calcutta chapter of Young Indians.