An eye for perfection

Lives of others: Tale of a make-up artist 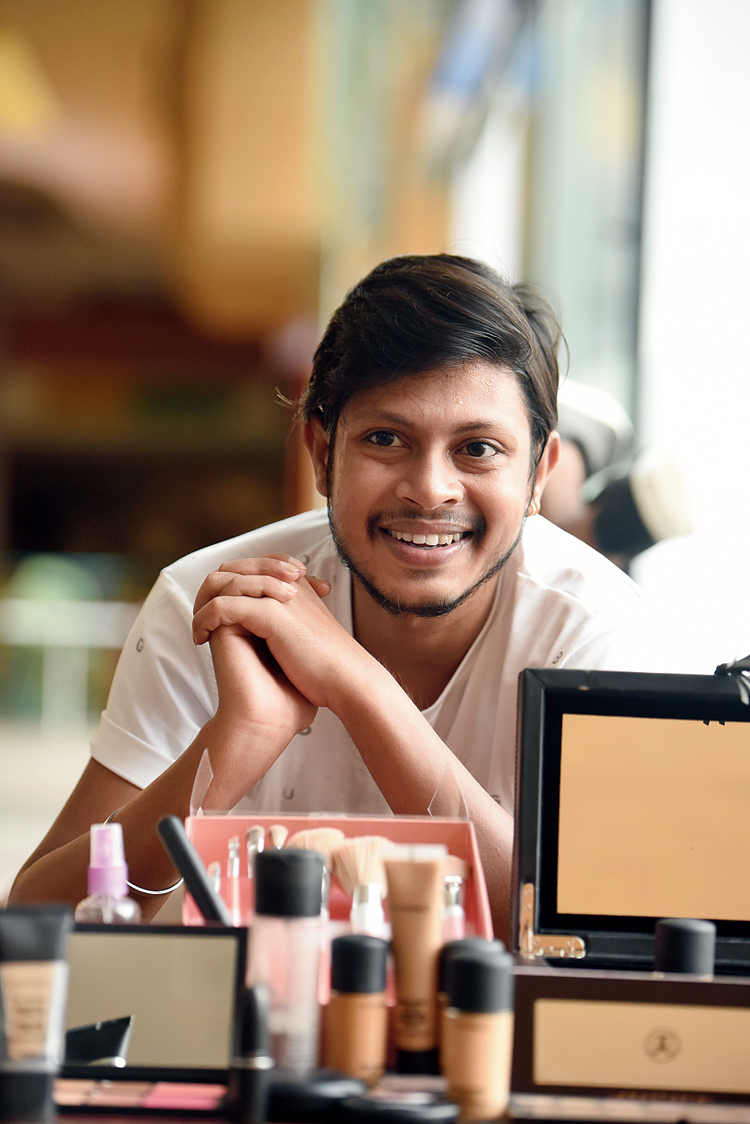 Eyes fascinate Amit Karak. “Eyes are the most beautiful features in a face,” he says. “Eyes speak. Eyes show what the person is like inside.”

That is why he likes to highlight eyes. Amit, 27, is a make-up artist who works in Calcutta’s fashion and entertainment circles, the borders of which blur into each other. He has been working for about five years in a city that he has made his own and that has just begun to recognise him.

Sitting in his rented two-room flat near Golf Green, where his mother and sister are now visiting him from North Dinajpur, a district in north Bengal, Amit speaks of a time when life around him looked less generous. He is not speaking about the lockdown. A forever-smiling and friendly person, he has not allowed even the lockdown to dampen his spirits. He is just happy at the way everything has turned out in his life since he came over from his village seven years ago.

He was born in Ramganj, a village near Islampur in North Dinajpur. A shy child growing up in a large joint family, he drew, when others boys played. “I went to school, but did not have friends,” he says.

At home, he would be fascinated watching an older cousin paint mehendi designs. The sensuous curling contours of mehndi and chandan captivated him. The cousin was a bridal make-up artist for the neighbourhood. Amit, from the time he was about 12, began to accompany her as she visited brides’ homes with her little collection of Lakme foundation bottles and kajal. There was no Sephora around.

Amit was hooked. Under the make-up artist’s hands, an ordinary woman would change into a dazzling star, even if it was only for a few hours. Make-up is a fantasy of transformation. That is why the Cinderella story is probably the most popular fairy tale in the world.

Amit, too, did not want the ordinary. By the time he took admission to Islampur College, he knew his life lay elsewhere. “I wanted to be a make-up artist. I just knew it.”

It was a difficult decision. There was disapproval and snide remarks from family members and acquaintances. What kind of men chose to be make-up artists? And his parents were of limited means.

“But my parents were absolutely supportive. I can never be grateful enough to them,” he says. With their blessings and the modest financial help they could provide, he arrived in Calcutta in 2013, still a student of second year at his college.

The quest for beauty can be particularly rough. Amit first enrolled at a one-year course for make-up and grooming at a substantial cost and then for a short two-month concentrated course on make-up. These were rewarding, and he was taught by make-up artist Kaushik Danda, but often in between classes and courses, he felt lost. The city was unknown, his future was uncertain, he was living in a cramped flat in Dum Dum that he shared with three other persons — and all this on Rs 5,000 per month.

The fashion industry is a particularly hard place. It is fiercely competitive; it resists outsiders, newcomers. Amit went through his rough phase. But one inevitable day, after putting together his own small box of tools like his cousin’s, but with the Lakmes replaced by Macs and Bobbi Browns, Amit took off on his own.

Make-up has been accused of being many things, of being the deception through which women have traditionally trapped men, or trivialised themselves, or sold themselves. “Respectable” Bengali homes did not encourage women to wear too much make-up for very long. Of course social media and the cosmetics boom, which have in their turn also helped Amit’s career, have changed all of that.

But make-up is also empowerment, and identity. The concealer can be my armour in the world: it allows me to put my best face forward and feel confident. Amit seems to apply his own brand of concealer on the unseemly bits of his life to point at the pleasing outcome of his work.

“Today many of the big billboards in the city feature my work,” he says. He has been part of numerous ramp shows, fashion shoots, video shoots and television shows in the last five years. He has worked on a film called Iti Labonyo, a Bangladeshi film called Maya the Lost Mother and another film called Shesh Chithi.

He works closely with actress Priyanka Sarkar and loves it. “She has very well-maintained skin.” He also teaches at one of the institutes where he studied.

Make-up is quite the opposite of deception for him: his forte is the “natural” look. The trick lies in selecting the right shade of foundation for the right skin tone, where training and research come in. “If the base is too light, the face looks white,” he says. “One big change that has happened in the last decade is that make-up has stopped looking obvious.”

During lockdown, he is researching make-up techniques. He stresses that he is very grateful to police and the medical community in the state for the work they are doing. His immediate aim is to get “bonu”, his younger sister, married. His long-term dream is to have his own brand of cosmetics, especially eye-shadow.

Another dream: to work on actress Deepika Padukone’s face, especially her eyes. “I don’t even know what, but I will try something extraordinary on those eyes.”

He points at an image of the old queen Nephertiti on his phone. “She has winged eyes,” he says. Make-up trends are eternal. Fantasies endure.