A serving of uninhibited fun 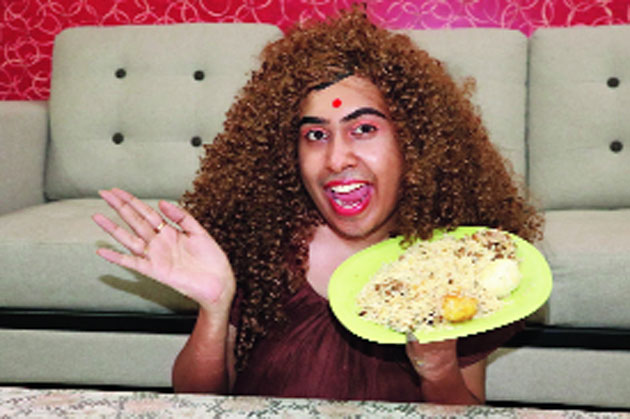 Posterity will know how much was cooked in Bengali kitchens during lockdown, as every momo, biryani or phuchka that has been made has been posted on the social media. It’s a great thing to watch. Except for a few.

They complain that seeing so much food, especially during these times, makes them sick. As do the accompanying images of domestic bliss that seem to flow naturally from the cooking.

This must be pure envy, but for these disgruntled, there is Nighty Boudi. As the name suggests, she is naughty, and though married, practically single. After lockdown, she has taken to cooking and the results are tantalising. Combining two great Bengali institutions — nightie, or the nightwear that is often worn as a dress, and boudi, literally brother’s wife, but also the seductive married woman next door — she is rampant on Facebook and YouTube.

As she gives her cascading brown curls — this can change into sleek black waves in the next video — a vigorous shake and pouts at the camera with her full red lips, it is quite clear that she is focusing as much on the momos she is making as on her host of invisible deors — brothers-in-law, but also a euphemism for willing men.

Whatever she does, she does “sexily”. For the momos and the phuchkas, she mixes the dough “sexily” and pleads with her audience to do the same in a typical affected Bengali accent. “Bhalo kore makhun,” she implores. As she speaks, her generous body heaves continuously and she keeps emitting little moans and groans. She is visibly in the throes of a passion.

Her husband, she informs briefly, is away.

Crude and in-your-face yes, but uninhibited and fun, Nighty Boudi is a refreshing break from the average cooking video. She has takers other than deors in the lakhs of her followers on social media.

She is true “camp”. As Susan Sontag says in her 1964 essay ‘Notes on Camp’, the earliest attempt to define the idea: “Camp is a vision of the world in terms of style - but a particular style. It is the love of the exaggerated.” This exaggeration is often a parody: it laughs at the original and puts it in its place.

And often, camp is not a straight view of the world.

Of course, Nighty Boudi is too good to be true. She drops hints: “I am making a momo, because I am a...,” she says, leaving a word unsaid at first, then she says she is “nothing” (kichhu na), then finally claims she is a “good boy” (bhalo chhele).

Boudi is actually Sandy Saha, 24, a well-known Bengali vlogger who is a resident of New Barrackpore on the outskirts of Calcutta. A graduate from Surendranath College, he began to vlog in 2019, often dressing up as a woman in his OTT style. Nighty Boudi, who has also made Dalgona coffee for her viewers, was invented after the lockdown.

Sandy, born Sandip, is gay and quite open about his sexuality. But that has no obvious connection with Nighty Boudi, he feels.

Neither did he set her up to perform any social correction. “I just wanted a persona that would make people laugh,” he says.

His audience is mainly young and they love what he says. His clear references to the female body, language that is at times explicit and his mannerisms — are all lapped up. His family does not mind the content of the videos either; they respect it as his profession. Have we grown less hypocritical as a society?

“I have not faced too many adverse comments anywhere,” he says. “Things have changed quite a lot in the last few years regarding acceptance levels”. Also, social media is making visible places that were not seen so much in mainstream media before, such as Sandy’s New Barrackpore locality, where he was born and grew up. The setting gives a video like Sandy’s a clear, new context.

He had always wanted to be in the entertainment business. He had taken part in the television show MTV Roadies in 2018.

Sandy also runs a beauty parlour in New Barrackpore. “I have always felt drawn towards entertainment, comedy and beauty.” He does his own make-up as Nighty Boudi and the other women, choosing the wigs, which are really too much. In one video, a woman, a precursor to Nighty Boudi, prays fervently to myriad gods to end the lockdown and get the Bengali TV serials back.

Sandy, who works with a small team, but is doing everything himself now,

Sometimes he tones himself down. For example, in the momo video, his vocabulary and gestures are less flamboyant than in the previous ones. “Because some had complained I was being vulgar.”

Of course Nighty Boudi is vulgar, but she is playfully, hilariously so. “The ultimate camp statement: it’s good because it’s awful!” says Sontag. Nighty Boudi’s “vulgarity” is a good cure for conformity and blandness.

In any case, laughter is an excellent antidote to fear, even that of death.