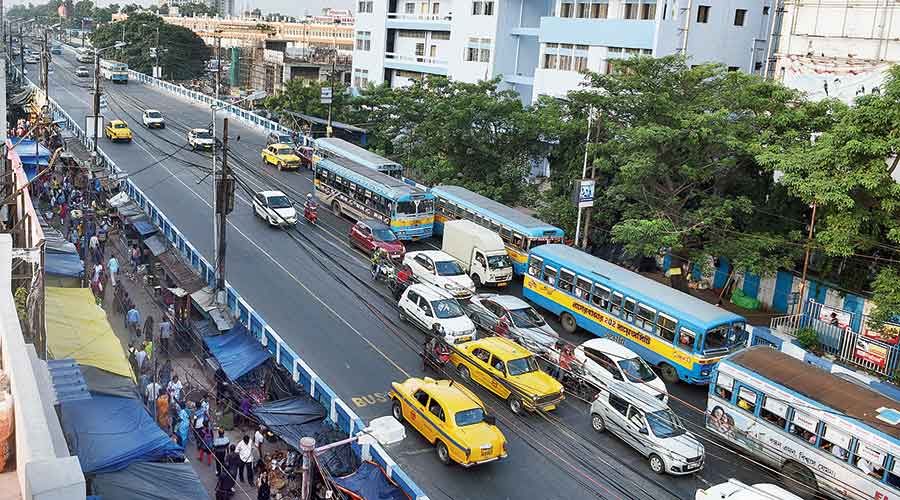 Vehicles headed for the Sealdah flyover from north will be diverted from Shyambazar, Maniktala and Rajabazar, while those moving towards the flyover from south will be re-routed from the Exide and Moulali intersections for three from the morning of October 2.

The tunnel-boring work for the Metro corridor — which, once fully functional, will link Sector V in Salt Lake with Howrah Maidan — resumed in June after remaining suspended for over three months because of Covid-19.

“Five roads will be one-way on the days the flyover will remain closed so that the traffic diversion works smoothly,” said a senior officer of Calcutta police. “Movement of trams along APC Road, Mahatma Gandhi Road, College Street and Bidhan Sarani during this period will be restricted or suspended.”

According to the traffic diversion plan, Sealdah-bound vehicles from Maniktala and Shyambazar along APC Road will be diverted from the Rajabazar crossing towards Narkeldanga Main Road, Phoolbagan and Beleghata Main Road.

Some Sealdah-bound vehicles will also be diverted from the Shyambazar and Maniktala crossings.

Moulali-bound buses and minibuses from Lenin Sarani that travel till or beyond Maniktala will be diverted along Central Avenue, and those headed for Rajabazar down Beleghata Road will be diverted from the Phoolbagan crossing.

Beleghata-bound vehicles from the NRS Medical College and Hospital-end will take the east-bound slope of the flyover and head straight.

“October 2 being a Friday and a national holiday, the traffic load will be comparatively lesser.

Then we have Saturday and Sunday. Taking these into consideration, we have decided to implement the diversion plan,” said the officer.

“From the morning of October 5, when most of the traffic would start rolling, the restrictions will have been lifted,” the officer said.