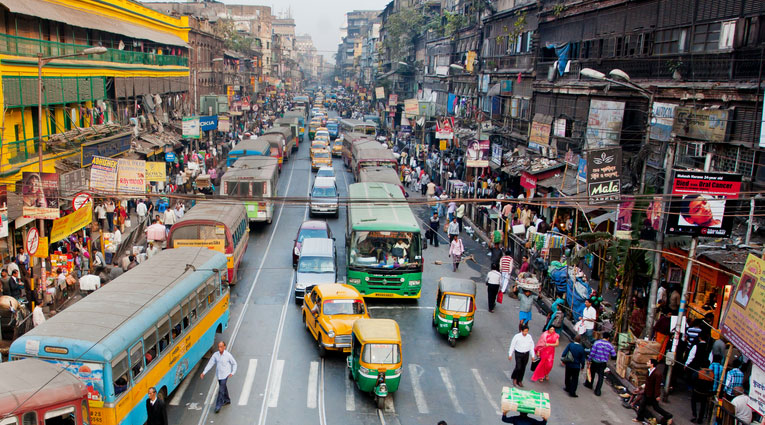 A repair work on a flyover at Dunlop just when things have been opening up has compounded the problems.
Shutterstock
Monalisa Chaudhuri   |   BT Road   |   Published 15.09.20, 01:47 AM

Travelling along BT Road for the tens of thousands of commuters using the road daily has turned from bad to worse in the past few weeks.

A repair work on a flyover at Dunlop just when things have been opening up has compounded the problems.

Trucks and buses from Dakshineswar in the west had been using the Dunlop flyover to keep the Dunlop crossing clutter-free. Now they can’t do so because of the repair work on the flyover. The result: they are on the road and travel time has gone up.

The PWD started structural repairs of the flyover from September, restricting the movement of heavy vehicles on it.

Regular commuters listed various problems while speaking to The Telegraph:

⚫Trucks cripple the traffic flow at the Dunlop crossing

⚫Lack of alternatives to BT Road

⚫Diversions in the absence of the Tallah bridge

⚫Slow-moving vehicles, including cycles, in the middle of the road

Srirup Mukherjee, a professional headed for office in Esplanade, started from Barrackpore around 9.15am on Monday. A journey that used to take him one-and-a-half hours took him more than three hours.

“To avoid the rush on BT Road, I took the Kalyani Expressway. But that turned out to be a big mistake. We were stuck in a kilometre-long snarl at the Sodepur junction and then again at the Nimta crossing,” Mukherjee said.

Mukherjee and his friend who were travelling together returned to BT Road through Belghoria hoping for better traffic movement. By then, two hours had passed.

Muktesh Gupta, a trader who was in a hurry to reach his MG Road shop, reached two hours later than the scheduled time of appointment with a client. Now that the festive season sale is about to pick up, such delays can prove costly, Gupta said. “After so many months, I had got a good customer from south Calcutta… he wanted to make a bulk purchase. Unfortunately, I reached two hours late for the meeting.”

Gupta had started from his Sodepur home around 10am. Most of his time was spent between the Sodepur and the Dunlop crossing he said.

Both Gupta and Mukherjee said cops tried to regulate traffic but the volume of vehicles appeared too large to control.

The number of vehicles and commuters on BT Road has almost doubled since local trains were suspended, according to officers in the Barrackpore commissionerate.

The road is the only option available at present for people from the northern outskirts to reach the heart of the city.

Shops and offices have opened. The Tallah bridge and the Dunlop flyover are shut. And all these have aggravated the problem.

Some cops blamed autos that sprang to life with the resumption of Metro services for the Monday madness.

“Commuters who would wait for buses will now like to use the Metro. This is exactly what happened today,” an officer said. “There was a surge in the number of autos plying till Tobin Road and Dunlop. Most passengers were headed for the Noapara Metro station.”

Congestion at the Dunlop crossing is likely to be the biggest challenge to keep the traffic moving during the festive season, according to some officers.

Thousands of trucks turn towards the city from the Dunlop crossing. “The time taken by a heavy goods vehicle to turn is at least three times the time taken by a car or other similar four-wheelers. This means, by the time a truck takes a turn, there will be a queue of at least four smaller vehicles on the road. One can imagine the sort of congestion if thousands of trucks move along the stretch,” an officer said.

BT Road is the arterial road connecting the city to the northern outskirts and it becomes exceptionally crowded every year during the festive season, police said.

“In the absence of local trains, we expect double the pressure this year,” an officer in the Barrackpore commissionerate said.