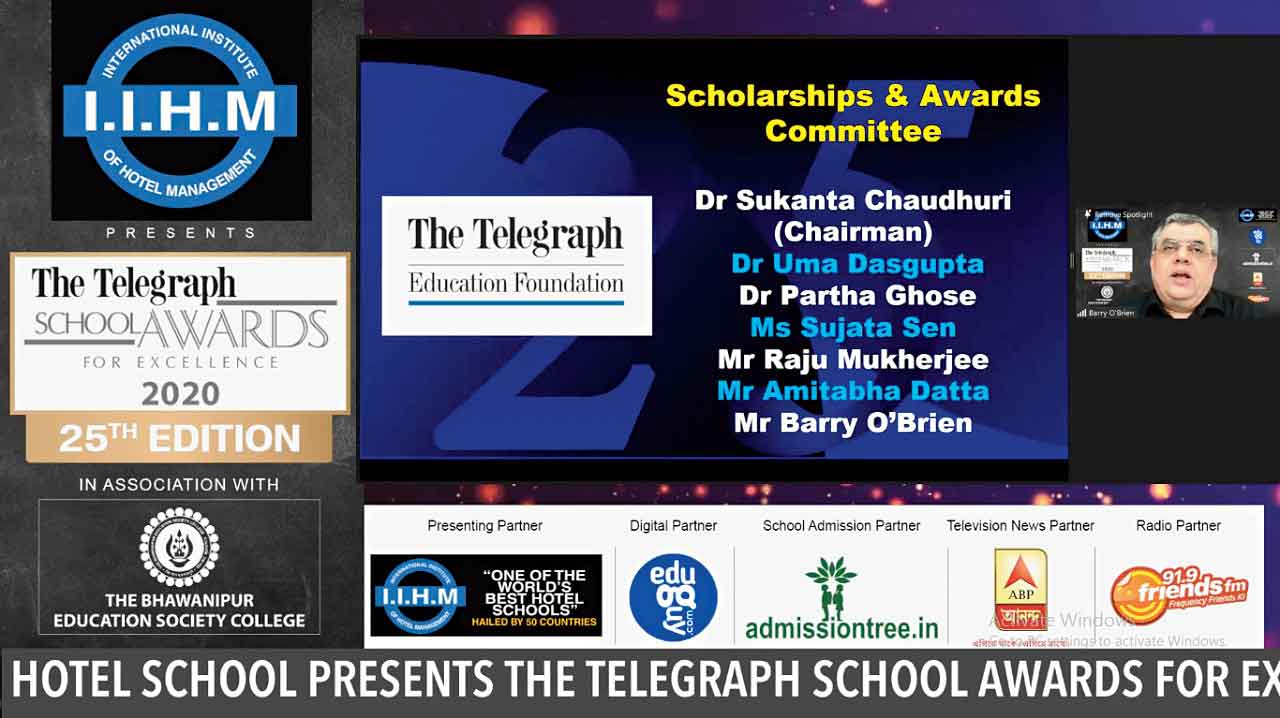 Over 5,000 viewers logged in from their phones or computers for an award ceremony that salutes young school-going fighters, which went online for the first time in 25 years.

In previous years, a school auditorium could accommodate only 1,500 odd people.

Thursday was the prelims of the IIHM presents The Telegraph School Awards for Excellence 2020, 25th Edition, in association with The Bhawanipur Education Society College.

A trustee of The Telegraph Education Foundation, and the emcee for the programme, Barry O’ Brien, described the 25 years as a “journey of growth”.

“These 25 years to recap in a few sentences has been a journey of growth, of growth not just in size, growth in us as people, people who are organising this, who have organised this for 25 years. People who have joined us on the journey. Some have jumped off but many have stayed on with us,” said O’Brien.

He said the most important part of the work of The Telegraph Education Foundation is to reach out to those boys and girls who are struggling not just to complete their education but to make ends meet.

“Stories, how boys and girls living in far-flung districts and villages have eaten muri before they went to school, ridden on their cycles for a few kilometers or walked, come back to another meal of muri. And then gone on to score 80-85, 90 -95 per cent marks and got admission in some of the top colleges and universities,” said O’Brien.

Such stories abound in the school awards year after year. And so it did on Thursday, despite the pandemic.

The ceremony acknowledged Subhankar Das of Silver Point School for writing his Class X board exams from hospital, where he was admitted because of a dark patch on his left lung. The boy scored 80 per cent.

Priyanka Bhanja Chaudhary, a Class XI student of Agrasain Balika Siksha Sadan, slipped and fell while coming down the stairs last year. She suffered a spinal cord injury and was unable to stand. Three months of treatment and her indomitable spirit saw her back on her feet.

While students got their due recognition, the award ceremony also acknowledged the efforts of teachers who have given their life or several decades to teaching and the non-teaching staff who look after the gardens and keep the buildings spic and span, pandemic or no pandemic.

And then there were schools that care, not one but quite a number.

“We know that all schools care. They care for their students, they care for society. We have been and we have always been on the lookout these 25 years that maybe care a little more consciously,” said O’Brien before announcing The Caring Minds Award for ‘A School that Cares’.