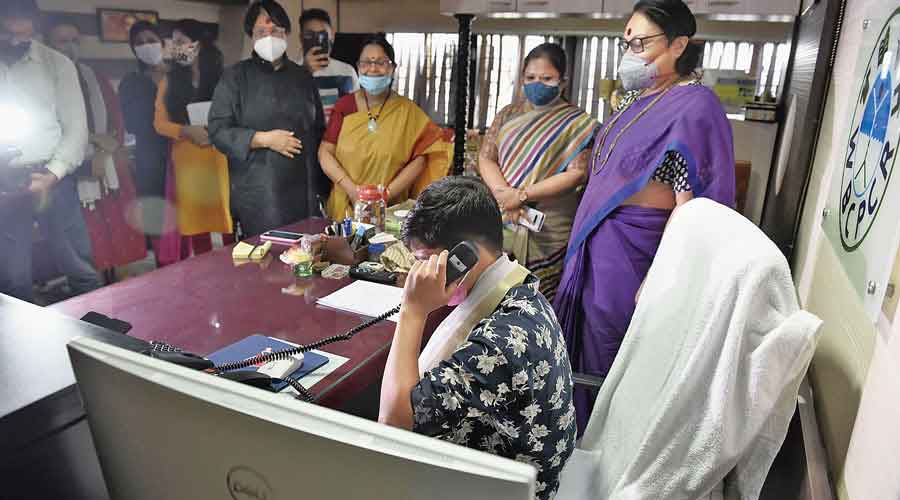 The boy at the office of the West Bengal Commission for Protection of Child Rights on Friday.
Bishwarup Dutta
Our Special Correspondent   |   Calcutta   |   Published 31.07.21, 02:36 AM

A 15-year-old boy who was trafficked as a child labourer at the age of seven was made chairperson of the state commission for protection of child rights for an hour on Friday.

“I was fortunate to be rescued. But many children are not so lucky,” the teenager told The Telegraph.

The boy from north Bengal was trafficked by a person while he was playing with friends. He was taken to a family who forced him to work as a domestic help.

“His work included mopping floors, washing clothes and looking after a baby girl in the family. He had spent a year there before being rescued,” said an official of the West Bengal Commission for Protection of Child Rights.

Minors are forced to work as domestic workers across the state, said rights activists.

The boy, who lives with his parents and siblings, was made chairperson of the panel to mark the World Day Against Trafficking in Persons.

He studies in Class VII now. “History is my favourite subject,” he said.

Some of his demands the commission will place before Shashi Panja, the minister in-charge for women and child development and social welfare:

⚫ The government must ensure sponsorship for children forced into labour, because of the situation at home, so they don’t have to leave school

⚫ Traffickers should be punished strongly and fined heavily. They should be made to bear all expenses of the victim’s education.

Last November, a 17-year-old girl who grew up in a red-light area became the chairperson of the state commission for protection of child rights for an hour in what officials said was a first-of-its-kind move.