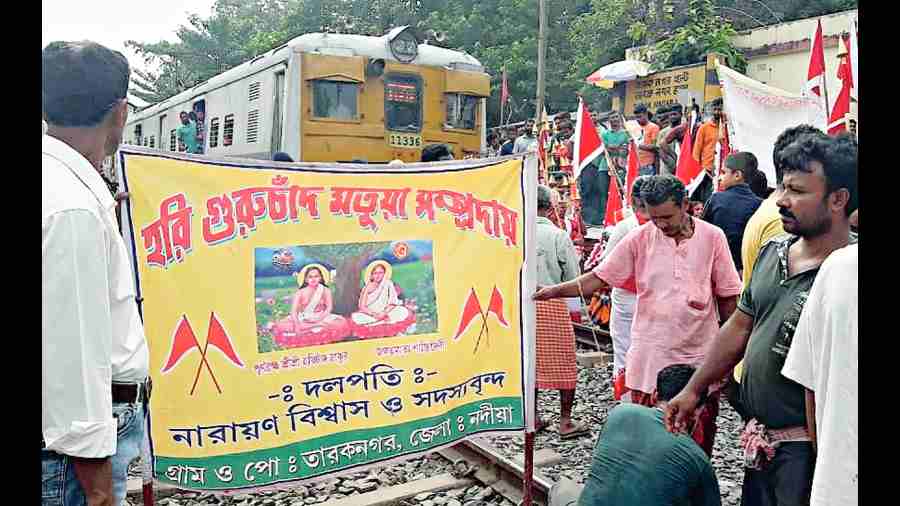 Members of the Matua community block the tracks near Taraknagar station on Friday morning.
Subhasish Chaudhuri   |   Calcutta   |   Published 11.06.22, 02:08 AM

Train services were disrupted for about three hours on Friday morning in the Sealdah-Gede section owing to a blockade put by members of the Matua community at the Taraknagar station in Nadia demanding removal of a fencing erected by the railway authority to prevent illegal crossing across the tracks.

Officer-goers were inconvenienced while the Dhaka-bound Kolkata-Dhaka Maitree Express had to remain stranded for about three hours at Kalyani station that left Eastern Railway authorities embarrassed.

The blockade was withdrawn only after ER authorities assured the local Matua leaders to remove the blockade and to consider putting a level crossing at the spot so as to help people cross the railway tracks legally.

Local sources said that in absence of a rail gate, residents who live close to Taraknagar rail station, the residents during 2019 had put up a “drop gate” using bamboo poles on either side of the track similar to rail-gate at an open intersection of a busy PWD road and railway tracks to avert accidents. They also deployed the three unemployed youths to guard the spot round the clock at their cost.

At the same time, the local residents as well as the local gram panchayat authorities continued to appeal for a formal level crossing at the spot due to the intersection of the arterial road that connects Krishnagar with Bogula, which has become an accident-prone zone. But appeals for level crossing were turned down by the railway authorities.

While the “drop gate” continued at the spot until last week when the Eastern Railway authorities had put fencing along the track to prevent ‘illegal’ crossing that cuts down a detour to reach the busy Krishnagar-Bagula road.

Swapan Ghosh, a local businessman said, “The Krishnagar-Bagula road is very important, and since its repair traffic has increased. But the railways authority failed to understand its importance and erected fencing along the track so that no one can cross it using the drop gate."

A railway officer said: “A railgate at the spot is not feasible at all. The road runs almost adjacent to the station and has heavy traffic movement. In station yards where traffic rush is high, traffic and other operational problems are likely to be encountered. An alternative diverted alignment of the road far from the station yard can get a level crossing that residents should take up with state administration”.

Matua leader and BJP MLA later spoke to the DRM, Sealdah, and persuaded the demonstrators to withdraw the blockade. "I spoke to the DRM and told him that preventing people from crossing the track through the road stretch was inhuman. At the same time the ER authorities should consider installing a level crossing in the area," Adhikari said.