BJP targets Durga Puja pandal, which potrays farmers' protest, over use of shoes

This heinous act of insulting the goddess in the name of artistic liberty won't be tolerated, says Suvendu 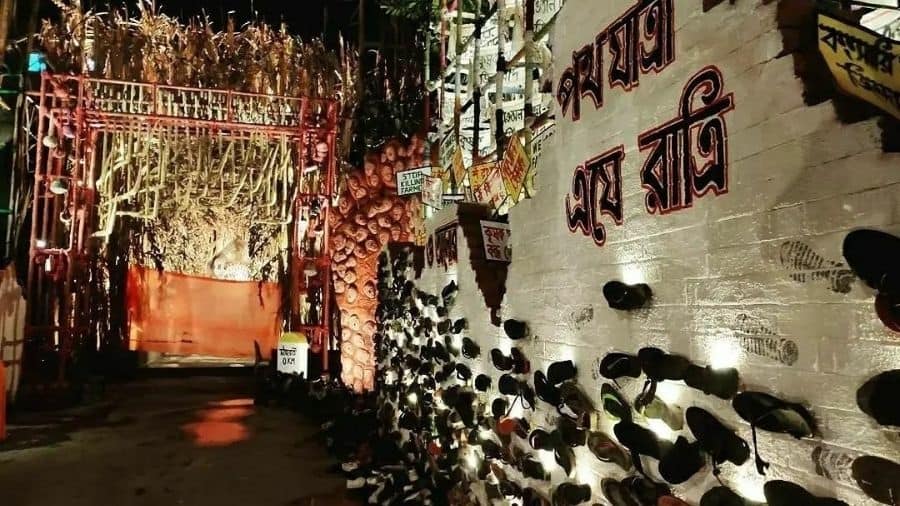 The BJP on Saturday objected to the use of shoes for "decorating" a Durga puja pandal here, alleging that it would hurt religious sentiments of people.

Organisers of the puja pandal in Dumdum, however, rejected the assertion and said that the shoe installation on the sidewalk leading to the marquee depicts farmers' movement in the country, and the Durga idol, set up at a considerable distance from it, is surrounded by paddy stacks.

Leader of Opposition Suvendu Adhikari said in a tweet on Saturday that the organisers have committed a "heinous act" by adorning the pandal wall with shoes, and urged the chief secretary and home secretary to look into the matter.

"A Durga Puja pandal in Dumdum Park has been decorated with shoes. This heinous act of insulting Maa Durga in the name of 'Artistic liberty' won't be tolerated. I urge the Chief & Home Secretary @egiye_bangla to intervene and compel the organizers to remove the shoes before Shashti," he added.

Echoing him, former Meghalaya governor and veteran BJP leader Tathagata Roy told reporters that "everything cannot be tolerated in the name of artistic freedom. This is a grave insult to goddess Durga and hurts our religious sentiment".

An office-bearer of Dumdum Park Bharat Chakra puja committee, on his part, clarified that the shoe installation was at a distance from the pandal.

"Our theme, this year, is farmers' agitation. As part of the theme, the path leading to the pandal has shoe installations to symbolise a scene after a police lathicharge on agitating farmers, which forced them to run helter skelter. Such scenes were witnessed recently.

"Inside the marquee, Devi Durga and her progeny are surrounded by paddy stacks," he added.