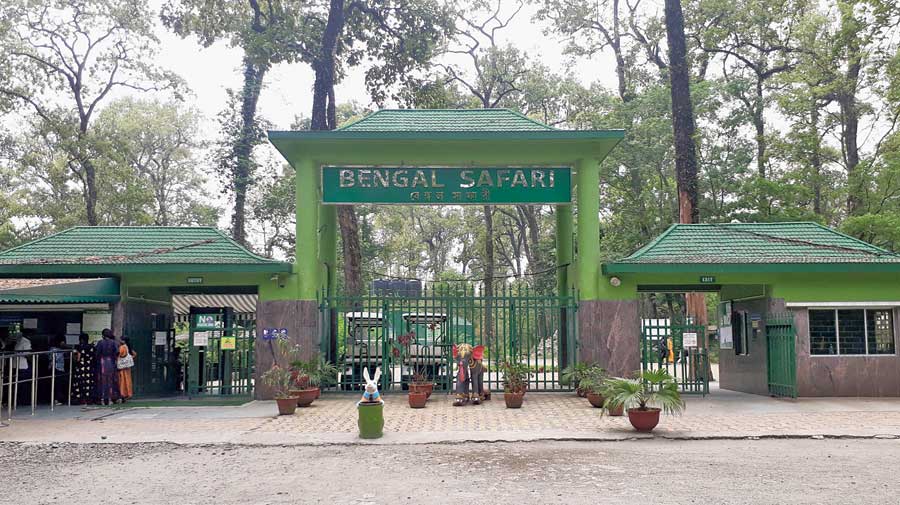 Gates of the Bengal Safari Park — the only one of its kind in the state nestling on the outskirts of Siliguri — will reopen for visitors on Friday, along with all other zoological parks of the state.

Last week, the state forest department made the decision to allow the resumption of visitors in zoos.

The department has also drawn up a series of health safety measures which are to be followed by the staff and visitors in all these locations in view of the Covid-19 pandemic.

Sources in the department said that on Wednesday, a mock drill of forest guards and other staff was conducted at the Bengal Safari Park to apprise them on safety protocols to follow. The staff, henceforth, will also be able to guide the visitors to adhere to such health directives.

“This park on Siliguri outskirts is one of the major attractions for wildlife lovers in north Bengal. As we will open it for visitors on October 2, we thought of conducting the mock drill first. There are a few things which every visitor has to follow for safety as he enters the park (in view of the pandemic),” said Badal Debnath, the director of the park.

Elaborating on these, Debnath said that all vehicles of visitors would be sanitised before entering the park area. Moreover, each visitor would be screened with a thermal scanner for his or her temperature to be checked before entry.

Also, no ticket would be sold at counters. Visitors will have to buy tickets online to do away with human contact.

The visitors, park director Debnath said, can enjoy safaris in animal enclosures. However, only 12 passengers would be allowed in the 24-seater buses which take visitors around on the safaris. Moreover, the popular elephant safari at the park won’t open immediately.

A crowd-puller before onset of the Covid-19 pandemic, the park is spread over 297 hectares and has enclosures for tigers, leopards, the Asiatic black bear, gharials (fish-eating crocodiles), the rhino, and different species of deer. It also has an aviary.

Debnath added: “People can watch the male tiger and two growing cubs in the safari. But the tigress and its newborn triplets will be in quarantine for some more days before they are released for public viewing.”

In the hills, the Padmaja Naidu Himalayan Zoological Park, a popular destination of tourists in Darjeeling town for decades, will also reopen on October 2. More commonly known as the Darjeeling zoo, it is known for housing the red panda, Himalayan black bears and snow leopard, among other high-altitude and endangered animals.