7 years on, Pope Francis remains son of his soil

Pontiff a symbol of refreshing leadership, humility and simplicIty 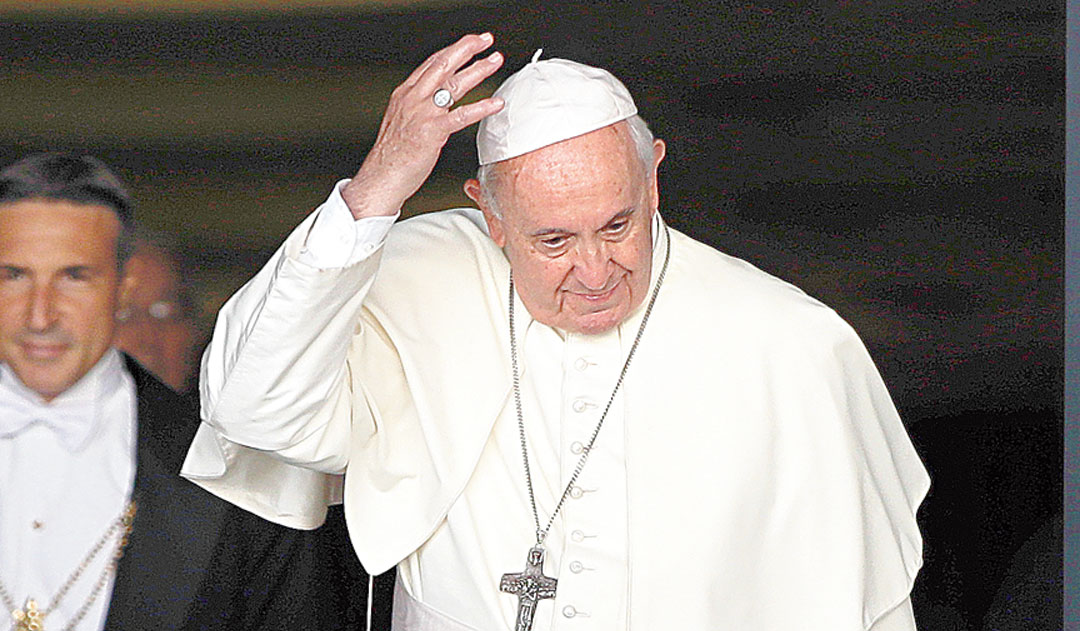 Following the resignation of Pope Benedict XVI on February 28, 2013, a papal conclave of 115 cardinals elected Bergoglio as his successor on March 13, 2013. The Telegraph gave a wide coverage, carrying a front page report on the election and the Jesuit Pope on the following day.

On his first papal day itself, Pope Francis displayed a deep sense of humour while he told his Cardinals who elected him as Pope, “May God forgive you for what you have done.”

In less than an hour, he shunned the papal limousine and boarded a bus, declined the throne-like chair of the Pope. And he is the first Pope to pick up his luggage and pay his hotel bills at the Vatican after the election.

Francis has a refreshing style of leadership — in living and functioning at the Vatican. This is what we call servant leadership combined with humility and simplicity.

Born in December 1936 in Argentina and baptised as Jorge Mario Bergoglio, Francis is the first Jesuit to be elected Pope, first Pope to take the pontifical name of Francis in honour of

Bergoglio was ordained a priest in 1969, and was Argentina’s Jesuit provincial from 1973 to 1979. He was appointed the archbishop of Buenos Aires in 1998 and was made a cardinal in 2001 by Pope John Paul II.

Throughout his life as Pope, Francis has been globally visible and publicly noted for his humility, simplicity, emphasis on God’s mercy and justice, concern for the poor and commitment to interfaith dialogue.

He is acclaimed and credited for his less hierarchical approach to the papacy than his predecessors: for instance he chose to reside in the Domus Sanctae Marthae guesthouse rather than in the papal palace used by previous popes. He believes that the Church should be more transparent, simple and welcoming.

In international relations, he has helped to restore full diplomatic relations between the US and Cuba and supported the cause of refugees during the European and Central American migrant crises. He made the Holy See intercede to promote peace in South Sudan and Columbia.

Francis has faced increasingly severe criticism, particularly from some conservative theologians, cardinals and Bishops on many questions, including the admission of civilly divorced and remarried Catholics to Communion with the publication of Amoris Laetitia (the Joy of Love) and on the question of the alleged cover-up of clergy sexual abuse, against which he promulgated Vos estis lux mundi (You are the light of the world).

In the 2005 papal conclave that elected Pope Benedict XVI, Bergoglio was a frontrunner. As reported by an Italian magazine Limes, Bergoglio had been the runner-up and main challenger to Cardinal Ratzinger. He had received 40 votes in the third ballot, but fell back to 26 at the fourth and decisive ballot.

The reason for this fall lies in the claim that according to a diary purportedly belonging to an anonymous cardinal who had been present at the conclave, Bergoglio was in close contention with Ratzinger during the election, until he made an emotional plea that the cardinals should not vote for him. According to the diary, Bergoglio made this request to prevent the conclave from delaying too much in the election of a Pope.

During his seven years of papacy, the 266th Pope has worked to make the Roman Catholic Church more realistically relevant and active for its 1.3 billion Catholics around the world.

With his reinvigorating presence in the world, Francis enjoys a global reputation as one of the most popular popes and leaders. He has amassed 18.2 million Twitter followers and, in 2019, became the subject of the acclaimed film, The Two Popes, which received three Oscar nominations.

He displays a pastoral approach, by which he tries to minister to people’s needs in real life, shepherding them in difficult situations, rather than handing down pulpit rules as to how they should behave.

Francis has also brought change within the administrative structures of the Vatican and the Church. Analysts say that transforming the Synod meetings from an austere formality into a platform for energetic debate may go on to be seen as Francis’s greatest achievement.

In the spirit of genuine and healthy inter-religious dialogue, Francis has made efforts to foster ties with other religions. He travelled to the United Arab Emirates in 2019 and presided over a historic Mass on the Arabian Peninsula and addressed hit-button global issues, including migration and climate change.

Pope Francis reignited his influence as a global environmental leader as he released an impassioned 94-page “exhortation” document in February, 2019, entitled Querida Amazania (Dear Amazon) regarding the fate of the Amazon biome and its indigenous people.

The document comes as the Amazon faces “deforestation at breakneck rate” driven by illegal logging, mining, ranching and agribusiness in Peru, Bolivia, Columbia and Brazil, a nation that had also seen a sharp spike in killings of indigenous activists.

Brazil’s President Jair Bolsonaro has lashed out at the Pope after his plea for the protection of the Amazon rainforest and has attacked the environmental group, Greenpeace as “rubbish”.

Bolsonaro has often railed against international criticism of his environmental policies as an attack on Brazilian sovereignty. “Well, the Pope may be Argentinian, but God is Brazilian,” commented the president.

But Francis has said that the Amazon is his, the world’s and everyone’s.

He has urged Catholics to “feel outrage” over the exploitation of indigenous people and devastation caused by mining and deforestation in the Amazon.

Despite becoming a global leader, Francis’s love of his homeland is evident. A lifelong fan of Buenos Aires’ San Lorenzo de Almagro football club, Francis has a large collection of club memorabilia, on display in the Vatican Museum. He is said to also enjoy tango dancing, he remains a son of his soil.