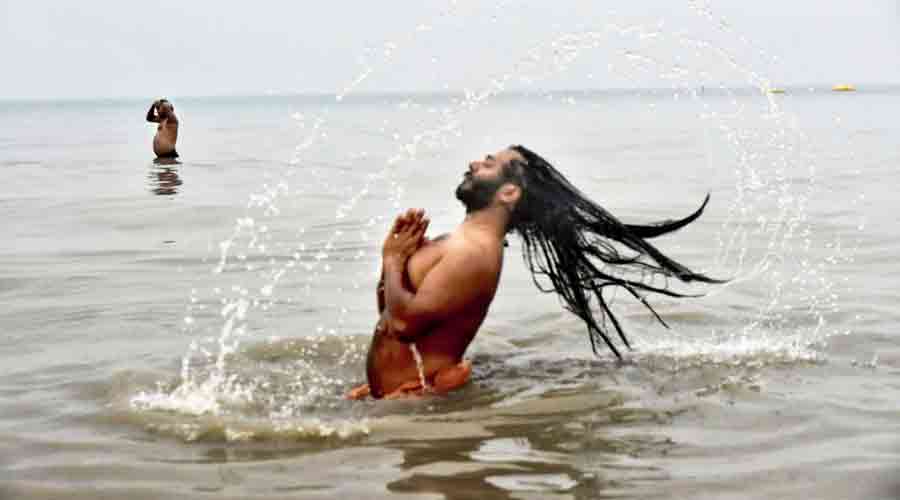 Covid protocols were visibly violated at the Gangasagar Mela on Sagar Island of South 24-Parganas as over one lakh pilgrims took a holy dip on the occasion of Makar Sankranti and later jostled in long queues to offer prayers at the Kapil Muni temple on Friday.

Efforts at social-distancing proved futile as pilgrims — mostly without masks — thronged Sagar Island, putting police, civic volunteers and civil defence personnel in a dilemma over enforcing Calcutta High Court directives, which were unequivocal in its stress on implementing Covid safety. Still, most police personnel and civic volunteers were seen as mute spectators as devotees jostled in violation of Covid protocols and rushed to take the holy dip and offer prayers at the temple.

Sources in the administration admitted that scenes on the island and at several entry points since early on Friday morning were marked by violation of Covid protocols.

The sources said the anticipated footfall on day one was overshot despite the incessant rain and cloudy weather. “The state administration failed to put in any exact number of pilgrims who had visited till Friday, except sports and youth affairs minister Aroop Biswas who in a relieved tone told reporters in the evening that gross attendance on this auspicious day was only about 25 per cent in comparison to last year’s visit,” said a source.

Detailing Covid safety measures adopted for the Mela, an official of the district administration said that till Friday, 10.8 lakh masks had been distributed amongst pilgrims. Additional police forces were also deployed and 38 drop gates erected.

He said that till Friday, 97,345 rapid antigen tests had been conducted, apart from 10,215 RT-PCR tests. The official added that 43 pilgrims had tested positive at the entry points to the island.

“On the island itself, only one pilgrim has been found positive so far,” the official said and added that  171 persons had been put into safe homes while one devotee was airlifted on Friday for medical treatment.