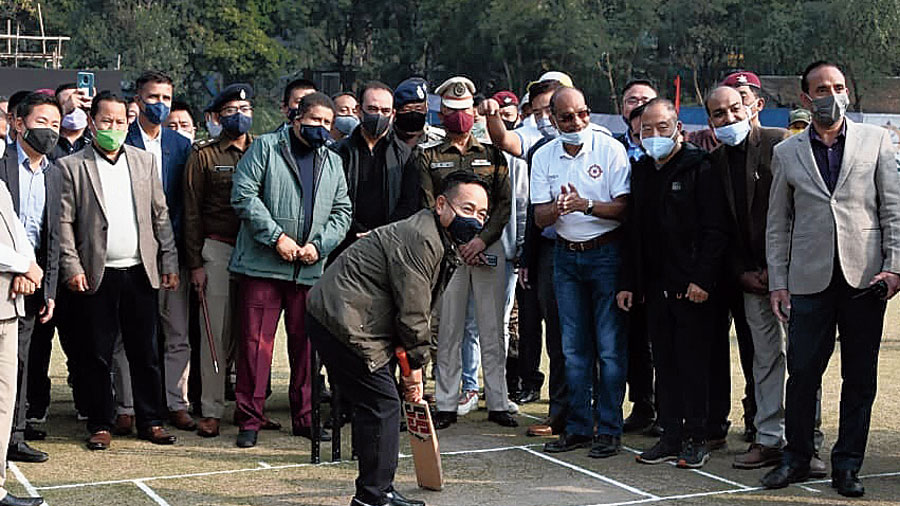 Sikkim’s first cricket carnival came to a rather lacklustre end with Alpine Sporting Clun humbling Black Eagle (Sikkim Armed Police) by 125 runs in the one-sided final of the Khangchendzonga Shield 2020 (Men) at the Sikkim Cricket Ground (SCG) near Rangpo on Sunday.

The over month-long inter-club tournament featuring 33 teams from across the Himalayan state along with a shorter four-team women’s event were the first to be organised by Sikkim Cricket Association (SiCA), two years after it was granted full membership of the Board of Control for Cricket in India (BCCI) in 2018.

Batting first, Alpine rode knocks of 56 by captain Nilesh Lamichaney, 34 by Adiv Tamang and 32 by Afzar Hussain to post an imposing 200 for 5 in their allotted 30 overs. In reply, Black Eagle folded up for a paltry 75 in exactly 23 overs with extras (26) being the highest contributor.  For Alpine, Anurodhan Pradhan bagged four wickets conceding just seven runs and Md. Ronak chipped in with 3 for 14.

In the final of the women’s event played on Saturday, Mount Pandim beat Mount Kabru by a slender margin of 14 runs to lift the first Khangchendzonga Shield (Women).

Given that women’s cricket in Sikkim is only just taking baby steps and the player pool is very small, only four teams comprising 64 players took part in the inaugural tournament.

However, both the association and cricket lovers in general were enthused by the growing popularity of the sport as witnessed by the encouraging response to the twin tournaments.

“This will be a historic moment. Earlier, there used to be very few players and we used to struggle to send a team for tournaments outside. This time, 64 players participated. I feel our girls have started taking an interest in cricket,” said Nayan Bhutia, the coach of Mount Pandim.

Atul Gaikwad, the BCCI-certified coach and SiCA’s recently-appointed honorary director of coaching, said the standard of cricket in the state would surely grow, given the players’ exposure to high performance environment.

“There is lot of talent here, lot of passion. Just (about) how to shape them in a proper way,” he said.

Sikkim chief minister P. S. Tamang (Golay), who was the chief guest at the men’s final, lauded SiCA for promoting cricket in the state and creating a top facility like the SCG. “It gives me immense pleasure and satisfaction to see the game of cricket flourishing in our state and more and more children and youngsters taking interest in the sport,” he said.

Golay also said his government was mulling constructing one more ground adjacent to the SCG to make it a venue capable of hosting international matches.

“We are preparing a DPR in this regard. I am doing this of my own volition not because the Sikkim Cricket Association has given me any such representation,” said Golay who had been the SiCA president from 2005 to 2009.