Zidane faith in Vinicius pays off 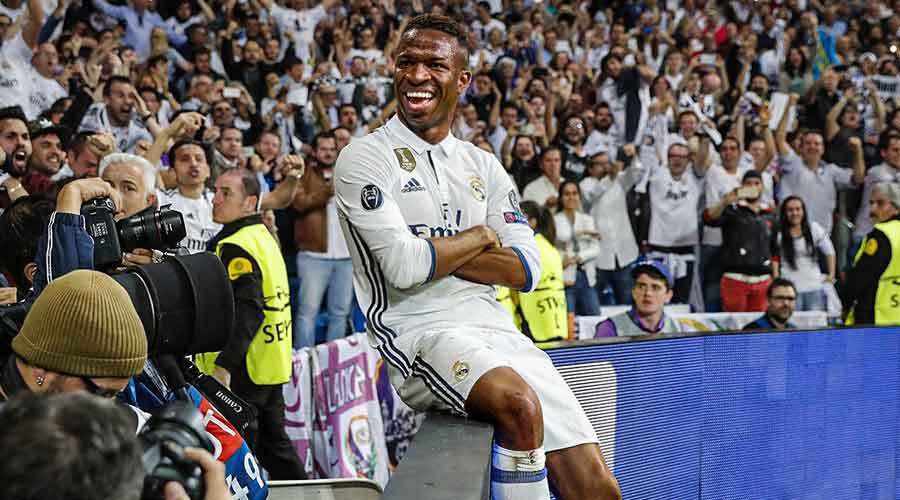 Real Madrid coach Zinedine Zidane praised his forward Vinicius Jr for rising to the big occasion after the Brazilian’s two goals helped his side to a 3-1 win over Liverpool in Tuesday’s Champions League quarter final first leg.

Vinicius was signed by Real from Brazilian giants Flamengo when he was just 16 and despite showing flashes of brilliance and exceptional dribbling ability, his time in Spain has often been overshadowed by lacklustre finishing. Before Tuesday, he had scored only 12 goals in 105 Real games while his erratic play led to strike partner Karim Benzema telling teammate Ferland Mendy to avoid passing to the forward during half-time at a Champions League game earlier this season.

But the 20-year-old thrived in the spotlight against the Premier League holders and 2019 Champions League winners, breaking the deadlock with a cold-blooded finish after expertly bringing down a Toni Kroos ball with his shoulder.

“I’m delighted for him, we are seeing some fantastic stuff from him right now,” Zidane told reporters.

“We know how good he can be when he gets into space, as he showed with the first goal, which was fantastic.”

Marco Asensio doubled Real’s lead before half-time but Mohamed Salah’s strike offered Liverpool a way back into the tie, only for Vinicius to pop up again and deliver a potentially fatal blow to Juergen Klopp’s side.

“He was lacking a goal here or there and getting two tonight (Tuesday) will really lift his confidence, he deserved what happened tonight,” added Zidane.

Vinicius, who kissed the Real badge after each of his goals, admitted he was exhausted after his performance. “I gave everything for this shirt, which I love so much,” he said.

“People on the outside can talk all they want but I always worked, my teammates have given me the strength I needed to get to this stage and score the goals we needed.”

Liverpool’s defence was caught out on two occasions in the first half, allowing Vinicius and Asensio to score.

“We made it too easy for them,” Klopp said. “If you want to go to the semi-final, you have to earn the right to do so. We didn’t do that tonight, especially in the first half. The only good thing I can say, apart from the goal, is it’s only the first half of the tie.”

Klopp was disappointed with his side giving the ball away too casually, which led to him hauling off Naby Keita before halftime for Thiago Alcantara.