The Germans, who have now won all four matches under new coach Hansi Flick, lead the standings in Group J with 18 points from seven matches, six ahead of North Macedonia and Armenia 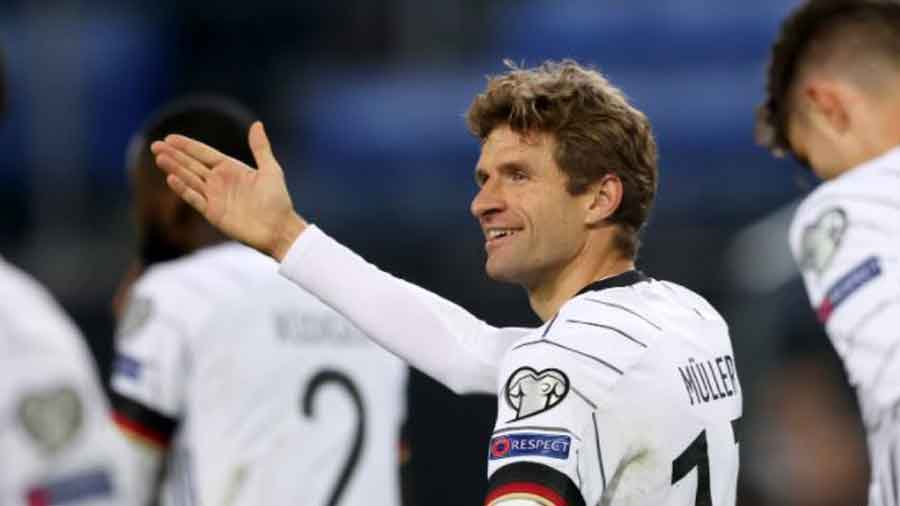 Substitute Thomas Mueller scored an 81st-minute winner to complete Germany’s 2-1 comeback win over visitors Romania in their 2022 World Cup qualifier on Friday that kept them on course for a spot in next year’s tournament.

The Germans, who have now won all four matches under new coach Hansi Flick, lead the standings in Group J with 18 points from seven matches, six ahead of North Macedonia and Armenia.

Germany, eager to make amends for their last two disappointing tournament performances at the 2018 World Cup and this year’s Euro, have conceded just one goal in their last four matches.

They could now seal their spot with a win over North Macedonia on Monday.

“We were about to get a penalty and then suddenly we concede a goal,” said Flick, who took over from Joachim Loew earlier this year. “But the team fought, the boys threw everything they had in the game and the fans supported us.

“We were confident, kept trying. Some things in terms of precision were not as we wanted them and we must improve but it was a deserved win. We controlled the game throughout.”

The hosts had the upper hand and thought they were awarded a penalty in the opening minutes when Timo Werner went down in the box only for a VAR review to rule against it.

To make matters worse for Germany, the visitors struck with their first chance as Ianis Hagi took on two defenders, slipped the ball through the legs of Antonio Ruediger and then drilled in for the lead in the ninth minute.

Germany had possession and full control, spending most of the first 45 minutes in the Romanian half but lacking some clinical finish, with Serge Gnabry and Leon Goretzka coming close.

They did, however, repeatedly look vulnerable when Romania counter-attacked, as they had done with Hagi to take the lead.

Gnabry did find the deserved equaliser in the 52nd, firing in a low shot from the edge of the box for his 20th goal in his 30th international appearance.

Flick had pledged a high intensity performance from his team and the 25,000 fans got their money’s worth with the hosts combining well and attacking as Romania, defending with five players, gradually grew tired and pulled back deeper into their own half.

After Gnabry and Kai Havertz came close, Germany, with more than 70 per cent possession throughout the game, got the winner when Mueller, who had come on midway through the second half, tapped in at the far post after Goretzka headed on a corner.

Davy Klaassen scored the only goal as the Netherlands beat Latvia 1-0 away in Riga to keep themselves ahead in a tight qualifying group.

Klaassen was unmarked at the back post to tuck away Memphis Depay’s corner after 19 minutes for the lone goal of the game, although the Dutch did dominate with almost relentless attacks in the closing 20 minutes and might have won by a larger margin.

The Netherlands advanced to 16 points in Group G, two ahead of Norway and four in front of third-placed Turkey after those two countries drew 1-1 in Istanbul at the same time.

A Daniel James strike helped Wales fight back to draw 2-2 with the Czech Republic in an entertaining match in Prague after the visitor’s goalkeeper had gifted the hosts a second-half lead.

Wales opened the scoring in the 36th minute on the counter-attack when Aaron Ramsey fired home from a sharp angle after a James header from a long Neco Williams pass found the Juventus midfielder at the far post.

The hosts responded less than two minutes later when Welsh goalkeeper Danny Ward palmed an Antonin Barak shot into the path of Jakub Pesek, who swept the ball into the net to level the score.

The Czechs took the lead just after the break when Ramsey played a simple back pass to Ward who failed to control the ball and watched it dribble over the line in a match in which both sides created chances.

The visitors levelled in the 69th minute after substitute Harry Wilson slotted a through ball to James who drove a shot past Czech keeper Tomas Vaclik into the far corner.