She will take on Czech Karolina Pliskova in the last four 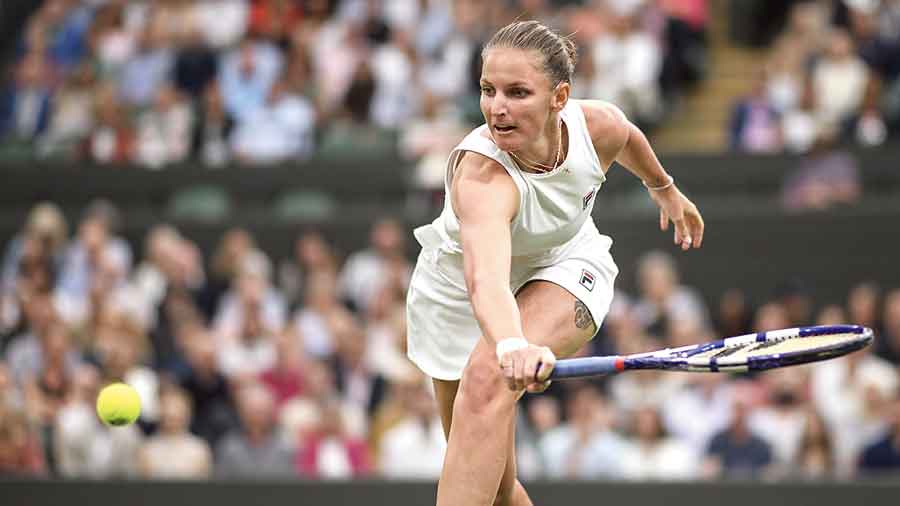 Karolina Pliskova hits a backhand during her match against Viktorija Golubic on Tuesday.
Getty Images
Agencies   |   London   |   Published 07.07.21, 01:23 AM

She will take on 2018 champion Angelique Kerber. In the other last-four encounter, second seed Aryna Sabalenka will face Czech Karolina Pliskova, a former world No.1.

While the top two women’s seeds are through to the semi-finals, if top seed Novak Djokovic looks at the men’s quarter finalists, he will find Roger Federer, the sixth seed, as the closest.

Second seed Daniil Medvedev, unlike Sabalenka, could not go past 14th seed Hubert Hurkacz after the pair returned on Tuesday to finish their Monday’s rain-hit match.

In the first all-Australian women’s grand slam quarter final since the 1980 Wimbledon, 25-year-old Barty produced a calm and composed display on Centre Court.

Earlier, Sabalenka proved too powerful for Tunisian Ons Jabeur, as she stormed into the semi-finals with a 6-4, 6-3 victory under the Centre Court roof.

The 21st seed Jabeur had made history by becoming the first Arab woman to reach the Wimbledon quarter finals.

It took Pliskova almost a decade of trying before she finally reached the semi-finals here, with a rapid-fire 6-2, 6-2 win over little-known Swiss Viktorija Golubic.

Neither player had even made it to the last eight of Wimbledon before but it was Czech Pliskova, a former world No.1, who made her greater big-stage experience count.

Former champion Kerber of Germany put on a strong show to beat an error-prone Karolina Muchova 6-2, 6-3.

The 2018 champion, seeded 25th at the All England Club this year, never lost control of the match under the closed roof of No.1 Court.

Hurkacz ousted Medvedev 2-6, 7-6 (7-2), 3-6, 6-3 6-3 to reach his maiden major quarter final where he will meet eight-time Wimbledon champion Roger Federer. Federer is on the hunt for his record-extending 21st grand slam and ninth Big W title.

World No.2 Medvedev was leading Hurkacz two sets to one on Monday with the fourth set on serve when play was cancelled for the day because of rain.

But the 24-year-old Hurkacz, seeded 14th, looked a completely different player when the match restarted under the closed roof of Centre Court. The Pole broke the Russian’s serve twice in the deciding set and wrapped up the contest on his first match point when Medvedev found the net with a forehand volley.