Tokyo Paralympics: It was not my best performance, says Sumit Antil after winning gold with world record throws 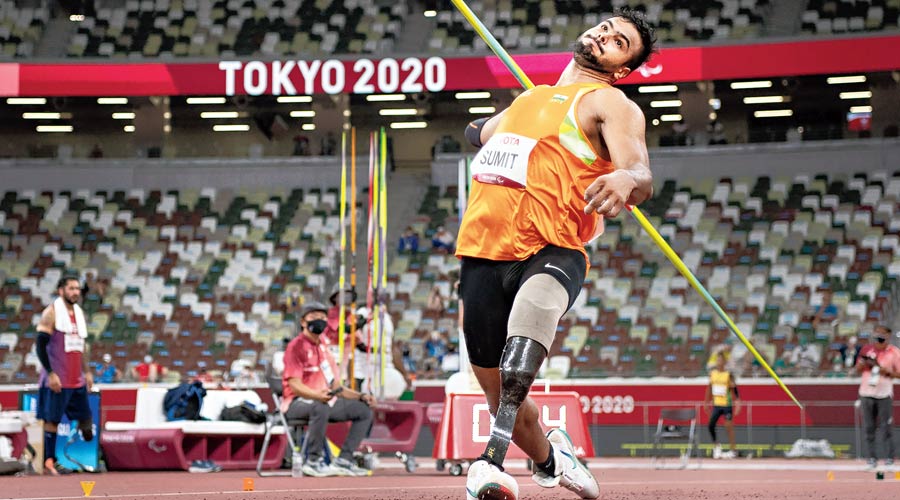 Sumit Antil was on a record-breaking spree on Monday. The javelin thrower in the F64 category broke his record multiple times to win the gold at the Paralympic Games in Tokyo.

His third and fourth throws were 65.27 and 66.71 respectively while the last one was a foul.

The F64 category is for athletes with a leg amputation, who compete with prosthetics in a standing position.

For the record, Sumit had competed against Neeraj in the able-bodied Indian Grand Prix Series 3 on March 5 in Patiala. He had finished seventh with a best throw of 66.43m, while Neeraj shattered his own national record with an effort of 88.07m.

Sumit thought he could have done better. “In training, I have thrown 71m or 72m. I don’t know what happened today (Monday). One thing is for sure: In future I will throw much better. This is my first Paralympics and I was a little nervous because the competitors were tough. I was hoping for a 70-metre-plus throw, maybe I can do 75m. It was not my best, but yes I am very happy to break the world record,” Sumit was quoted as saying by the tournament website.

Sumit has a habit of making the javelin travel far. A few months before the Tokyo Paralympic Games, within a span of 20 days, he had broken the world record twice in his category. In his sixth and last attempt he hurled the javelin to a distance of 66.90 metres at the 19th Para-Athletics Championships in Bangalore in the last week of March. That bettered his own world record of 66.43 metres, set in Patiala.

Hailing from Sonipat in Haryana, Sumit, who studied at New Delhi’s Ramjas College, used to be a wrestler before his world came crashing down on January 5, 2015. While coming back from tuitions he met with an accident. He was shifted to the Army Hospital (his father was in the air force) and Sumit’s left leg had to be amputated below the knee.

After a rest of almost two months, he was given a prosthetic leg at the Artificial Limb Centre in Pune.

His dream of becoming a champion wrestler in tatters, Sumit, on an advice from a para-athlete, got lured into the sport in 2018.

It was tough for him initially as he battled pain and loss of blood because of his prosthetic leg. But, Sumit refused to be cowed down and pursued his dream. And on Monday he proudly said: “You know it is a dream come true. I can’t express my feelings right now, it’s yet to sink in.”