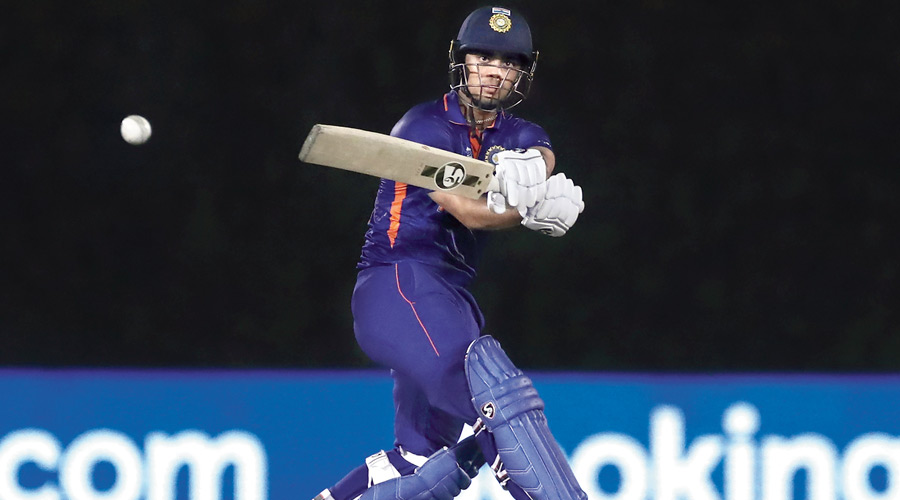 Young Ishan Kishan made a fine impression in India’s first warm-up game ahead of the T20 World Cup, smashing his way to a 46-ball 70 versus a Jos Buttler-led England at the ICC Academy ground in Dubai on Monday.

Kishan didn’t have a great time with the bat in the early stages of the recently-concluded IPL. But he seems to have regained the touch with half-centuries in Mumbai Indians’ last two matches.

A tad watchful at the start, the left-hander hammered seven fours and three big sixes which laid the platform for India, who eventually overhauled England’s 188/5 with an over to spare and seven wickets in hand. On reaching 70, Kishan then headed back to the dugout, giving his Mumbai Indians teammate Suryakumar Yadav some time to bat.

Though captain Virat Kohli (12) said at the toss that “it’s difficult to look beyond KL Rahul” as the other opener owing to his current form alongside Rohit Sharma, Kishan’s knock may to an extent brighten his prospects of finding a berth in the final XI. Particularly with Suryakumar scoring only eight.

If Kishan gets runs again in the next warm-up game versus Australia on Wednesday, he could well come into contention at least for India’s tournament opener versus Pakistan in Dubai on Sunday.

Kohli also made it clear that he would be batting at No. 3. “Things were different before IPL. Now it’s difficult to look beyond KL at the top of the order,” the skipper said.

“Rohit is a no-brainer. A world-class player, he has been solid upfront. I will be batting at No. 3.”

Rohit didn’t feature in this warm-up game, but Rahul (51 off 24 balls) continued from where he had left off in the IPL. His exquisite timing and placement, which were again the hallmark of his knock, should reduce the pressure to a fair extent off vice-captain Rohit.

“We are pretty sorted in terms of how we are going to start in the first game (versus Pakistan),” Kohli emphasised. “The objective behind the warm-up matches is to give game time to everyone as they get back into the groove after a short break.

“Outside of that, we just want to give opportunity to the guys as much as possible.

The idea is to create some energy and momentum as a team,” he added.

Jasprit Bumrah (1/26) bowled a tight, disciplined line as usual, while Mohammed Shami too looked sharp, striking thrice. But Bhuvneshwar Kumar’s form continues to be a concern.

Bhuvneshwar didn’t seem to be one bit settled, going wicketless and conceding as many as 54 in his four overs.