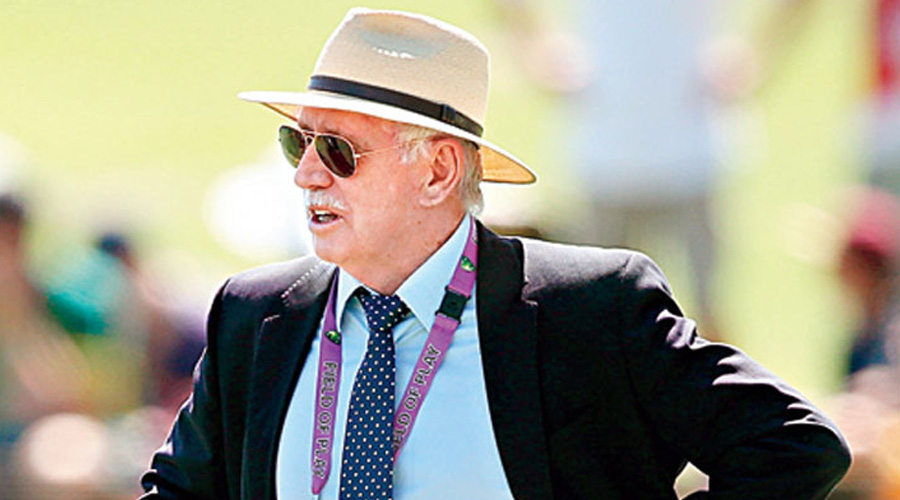 The legendary Ian Chappell believes the ever-growing T20 format is increasingly casting a dark shadow over Test cricket, especially in the current chaotic scenario in wake of Covid-19 pandemic.

Chappell said T20 has an edge over the traditional format because of the short duration of time needed for the completion of a game.

"There's a T20 World Cup to be played in the UAE and then, after some spirited negotiations, hopefully a credible Ashes series in Australia. The difficult negotiations over the Ashes series were mostly brought about by the Covid pandemic, but more and more the T20 format is casting a dark shadow over Test cricket," Chappel wrote in a column for ESPNcricinfo.

"T20 tournaments involving countries require only days to complete and therefore are far easier to negotiate in the current chaotic climate than a long Test series.

"Because of the short time-span involved, T20 is a game better suited than Test matches to countries that are not traditionally cricket-playing nations. Hence the involvement of tyros like Oman and Papua New Guinea in the upcoming T20 tournament."

The Australian great said the T20 format is more lucrative and alluring for players.

"The T20 format is also more lucrative and popular when compared with Test cricket in countries other than Australia and England. Considering most administrators are myopic when it comes to matters other than the bottom line, this is a critical point in any planning for the game's future.

"The cost of the infrastructure required to produce Test players is prohibitive to non-traditional cricket countries. On the other hand there's a good chance they can run a T20 competition and actually attract fans - which will provide an income stream," Chappell explained.

"Even if a non-traditional country does not have their own T20 competition, their better players have an opportunity to earn a living by playing in overseas tournaments."

Chappell feels Test cricket will continue to survive but going forward it will remain restricted among traditional cricketing nations.

"All of these factors point to future Test series being mostly played among the traditional cricket countries. It's hard to see the long form of the game prospering in the latest Test-playing nations, Ireland and Afghanistan," he said.

"They don't have a first-class infrastructure capable of supporting a player development system of any great depth. There's also an inclination among the older Test-playing nations to avoid contests against these newer teams where possible, as they are generally a costly proposition.

"It's a bleak picture for Test cricket, which has been exacerbated by the pandemic-created chaos."

Chappell also called on the administrators of the game to work on the crowded international schedule keeping players' mental health in mind.

"Players are now - as they should be - less reluctant to speak out and act on mental health issues. This is going to be critical in future planning.

"Not only do administrators need to give serious thought to what for too long has been an absurdly congested schedule but hitting the right balance between financial needs and player welfare will also require some creative thinking," he pointed out.

The 78-year-old feels a system where weak nations can hire players from other countries can make the tarditional format more competitive and address the current imbalance among Test playing countries.

"That could mean introducing a draft system whereby the weaker Test teams can acquire outstanding players from other countries to boost their competitiveness. This could be a way for talented players from outside of the Test-playing nations to experience the thrill of the longer game," he wrote.

"The current imbalance between the strong and weak Test-playing countries is another hindrance in promoting the five-day game. Creating a balance between the financial rewards of T20 and the need to fully Test players in longer contests is a big challenge."