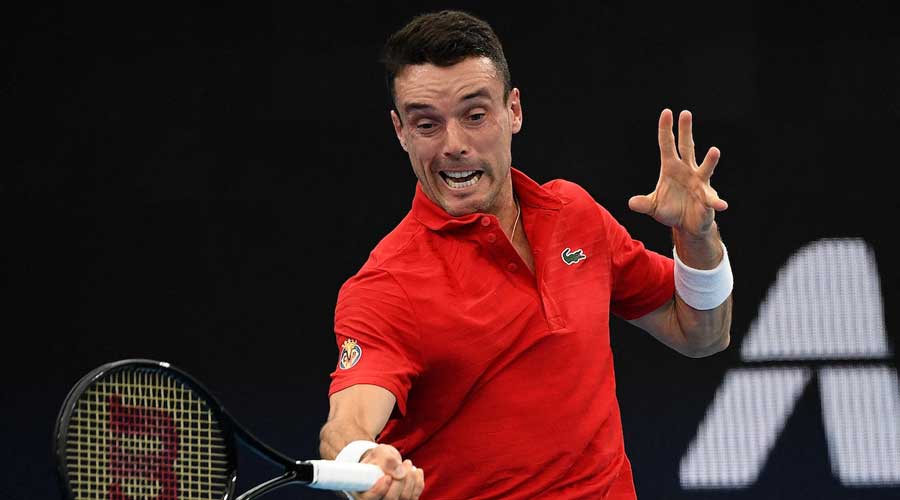 Spain and Argentina both won their ATP Cup ties with some ease as men’s professional tennis returned for the 2022 season in the lucrative team tournament
at Sydney’s Olympic Park on Saturday.
Spain’s Roberto Bautista Agut and Pablo Carreno Busta made light of the absence of Rafael Nadal with contrasting victories over Chileans Cristian Garin and Alejandro
Tabilo.
Carreno Busta was forced to come from 0-3 down in both sets, and again from 1-3 in the decisive tiebreak, before overcoming tricky lefthander Tabilo 6-4, 7-6 (4) in the first match of the year on Ken Rosewall Arena.
Bautista Agut then steamrollered world No. 17 Garin 6-0, 6-3 to give the Spaniards an unassailable lead in the Group A tie before Alejandro Davidovich Fokina and Pedro Martinez made it a 3-0 sweep with a tough 7-6(3), 4-6, 10-7 win over Marcelo Tomas Barrios Vera and Alejandro Tabilo.

“It was very early on the first day of the year to play tennis,” said Bautista Agut, the world No. 19. “Today was a good start for me, I played a very solid game, I felt I had a good rhythm, a good speed on the ball, I’m really happy.”

Federico Delbonis earlier made light work of Aleksandre Metreveli with a 6-1, 6-2 win at the Sydney Super Dome to give Argentina a 1-0 lead in their Group D tie against Georgia.
Diego Schwartzman then trounced Nikoloz Basilashvili by the same score before Maximo Gonzalez and Andres Molteni beat Zura Tkemaladze and Saba Purtseladze, again 6-1, 6-2, in the doubles to complete the 3-0 win.

No Tsitsipas
In the evening session, Greece fell to a 1-2 loss to Poland as world No.4 Stefanos Tsitsipas pulled out of his singles match with Hubert Hurkacz due to a niggling right elbow issue.
Kamil Majchrzak gave Poland the lead with a comfortable 6-1, 6-4 win over Michail Pervolarakis before world No.9 Hurkacz swept aside Tsitsipas’ replacement, Aristotelis Thanos, 6-1, 6-2.

“I was expecting to play Stefanos and I was preparing tactics with my coach and Marcin (Matkowski), so it was difficult when I found out,” said Hurkacz.
“I’d never played (Thanos) before, or seen him play. He had a big serve and fortunately, I was returning quite well and put pressure on him.”

Tsitsipas, however, returned for the doubles rubber, partnering Pervolarakis to claim a hard-fought 6-4, 5-7, 10-8 win over Hurkacz and Jan Zielinski.
In the other Group A encounter, Filip Krajinovic and Nikola Cacic helped Serbia, who are without world No.1 Novak Djokovic, earn a 2-1 victory over Norway after downing Casper Ruud and Viktor Durasovic 7-6(3), 6-3 in the doubles decider.

The two teams had shared the singles rubbers, with Krajinovic overcoming Durasovic 6-2, 7-5 in the opening match before world No.8 Ruud saw off a spirited challenge from Dusan Lajovic 6-3, 7-5 to level things up.

“It was a high-quality match from the beginning until the end,” said Ruud.  “Near the end I got a bit nervous... I haven’t been
playing matches for four or five weeks now, so it is a bit difficult to get that rhythm going.”

The third edition of the $10 million tournament has 16 teams divided into four groups playing at two venues at Sydney’s Olympic Park.
The absence of Djokovic, Nadal and Roger Federer for various reasons has robbed the event of some sparkle, but 14 of the world’s top 20 players are in action as they prepare for the start of the Australian Open on January 17.

Daniil Medvedev, second in the world rankings behind Djokovic, will represent champions Russia in their opening Group B tie against France on Sunday.