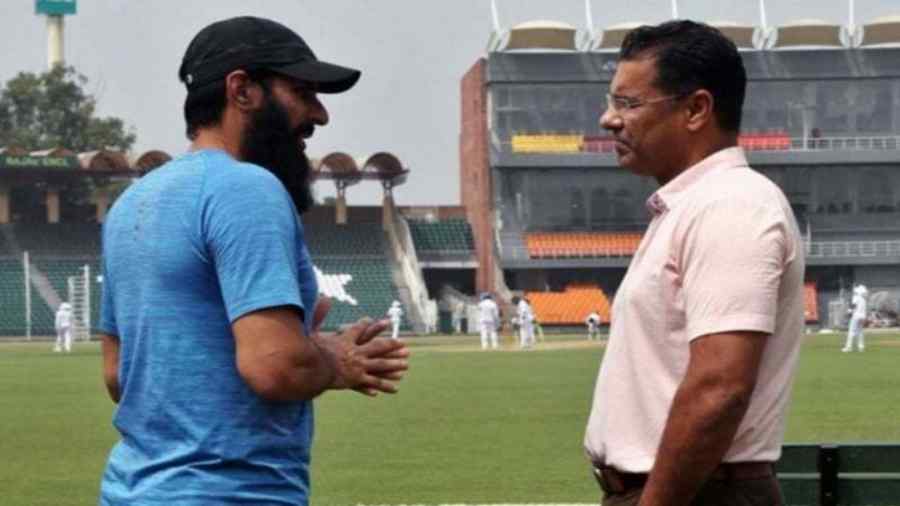 In a shocking decision, Pakistan head coach Misbah-ul-Haq and bowling coach Waqar Younis have stepped down from their respective roles one month before the T20 World Cup.

The Pakistan Cricket Board on Monday announced that Misbah and Waqar have resigned and that former Pakistan Test players, Saqlain Mushtaq and Abdul Razzaq would be interim coaches for the time being.

The sudden changes coincide with the induction of former Test captain Ramiz Raja as the new Chairman of the board on September 13.

Ramiz on his YouTube channel and as a commentator and analyst has maintained that he does not believe Misbah and Waqar are the best coaches for the Pakistan team.

Even the World Cup squad announced on Monday bears the influence of Ramiz in the selection process as he has been inclined towards younger players and power hitters in the T20 format.

"Considering that I would have had to continue to spend considerable time away from my family in a bio-secure environment, I have decided to step down from the role," Misbah said in a statement.

Waqar said that after Misbah shared with him his decision and future plans, it was a straightforward decision for him to resign as they had walked into the roles together, had worked as a pair and now also stepped down together.

The PCB said that Saqlain and Razzaq will join team management as interim coaches for the New Zealand series.

Misbah and Waqar were appointed in September 2019 and still had a year each left in their contracts.

The changes come with the New Zealand side due to arrive on September 11 for three ODIs and five T20Is and the Pakistan side to assemble in Islamabad on September 8.

The PCB said that the team management for the ICC Men's T20 World Cup will be appointed in due course.

In his statement, Misbah, a former skipper said: "The quarantine in Jamaica post the West Indies series provided me with an opportunity to reflect on the past 24 months as well as the schedule for international cricket ahead.

"Considering that I would have had to continue to spend considerable time away from my family and that too in a bio-secure environment, I have decided to step down from the role.

"I understand that the timing may not be ideal but I don't think I am in the right frame of mind for the upcoming challenges and it makes sense for someone fresh to step-in and take the side forward."

Misbah was initially also appointed as chief selector with his head coach position in 2019 but had resigned last year from the selection job citing a heavy workload.

Waqar Younis said working with the Pakistan bowlers, including the youngsters, has been the most satisfying thing for him as they have now started to show progress.

"Bio-secure environments in the past 16 months have had their impact, something we had never experienced during our playing days," he said.

"The next eight months will be busy and exciting for the Pakistan team and, like in the past, I will continue to back and cheer them on. I want to thank each and every member of the Pakistan cricket team set-up as we stayed united in good and bad days, and hope there will be brighter days ahead."

"Cricket in this unprecedented bio-secure world has not been easy for anyone and Misbah has clearly taken into account the intense six months of non-stop cricket ahead.

"Both Misbah and Waqar have given so much to Pakistan cricket over a long period of time and for that they deserve a huge amount of respect."

Wasim Khan said that Saqlain and Razzaq have been appointed as interim coaches for the New Zealand series.

Saqlain is the Head of International Player Development at the National High Performance Centre, while Razzaq's domestic side won three titles in the 2020-21 season.

"Both Saqlain and Razzaq are ready to step-up and are very much looking forward to making important contributions in their coaching roles against New Zealand."