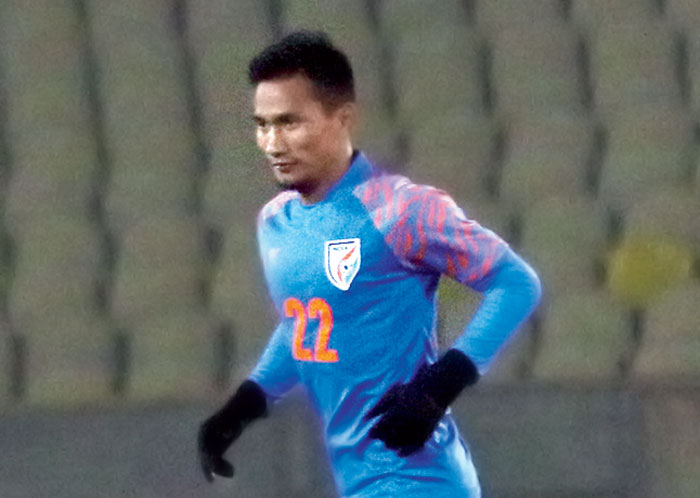 As a teenager, Doungel had started his senior club career in East Bengal in 2011. He played under Morgan for multiple years.

“I am glad for him. For me he was always a central striker... He was very young when he played for East Bengal. But now playing in the Indian Super League (ISL) he has improved through playing with better players,” Morgan told The Telegraph from Perth on Friday.

“He was direct, strong, aggressive and good in the air for his size. With time, he has sharpened his skills,” Morgan said.

The former East Bengal coach also feels Doungel has the potential to play better. “As long as he keeps a good attitude and takes advice from his teammates and coaches, he will get better,” he said.

Doungel, who was introduced in the 77th minute, scored his first international goal on Thursday. He described it as a special moment of his career. “After every dark night, there’s a brighter day... Scoring a maiden International goal is one of the most special moments in a footballer’s life, but is even more special if your country can win from it,” the footballer tweeted after the game.

Doungel wants to continue the good work. “A footballer always nurtures a dream of representing his country. I’m no different and then scoring for my country when it was needed, gave me immense joy and satisfaction.

“But, it’s just the start of the journey for me. I need to keep my head down and continue the good work as long as possible,” Doungel said. India play their next match against Oman in Muscat on Tuesday.

Meanwhile, India coach Igor Stimac said he was “not afraid” to field a completely new team in the next Fifa World Cup qualifying-round match against Oman next Tuesday.

“We know for a fact that the match is going to be very difficult for us. We need to see how quickly we recover after the difficult game that we just played,” Stimac said.