Advertisement
Home / Sports / Liverpool roadmap on survival with the fittest

Liverpool roadmap on survival with the fittest 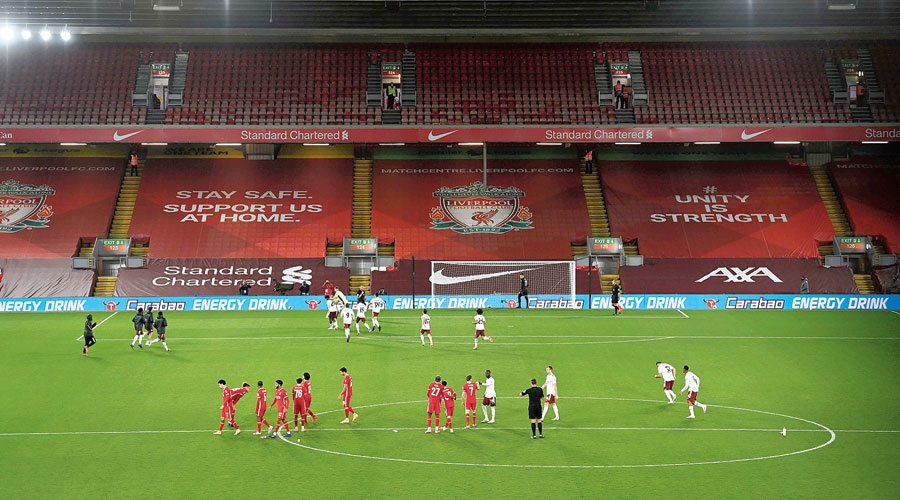 Liverpool will go through to the knockout stage from Group D if they avoid defeat by Ajax and will be group winners if they win and Atalanta fail to beat Midtjylland
File Picture
Reuters   |   Liverpool   |   Published 01.12.20, 03:43 AM

Liverpool manager Juergen Klopp says his mounting injury list ahead of Tuesday’s Champions League clash with Ajax Amsterdam means he does not have enough fit players to rotate his squad.

The latest player to be sidelined at Anfield is utility man James Milner, who suffered a hamstring injury in Saturday’s 1-1 draw at Brighton & Hove Albion.

Klopp said Spanish midfielder Thiago Alcantara remains out for a few more weeks and full back Trent Alexander-Arnold has not yet been given the green light to return to full training.

Asked if the busy schedule meant he would have to prioritise between European and domestic competition, Klopp said he never made such choices and that in any case he was in no position to rotate his squad.

“I don’t have enough players to prioritise. It’s not about the competition, it’s about the players. On Saturday the fittest players played,” he said.

Liverpool will go through to the knockout stage from Group D if they avoid defeat by Ajax and will be group winners if they win and Atalanta fail to beat Midtjylland.

L’dowski to be rested Bayern Munich goalkeeper Manuel Neuer plus top scorer Robert Lewandowski and midfielder Leon Goretzka will not travel with the already qualified team for the Champions League group game at Atletico Madrid on Tuesday.

Bayern coach Hansi Flick said on Monday that the trio were not at 100 per cent and would be rested with the European champions having secured a place in the knockout stage last week with a 3-1 home win over RB Salzburg.

“They will all be rested,” Flick said. “We try to do the best for the team. We have players with us who are all at 100 per cent and can deliver.”

France international Corentin Tolisso will also remain in Munich to recover from a minor injury and be fit for Saturday’s top-of-the-table Bundesliga clash at home to RB Leipzig. Pep’s point Manchester City manager Pep Guardiola has no intention of rotating his squad for Tuesday’s trip to Porto and says if players are left out of the line-up it is not because he is giving them a rest.