Following this win, Punjab have moved up to fifth in the points table with eight points from 10 matches, while the Sunrisers have been knocked out of the race to make the playoffs 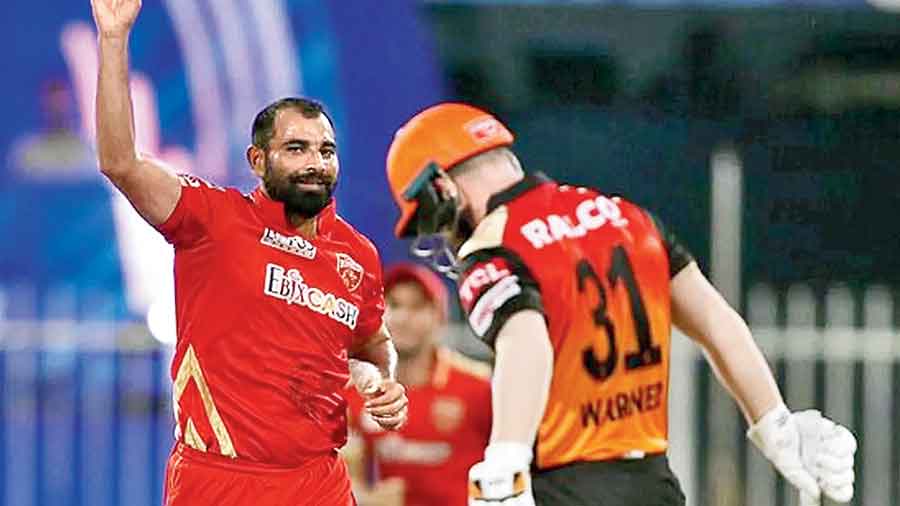 Jason Holder came close to single-handedly pulling it off for the Sunrisers Hyderabad but got no support from the other end as Punjab Kings prevailed by five runs in a low-scoring contest at the Sharjah Stadium on Saturday.

Following this win, Punjab have moved up to fifth in the points table with eight points from 10 matches, while the Sunrisers have been knocked out of the race to make the playoffs.

If the pitch in Abu Dhabi in the first game of the day was slow, the Sharjah track seemed even more sluggish along with a slower outfield as both teams found stroke-making quite difficult.

Put in to bat, Punjab somehow wobbled to 125/7, but the first spell of their spearhead Mohammed Shami (3-1-5-2) along with timely wickets by young leg-spinner Ravi Bishnoi (3/24) dented the Sunrisers’ progress. It was only due to Holder (47 not out)’s meaty blows that the Sunrisers could reach 120/7.

Holder and opener Wriddhiman Saha’s 32-run partnership for the sixth wicket did bring the Sunrisers back in the game. But just when it mattered, Saha was run out, having done the hard work on a difficult surface, making the job harder for Holder.

Some credit should also go to left-arm quick Arshdeep Singh and Nathan Ellis as they held their nerves while bowling at the death. But it was Shami who yanked out opener David Warner, whose rough patch gets extended, and captain Kane Williamson which served a massive blow to the Sunrisers. Bishnoi then accounted for Manish Pandey and Kedar Jadhav with the googly and forced Abdul Samad into a mishit.

Earlier, Holder (3/19) found the proper length to strike thrice while Rashid Khan (1/17) was at his economical best to help the Sunrisers restrict the opposition to 125/7. Sent in to bat, Punjab struggled on a slow wicket and failed to stitch any big partnership, with the highest being a 30-run stand between Chris Gayle and Aiden Markram.

Punjab’s biggest strength is their opening pair of captain KL Rahul and Mayank Agarwal, but the duo’s stay in the middle was cut short by Holder. Striking off his very first ball to remove the Punjab skipper, the former West Indies captain again foxed Mayank. Punjab were 29/2 after Powerplay and could have been three down in the next over had Warner not dropped Markram off Khaleel Ahmed.

Courtesy Harpreet Brar (18 not out) and Ellis (13), Punjab could somehow go past the 120-run mark. They hit 14 off Bhuvneshwar Kumar in the final over of their innings.