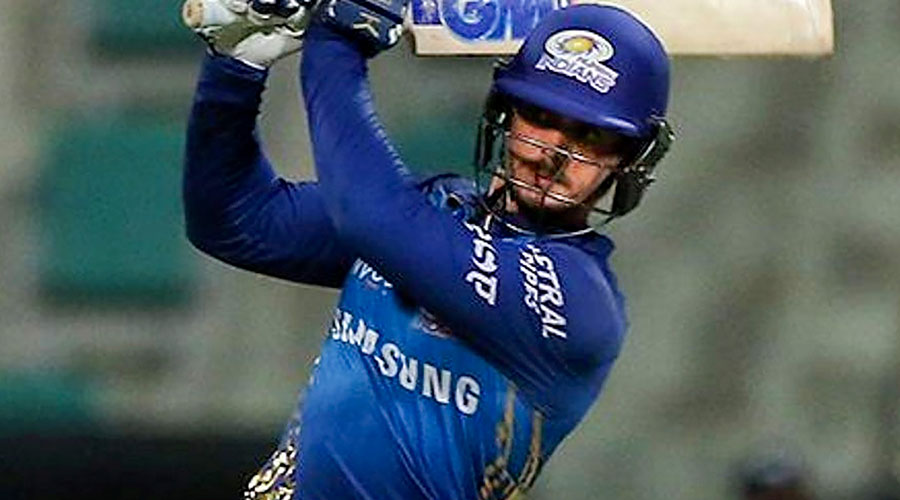 Change of captaincy did not translate into change of fortune for Kolkata Knight Riders as Mumbai Indians mauled them by eight wickets in Abu Dhabi on Friday.

The Knights were on their knees from the very start as they were reduced to 61 for five at one stage. Courtesy repair work from new captain Eoin Morgan and all-rounder Pat Cummins, they put up 148 for five in 20 overs.

But that did not look enough against the powerful batting line-up of Mumbai Indians and it turned out exactly so as they wrapped up the match with 19 balls to spare.

Quinton de Kock played a masterful knock of 78 not out off 44 balls, while captain Rohit Sharma made an uncharacteristic 35 off 36 balls. But then, with De Kock on song, he did not need to take risks.

None of the KKR bowlers managed to make an impact as De Kock and Rohit put up a 94-run opening stand.

“We weren’t even in the race today. We got a score to bowl at in the end, but the way Mumbai got off, it was tough to stop them,” admitted Morgan.

KKR wouldn’t have been able to reach a respectable total had it not been for an 87-run unbroken partnership between Cummins and Morgan. Cummins struck an invaluable 53 not out off 36 balls and Morgan contributed 39 not out off 29 to rescue them after an unexplained batting collapse.

Opting to bat, KKR lost opener Rahul Tripathi (7) early, courtesy a sensational catch by Suryakumar Yadav at point, in the third over off Trent Boult.

Moments later, it became 33 for two as Nitish Rana (5) perished cheaply caught by Quinton de Kock off Nathan Coulter-Nile as the short ball worked for the Australian pacer.

Leg-spinner Rahul Chahar (2/18) then got into the act, striking twice in the eighth over, removing the young Shubman Gill (21) and Dinesh Karthik (4) off successive balls. While Gill holed out to Kieron Pollard at long-on in an attempt to accelerate the run-rate, Karthik played on trying an over-ambitious shot.

Andre Russell perished for 12. A bouncer from Jasprit Bumrah did the trick as the West Indian offered a sitter to De Kock.

Cummins got into the act smashing Nathan Coulter-Nile for two fours and a six in the 13th over, which fetched KKR 16 runs and then made optimum use of a life he got.