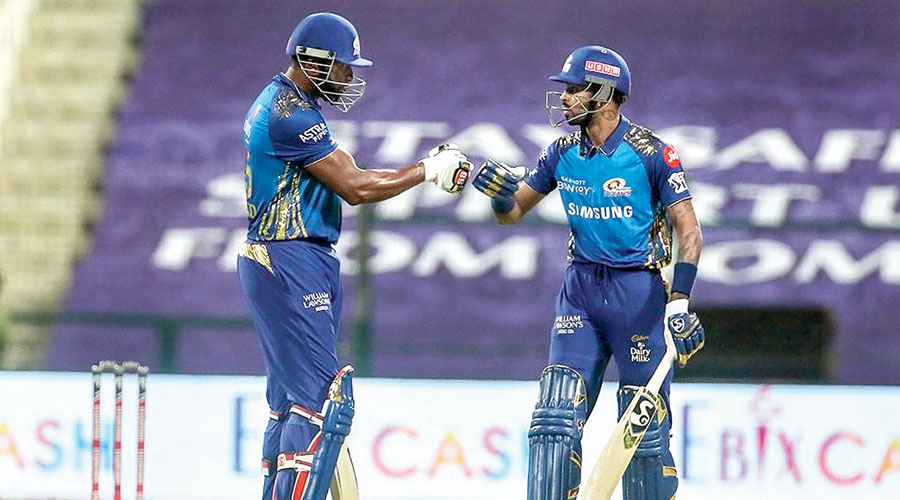 Mumbai Indians outplayed Kings XI Punjab in all departments of the game to post a convincing 48-run win at the Sheikh Zayed Stadium on Thursday. And with that they climbed to the top of the points table as well.

For the Kings XI, this was their second straight defeat after failing to defend 220-odd versus Rajasthan Royals at Sharjah and third overall. Following this loss, they slumped to sixth in the standings.

Once again, Kings XI’s poor death bowling, coupled with some superb stroke play from Rohit Sharma (70 off 45 balls) and power-hitting by Kieron Pollard (47 not out off 20 balls) and Hardik Pandya (30 not out off 11 balls), helped Mumbai Indians plunder 89 off the last five overs to propel their total to 191/4 after being put in.

Barring Sheldon Cottrell (1/20 off four overs), who unleashed a perfect delivery to clean up a struggling Quinton de Kock as early as the fifth ball of the game, the rest of the Kings XI bowlers, including senior India pro Mohammed Shami, were mediocre on the day.

Credit must go to the Mumbai Indians skipper Rohit for staying calm even when his team went through a difficult phase, till the 14th over, when they were three down for 83.

Even though Mumbai Indians’ scoring rate was just above six during that period, Rohit executed some delightful strokes. Suryakumar Yadav’s early departure and Ishan Kishan’s scratchy work did affect Mumbai Indians’ progress. But when Pollard arrived after Kishan’s dismissal, Rohit, who also reached 5,000 IPL runs, found the going much easier and was able to press on the accelerator.

The onslaught began from the 16th over when Jimmy Neesham went for 22, with Rohit alone hammering 21 of them. Rohit fell off Shami’s bowling just as he was looking more dangerous. But there was no respite for Kings XI as Pollard and Pandya went hammer and tongs after their bowlers.

Chasing hasn’t been easy, particularly in Abu Dhabi and Dubai. And just like some of the other teams had found out in the previous games, it was the Kings XI’s turn this time to face the heat.

The in-form Rahul and Mayank Agarwal did get Kings XI off to decent start, getting 33 off the first three overs of their run chase. But Krunal Pandya kept the fourth over tight, conceding only three and in the very next over, Jasprit Bumrah (2/18 off four overs) shaped one a little bit in towards Mayank and castled him.

With Mayank’s problems with the incoming delivery continuing, Krunal and leg-spinner Rahul Chahar (2/26 off four overs) struck quickly to remove Karun Nair and Rahul, respectively, as Kings XI wobbled at 60/3 in the ninth over.

Nicholas Pooran did make an attempt, but Glenn Maxwell’s lean patch in this IPL continued. It’s clear that he is yet to come to terms with the UAE conditions, which doesn’t augur well at all for his team.